While presenting the 2021/22 Financial Year budget on Thursday, the newly appointed State Minister of Finance in charge of planning, Amos Lugolobi said that since last year, the economy has remained resilient and is on a recovery path amidst the ongoing pandemic and other shocks experienced overtime.

The manufacturing has significantly diversified into many new products such as ethanol from sugar and powdered milk from dairy.

Lugolobi said the mining sector continues to be a major contributor to Uganda’s economy.

“The contribution of the Mining and Quarrying industry to GDP increased from 1.1% in 2016/17 to 2.3% in 2020/21. This development is a result of the use of online mineral licensing, the biometric registration and training of 13,000 artisanal miners, and the construction of regional mineral beneficiation centers.”

More mineral beneficiation centers are, according to Lugolobi, under construction such as the ones in Fort Portal, which is 65% complete and Ntungamo which he said is 90% complete.

“The Agricultural sector’s contribution to the economy has stagnated at around 23% over the last five years, which requires increasing the pace of industrialisation. Nonetheless, there has been increased production of agricultural commodities, including for export,” he said.

“The international trade continued to flourish despite the COVID-19 pandemic,” Lugolobi said.

Lugolobi stressed that coffee remains the leading agricultural export earning US$497.4 million in the Financial Year 2019/20.

Fish exports earnings increased from US$121 million to US$227 million, over the same period.

“Annual tourist arrivals also increased from 1.3 million to 1.5 million during the same period. This is a result of the sustained investments in the development and rehabilitation of tourism infrastructure and product diversification,” said Lugolobi.

However, Lugolobi said, the outbreak of COVID-19 has caused a huge set back to tourism.

“Uganda’s per capita income is increasing steadily. In Financial Year 2015/16 it was US$808 and is projected to increase to US$932 in Financial Year 2020/21. We expect to achieve middle- income of US$1,039 within the third year of NDP III implementation,” the Minister said.

The key reasons why Uganda did not attain a middle-income status by 2020, Lugolobi noted, are; lower than expected productivity especially in agriculture; inefficiencies in public investments resulting in less-than-optimal returns and the shocks from natural disasters especially in the last two years.

The post Budget: Gov’t Projects the Economy to Grow by 3.3% in FY 2021/22 first appeared on ChimpReports.

The government on Sunday announced that it would not use the direct food distribution system to those affected by the Covid-19 lockdown but will instead send them direct cash.

Prime Minister Robinah Nabbanja said the national taskforce on Covid-19 has agreed to send the vulnerable people money via mobile money platform or the voucher system for those without mobile phones.

The Prime Minister said a committee will sit on Tuesday to determine the amount that will be given and when people will start getting the support.

This comes after President Museveni on Friday announced a total lockdown to contain the surging Covid-19 cases by halting public and private transport and restricting other businesses. He also brought down curfew time to 7pm from 9pm.

During last year’s Covid-19 induced lockdown, the government distributed food to the urban poor but many people did not receive the portions while others received half of it. 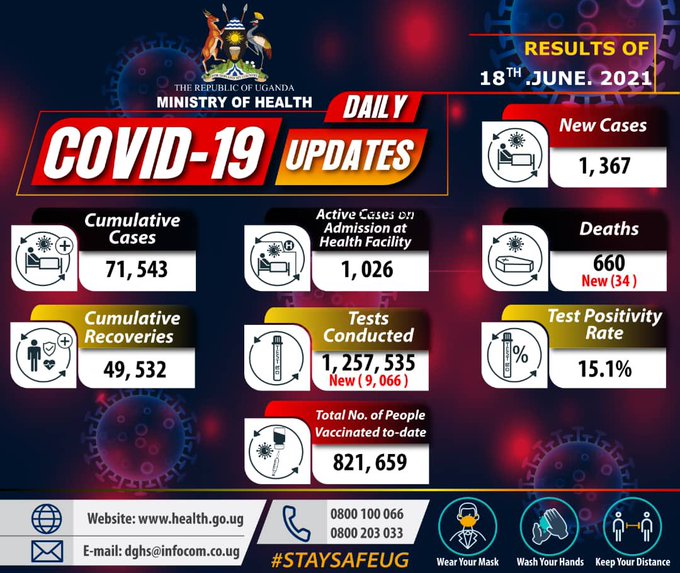 Auditor General John Muwanga reported that items valued at 55.8 billion Shillings which were distributed under the Office of the Prime Minister (OPM) lacked sufficient evidence of acknowledgement to enable him verify the recipients.

The government on Sunday reported 1,367 new infections and 34 new deaths, pushing the cumulative total of infections to 71,543 and deaths to 660.


His reformist zeal saw him win the 2019 Nobel Peace Prize, but just a year later, he waged a military operation in his own country – deploying troops to Tigray to oust the TPLF as the region’s ruling party after it seized military bases in what Mr Abiy saw as a bid to overthrow him.

Parliament has scheduled today Monday 21, 2021 for the inauguration of the new cabinet ministers.

For the whole of last week, 79 ministers were vetted by Parliament’s Appointments Committee led by Deputy Speaker Anita Among.

Two other appointees missed out reportedly due to health related challenges.

The swearing in event is being conducted with extreme caution by ensuring that all in attendance are free of Covid19.

President Yoweri Museveni was on Friday 18 forced to lock the country after fatalities of the novel virus spiked again.

Earlier on, Parliament was forced to scale down its work force after rumours that over 100 Members of Parliament were battling Covid-19.

The Institution’s Director of Communications Chris Obore however clarified on Friday that those affected attended crowded events; The State of Nation Address (SONA) and Budget Reading events.

Obore refuted allegations the one hundred cases were from a sample of more than 3000 and disclosed that some had already recovered.

The post New Cabinet to Be Sworn-In Today first appeared on ChimpReports.