Clad in a crisp clean white long-sleeved buttoned shirt, navy blue trousers and brown moccasin shoes, Katumba wears a smile as soon as I walk into the room with Deejay Crim.

The night before, Crim – a renown deejay and musician with whom I’ve built a really good friendship – invited me to his video shoot.

His song dubbed Katumba Oyee! has been slowly making its way into people’s hearts since release. As you may already know, it’s a song made for John Katumba’s campaign trail.

John Katumba is a young gentleman who has gained popularity in Uganda having stood for presidency. His character and life story have won him various fans already.

By the virtue that he is a presidential candidate, he is heavily guarded by armed security personnel in anti-terrorism police uniform.

I arrive at the venue, Racers Bar Bukoto, on a Thursday afternoon, anticipating to meet the man that has been grabbing headlines in past months.

Katumba seems like he already knows me as Deejay Crim introduces me to him as “Josh Ruby, a renown blogger from mbu.ug”.

Katumba wears his trademark smile and says, “Ogambaki boss?” “Ndi steady, gyebaleko boss”, I reply. I continue to greet the rest of his team.

Minutes later, the choreographer calls upon Katumba to go through a bit of the dance routine that will be showcased in the video.

“You know I can dance. Let me show you.” Katumba says as he quickly grasps the simple routine, very much the the pleasure of the choreographer.

As it has become a norm of myself, I pull out my smart phone to put my camera to use and take a few shots of him dancing. He tells the other people not to use their cameras but lets mine roll.

At this point, I know I’ve earned my place in State House if he ever makes it there. So I keep shooting, feeling like I have been around him enough and earned the authority.

In part of his life story, Katumba has been part of the music industry as a music promoter and singer before opting for the top office in the country.

Here I am witnessing that he can dance, that’s a fact. You can add that to his talents.

At around 2:00pm, the cameras start rolling as Biko Visuals gets to work. The dancers get on set first and play their role for the next hour.

Katumba later joins as people start converging in the area to have a look at the famous Katumba. He goes through different scenes, alternating his wardrobe and showing off some boss moves.

For a first impression, I am convinced that Katumba is a likeable character, down to earth and very willing to get involved with whatever the people put forward to him.

He is also extremely shy and at some point when the vixens get so close and start touching him, he shyly smiles and hides his face very much to the amusement of everyone looking at him.

The short behind the scenes clips which I later share online go viral which continues to assure me that even if it might seem clear that the presidential race is aggressively between two top figures, Katumba won’t walk away empty handed when the curtains close.

I leave the scene contented that the 24-year-old’s character is a major force in his life and he is destined for even greater things in years to come.

While speaking in an interview on a local television, Cindy narrated that UMA is neither a relief nor a charity organization. It’s just an umbrella that brings together musicians to have a collective voice and preserve the music in Uganda.

“Artistes are so hungry that if you don’t show up with bread, they don’t listen to you. UMA is not a relief or charity organization. I don’t want them to expect that I will give them food,” she explained.

The Uganda Musicians Association (UMA) has had a number of presidents resigning before their terms end including Ykee Benda who resigned a few weeks back, but Cindy says she will not let anyone force her to quit.

Cindy noted that she’ll learn from her former superiors and do her job based on what they had gone through.

“I’m not a quitter because I have been in the industry for 15 years. I know the people before me have quit and I have always been around to witness this. I will learn from their mistakes and correct their fears,” She added.


Health Ministry Permanent Secretary Dr. Diana Atwine has urged Ugandans to embrace vaccination against COVID-19. She says government is committed to ensuring that all those that are at risk of severe COVID-19 disease are protected.

Vaccination against the coronavirus will start on March 10, 2021, the Minister of Health, Dr Jane Ruth Aceng revealed yesterday.

According to Atwine, vaccine is not mandatory and only those with NIN number will be vaccinated.

“Those with no NIN should endevour to get one because that is one mechanism we are ensuring that someone received the vaccine. It is accountability mechanism,” says Atwine.

She adds, “We are going to have a well-written consent form. When someone comes to the health facility, they will be taken through the consent process. All vaccinations against COVID-19 in public sector will be free.”

Phase 1 of the vaccination exercise will focus on: Health workers (Public, Private Not for Profit (PNFP) and Private for Profit (PFP)) estimated at 150,000, Security personnel (UPDF, Police, Prisons); estimated at 250,000, Teachers (Public and Private) among other essential social service providers; 550,000, Persons from the age 50 years and above, estimated at 3,348500 and Persons with underlying health conditions aged below 50 years, estimated at 500,000.

In Phases 2 and 3 of the COVID-19 vaccination program, the Ministry will roll out the vaccination program to age groups between 18 and 50 years in a staggered manner until 49.6% of the Ugandan population is vaccinated. This will be guided by the local epidemiology of the disease. 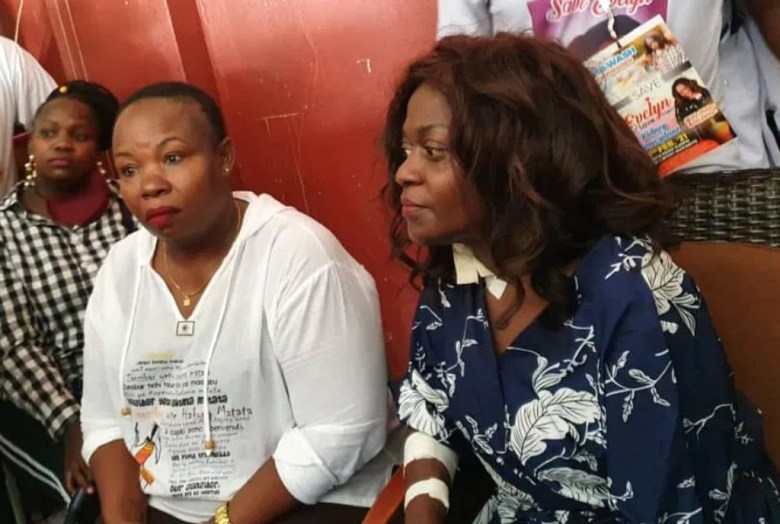 For those who have been wondering which religious group the president of local healers, Sophia Namutebi a.k.a Mama Fiina belongs to, you got served.

While at singer Evelyn Lagu’s car wash event, the popular head of traditional herbalists, Mama Fiina stunned many of her followers when she revealed that she became saved long ago and accepted Jesus Christ as her Lord and personal savior.

Mama Fiina went on narrate that she is a born-again Christian and that renown city pastors; Wilson Bugembe and Aloysious Bujingo are her favorite preachers.

She, however, took a jab at city worship centers stressing that the challenge with the churches in Uganda is that they only know how to receive rather than give back to the needy.

She added that it is also the same problem affecting the elected leaders reasoning that people put them in offices expecting to be served but they only end up fulfilling their selfish interests.

The problem with our churches their just here to receive rather than help the needy and communities and have just hinted about it in good faith and I think they should style up.

I got saved long ago. Pastor Bugembe and Aloysius Bujingo are my preachers.

Mama Fiina also noted that she spearheaded Evelyn Lagu’s kidney transplant car wash campaign not because of their friendship but due to her will to help people who are in need.