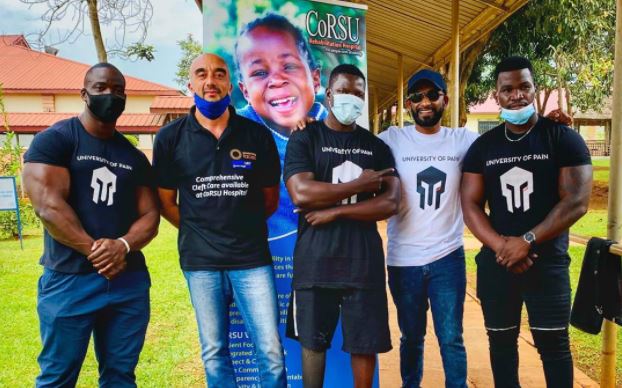 His leg may have been shattered, but his will and resolve remain unshaken. Bodybuilder Safalu Tamale who lost his right leg to a bodaboda accident early this year says he is still eyeing the coveted MR Uganda title despite the new handicap.

Safalu made the remarks while speaking to media after getting his prosthetic leg fitted at CoRSU Rehabilitation Centre, a specialized surgical hospital in Kisubi, Entebbe on Thursday.

“I am happy that I have gotten a new limb that can support me to train again. This limb can do everything that I need to in the gym like squats and lifting weights,” Safalu, who was in high spirits said.

“I am returning to compete again. I am very optimistic that I will give other body builders a run for their money.” He added.

According to Naluggya Jamaima, an orthopedic technologist at CoRSU who was in charge of fabricating his limb as well as his rehabilitation, Safalu has maintained a positive outlook on life and she is hopeful that he will fully recover and continue to carry out his duties.

“During his training, we tried doing squats and he managed it with his new limb. Safalu’s artificial limb is capable of doing heavy duty work including gym activities.” Naluggya Jamaima further revealed.

On February 28, 2020,  Safalu, who says is lucky to be alive, was involved in an accident when a boda-boda he was travelling on failed to break in time and was crashed between two commuter taxis. He came out with a double fractured leg.

Despite seeking treatment at several hospitals, the leg could not be saved and had to be amputated as it started getting cancerous.

With bills pilling up, Safalu reached out to colleagues and well-wishers for aid. Among those who heeded the call was University of Pain, a charity organization supporting local athletes who arranged for him to receive treatment at CoRSU rehabilitation hospital

“Safalu was a colleague at University of Pain. When we learned that he was seeking treatment and looking for financial aid, we came through to support him,” Akuha Milton, manager at University of Pain said. “This is not the end of our support. When he finally gets better, we will offer him employment as a gym instructor and also continue to support his endeavors as a bodybuilder.”

Safalu Tamale has previously competed in the Mr Uganda 2019 championship lightweight category where he emerged third.