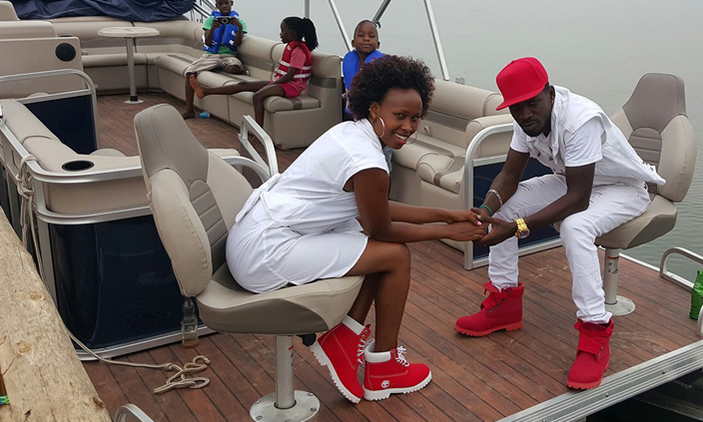 Hon. Ssentamu Kyagulanyi Robert, aka Bobi Wine, is many things rolled in one. He is an award winning artist and a firebrand politician who is shaking the status quo in Uganda.

Bobi is fast taking Uganda opposition leader Warren Kizza Besigye Kifefe place as the face of resistance against the country’s President Y.K Museveni rule. He has been hailed in Africa, the US and Europe for his steadfastness in pursuit for a just Uganda. He is set to run for presidency in 2021 under his National Unity Platform.

On 12th February, 1982, Bobi was born in Nkozi Hospital in Gomba District of Uganda. His late mother worked in the same hospital where he was born lived in Kamwokya slum, Kampala city. Bobi’s baptismal name is Robert Kyagulanyi and is a staunch Catholic faithful.

Upon exiting high school, the award winning artist joined Makerere University where he majored in drama, music and dance and eventually acquiring bachelors degree in Arts. Robert has since enrolled to further his education at Harvard Kennedy School of Government where he studies “Leadership in the 21st Century”

It was not until 1999 when Robert took a plunge in music industry during which time he adopted his current stage name-Bobi Wine. His first single debut; Sunda, Funtula and Akagoma, all featuring Ziggy D unveiled Bobi on East Africa music scene with considerable success. His musical lyrics intertwine reggae, Afro-beat and dance-hall styles that often carry messages touching on social conscience.

He led Fire Base Crew band that was later disbanded. Bobi went on to start a new band which he named Ghetto Republic of Uganja and with it, produced a record 70+ songs in a span of 15 years. In the year 2016, his debut “Kiwani” featured in the Disney’s Queen of Katwe movie soundtrack.

In 2010 Bobi starred in a local movie called Binayuganda and later in the same year was cast in Cleopatra’s drama movie “Yogera” In 2015 Bobi played a key role in the movie “Situka’ that was supported by Twaweza besides working on several other films such as “Divizionz.”

Seemingly, everything Bobi touches turns to Gold. Come 2017, the musician declared his interest to vie for parliamentary seat in Kyaddondo East Constituency. What touched many was his door-to-door style of campaign that saw him romp home with a huge win margin over his two opponents.

In 2018, Bobi’s popularity rose exponentially. Most of the candidates whom he campaigned against, including a number from the ruling party saw them vanquished into political limbo.

Most of Bobi’s lyrics advocate for the poor in the slums in Uganda. Many a times Bobi Wines supports projects that are geared towards improving the living standard of the poor. In 2012, Bobi led a mass campaign to promote garbage management, sanitation, and sensitizing people on hand washing as a way of preventing diseases. He has also donated funds to construct pit latrines and drainage system in Kisenyi II slum within the capital city, Kampala.

The ghetto president met the love of his life; Barbara Itungo when he was a student at Makerere University. They wedded in August 2011 and have since been blessed with four children. After being featured as a role model parent on Ghetto Resident Reality TV, Twaweza nominated Bobi as a parenting ambassador in 2013. He brings up his children in his home village; Magere where he keeps them off from the glare of the media.