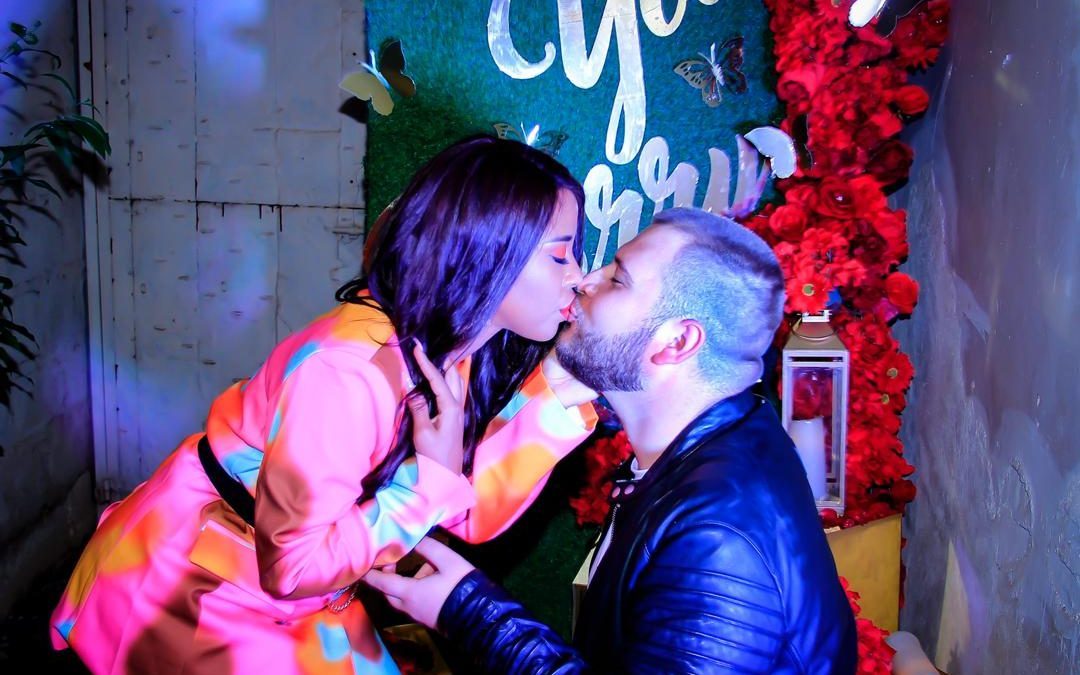 On Saturday night, Maxim Kizito Steurbaut, better known as MAXXI bowed down on one knee and told TV star Sheila SALTA: “I love you, Do you want to marry me?”

What did she say? Hold up let’s rewind and give you the full story, this is super cute!

8 years ago Sheila Salta was doing great with her TV show and events gigs. She was the perfect example of a star in the making when she met Maxim – a Ugandan raised white boy with a passion for entertainment and business then working for Dr. Jose Chameleone as Tour Manager and handling many business projects for the both of them.

Meeting for the first time at the hotel where Max was manager the two hit it off fast, liking the same things and looking cute together. After a few romantic dates, it was Sheila who told him she wants to get serious, and of-course maxim could not resist.

Fast forward, 8 years, Maxim has his own talent agency and several business investments and Salta a big star on NBS Katch Up, the couple is looking great and living the high end life. Sheila and Max are an OG couple here in Kampala, everybody knows them together, “they make a strong POWER COUPLE.” is what is often heard about them.

Sheila Salta was so emotional. It took her a second to catch her breath, with tears in her eyes, she looked at Max and said “YES, yes, I’ll marry you!”

Thinking she was at her belated birthday party as easily convinced by those around her, she actually walked into a night she’ll never forget.

“We have grown together, it was not easy but who ever said it would be, right now we are ready to focus on our future,” revealed Sheila Salta.

The couple has seen good and bad times, break ups and make ups, making money or being broke – they always had each other’s back. We have followed them from the beginning and we send our blessings to the newly engaged couple!

Am so ready to be with her for the rest of my life, she is my better half. Ones you can trust a women 110% because of all the mistakes in the past, you can marry her! I can’t give up on trust.

“Am overwhelmed! I was expecting this because we talked about it, but I can’t believe the day is finally here. I love him and him alone. Now he is mine officially, forever,” emphasized Salta.

Well, what about the WEDDING?

Maxxi says, “Well, 2020 is finished, it won’t happen this year, maybe next year! We both have families in Europe that will have to fly over and right now that’s a hustle. We are waiting for things to go back to normal. No rush.”

What are the plans for the future?

Maxxi plans to finish off 2020 in style, even stronger rhan it started. He revealed to this website that he wants to focus on spending more time with his family and kids and might open a sneaker shop.

Am going to take it slow, I’ve done my last deals for the year and am ready to focus more on my health and spent as much time with my family and kids. Might open a Sneaker Shop! I’m going to finish 2020 in style.

Likewise, Salta is comfortable at NBS TV and she has been getting the endorsements from different brands. She also revealed that she got an invitation to work as and emcee in South Africa.

She says, “Oh, am on a roll! I love my new job at NBS and am getting deal after deal. Am even being called for MC work in South Africa. I am happier and stronger then I’ve ever been, with enough energy to stay on the top. My family is my number one priority but my career is as much important to me!”

“I have just started, and can’t wait to see what the next few years brings for me, keep your eyes on me,” Salta adds.