For any father, not having access to your children is a gutting feeling. Geosteady opened up on how it feels not living with his kids following his split with wife Prima Kardashi.

Last week, we reported about Prima Kardashi’s allegations pinning local singer Geosteady of breaking into her house and vandalizing her property after they split.

The two lovers are said to have called it quits over infidelity and the singer seems to have come off worst. Recently, he left clues of it being a case of domestic violence with him as the victim.

On Wednesday, the Blackman Records CEO shared an emotional post on his Facebook page where he attached a photo of one of his daughters Soraya and revealed how he misses them.

Geosteady expressed how, through a phone call, he talked to Soraya and she asked him if he was ever return home. The singer said that he nearly shed tears.

Called my pride Sorayah Williams Kigozi on her maid number saying “Halo bby how u?” she said she was fine! Then asked her “how is Solange?” she said she’s so okay!! Then she asked me, “Dad are you coming home tonight to tomorrow morning?” trust me i nearly cried and just told her I’m coming soon coz I couldn’t tell her I DON’T KNOW! God Help Me Through Please If All This Goes Well!

It is not clear how far the former lovers have reached in terms of reconciliation. No resolution has been reached yet but Kardashi said that she won’t be revenging against the father of her children.

Nameless’ dad discharged after successful surgery on the head 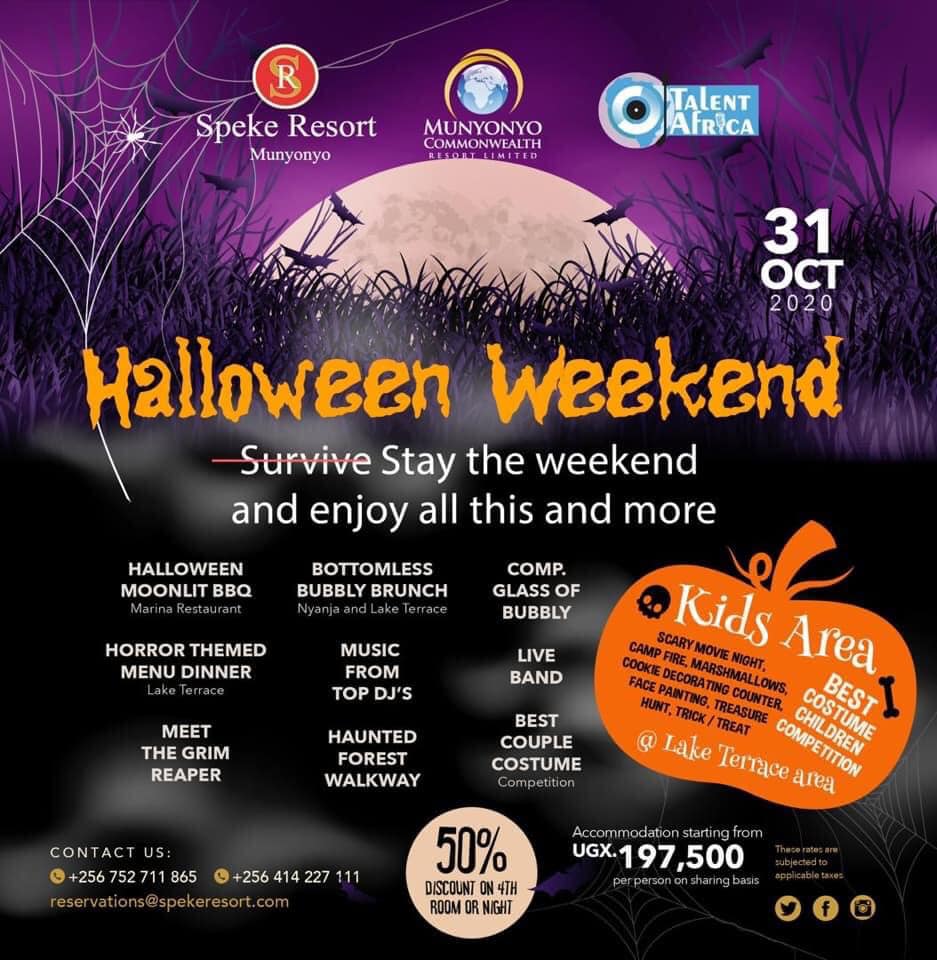 With the Covid-19 curfew, this year’s Halloween celebration will not be the same. The bars are closed and people are supposed to be home by 9pm. In comes Speke Resort Munyonyo with a Halloween weekend “staycation”.

There are lots of activities lined up, but before delving into them, there are Halloween weekend special rates on accommodation starting from only Shs197,500.  To make the 31st October party even more “creepier”, there is a 50% discount for a fourth person in a group or the fourth night that one pays for.

There is a Halloween Moonlit barbecue at Marina Restaurant, Bottomless Bubbly Brunch at Nyanja and Lake Terrace with complimentary glass of bubbly and the night will be capped with a Horror themed menu dinner at Lake Terrace.

Entertainment will include music from top DJs and a live band. You will also experience the haunted forest walkway and the couple with the best costume will win a prize.

The kids are also taken care of as there will be a scary movie night, camp fire, marshmallows, cookie decorating counter, face painting, a treasure hunt, plus tricks and treats. 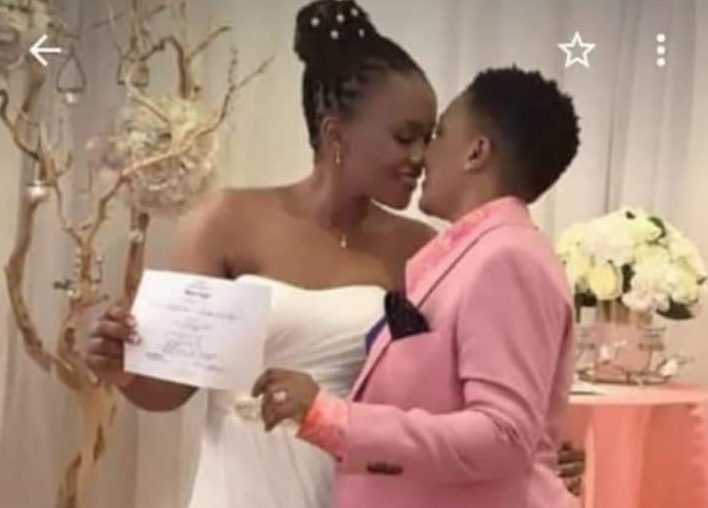 The photos which were exposed by popular city pastor Franklin Mondo Mugisha elicited mixed reactions from a number of her followers causing an uproar.

When pastor Mondo was asked why he released Julie Mutesasira’s photos, he responded saying he did so because he was under a lot of pressure from fellow pastors who were pinning him for strongly backing pastor Steven Mutesasira to marry another wife.

Due to the above-mentioned reason, pastor Mondo chose to silence them by revealing photos of how Julie Mutesasira dumped pastor Steven for a fellow woman three years ago.

He went ahead to explain that even before Julie left Uganda for Canada, him and other few pastors tried to intervene into their marriage so that they could settle the misunderstandings but in vain.

Pastor Mondo furthermore disclosed that Julie ditched Pastor Steven and told him how she had moved on. On top that, the most heart breaking issue was when she told pastor Steven that her sexual preferences had also changed and hence the reason why in the wedding photos Julie was acting as the groom.

He also noted that Julie Mutesasira used to sweet-talk fellow female pastors before she fled abroad. Pastor Mondo also revealed how the wedding took place in 2017.

I have more than one photo of Julie Mutesasira’s wedding with a fellow woman. I released those photos after I met over 16 pastors who were on my neck and grilling me for having backed Pastor Steven Mutesasira for marrying a second wife.

So when I exposed to them Julie’s photos marrying a fellow woman, all the pastors who had come here at my office all went mute and walked out of the meeting we were in.

At first, I had decided not to display those photos on social media because of family issues and for matters of privacy but due to a lot of pressure, It went out of my hand and I had calm down the fire that was being sent towards me.

In fact, I got the photos from the owners themselves, so they I got snaps, I talked to Pastor Steven about the issue. Before she even left, I used to get complaints from different fellow young girls at Church reporting to me how Julie was always hitting and sweet-talking them.

There is a pastor known as Kieth can also testify on that because there were some matters that we intervened and sorted out. 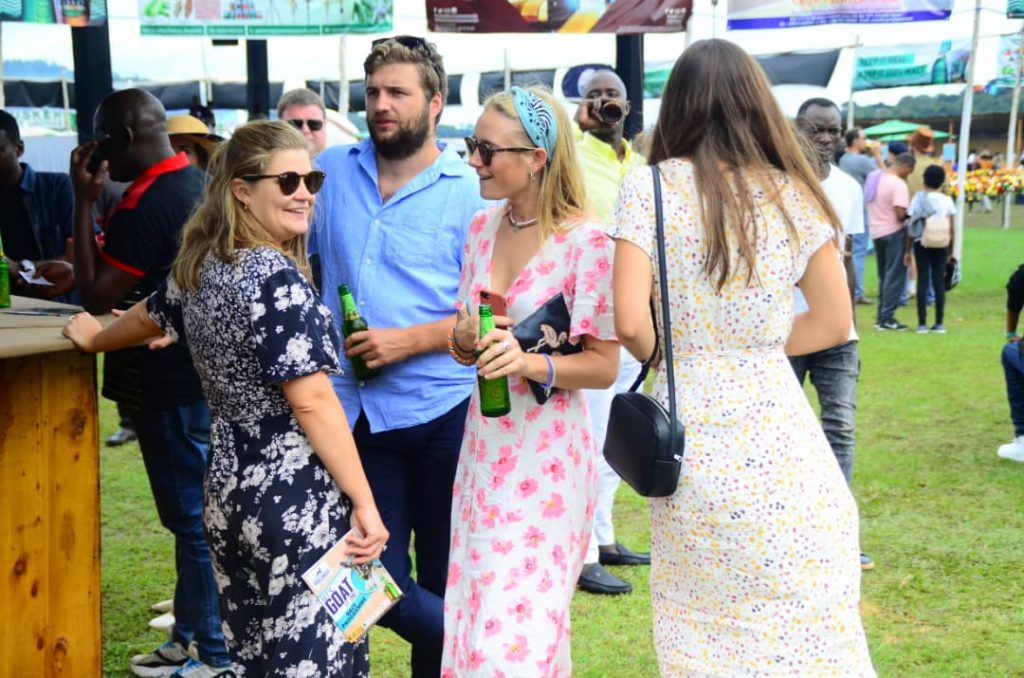 Uganda Breweries’ Tusker Lite Beer brand has been recently awarded recognition of the prestigious Gold Quality award with the Monde Selections Awards 2020. The awards are run by a International Institute for Quality Selections in Brussels, Belgium and they have been on for 59 years.

Tusker Lite has been recognized as a powerful beer that puts quality at the top of consumer expectations, which was fittingly evaluated by a panel of independent and renowned experts according to a very precise methodology and criteria.

“This award is such a great honor to receive and I must admit it is an ‘Absolitely gold’ moment for us. We are always humbled by the amazing support we get from our consumers all around the country and I can say without a doubt, we wouldn’t be speaking of such an achievement if it wasn’t for them,” said Phillipa Nantamu, Tusker Lite Brand Manager, UBL.

Monde selection is an annual non-competitive award open to food, drinks and cosmetic products and is the longest running and most recognized international institute that evaluates the quality of consumer goods of more than 3,000 products each year from all over the world.