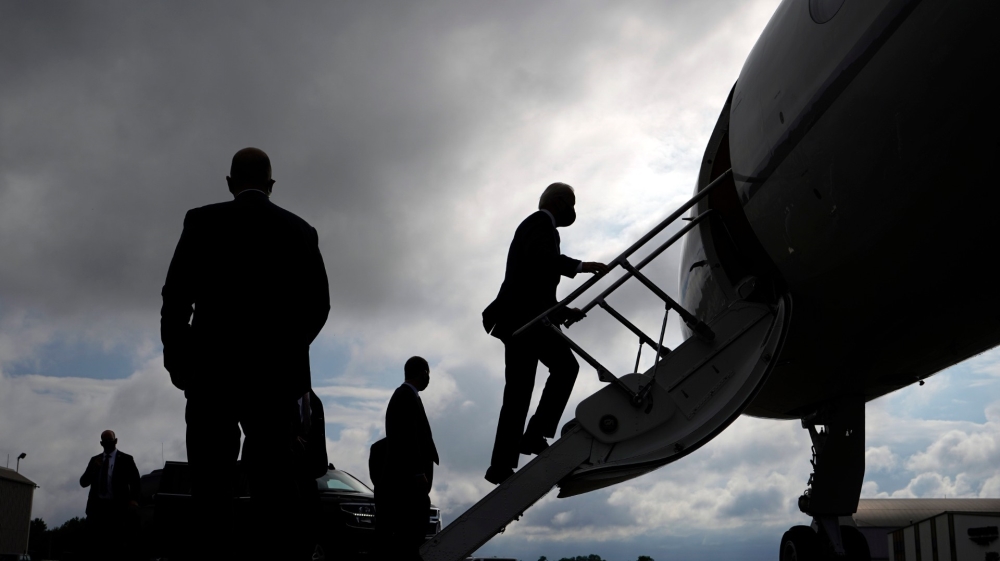 The Trump campaign will launch a new ad in North Carolina, Georgia, Florida, Minnesota, Wisconsin, and Michigan this week, touting the country’s recovery from the coronavirus.

The campaign has repeatedly sought to portray Trump, who has been resistant to lockdowns across the country throughout the pandemic, as the candidate best suited to lead the US economy out of the crisis.

The ad seizes on comments made by Biden in August, in which he said he would lockdown the country again if the spread of the coronavirus warranted it.

Senator Elizabeth Warren, who ran against Biden in the Democratic primary, has written in an op-ed in the Cosmopolitan magazine that the candidate will “stand up for working women”.

“America’s women are getting us through this crisis,” she wrote. “They deserve a break, a chance to get ahead, and an economy that works for them. Donald Trump doesn’t get that, but Joe and Kamala do.”

For Labor Day, I wrote in @Cosmopolitan about how women are getting us through this crisis. They deserve a break, a chance to get ahead, and an economy that works for them. Donald Trump doesn’t get that, but @JoeBiden and @KamalaHarris do. https://t.co/0Dk61QWTzR

President Donald Trump in recent weeks has sought to reframe the election away from his handling of the coronavirus, towards a “law and order” message.

However, on Monday, he appears set to address the economic comeback from the pandemic, tweeting “Jobs number, and the Economic comeback, are looking GREAT.”

Republicans have repeatedly focused on the country’s economic strength before the pandemic to portray Trump as the man to lead the recovery. Biden, meanwhile, has said Trump’s ineptitude in handling the crisis has made the situation worse.

The Biden campaign has sought to capitalise on the uproar about Trump’s reported disparagement of fallen military members by relaunching an advertisement this week in battleground states with large numbers of military personnel that highlighted his own record of support for the armed forces.

The advertisement, titled “Protect Our Troops”, portrays Biden as being from a military family and understanding the sacrifices service members make, according to the campaign. Biden’s son Beau was deployed to Iraq in 2008 as part of the Delaware Army National Guard.

The Atlantic magazine, citing four unnamed people, reported last week that Trump had referred to Marines buried in an American cemetery near Paris as “losers” and declined to visit their graves during a 2018 trip to France. Trump vehemently denied the report. The Associated Press, the Washington Post and Fox News confirmed parts of the report also with unnamed sources.

Biden will meet on Monday with the leader of the largest federation of US labour unions, AFL-CIO President Richard Trumka, at the group’s state headquarters in Harrisburg, Pennsylvania, and take questions from union workers.

The Harrisburg event highlights the Biden campaign’s strategy for Pennsylvania, where early voting starts in mid-September.

The former vice president needs his party’s base, including African Americans in places like majority-Black Harrisburg, to vote. His campaign also wants to convince enough working-class white voters in the state, many of them unionised, that Biden is a better option than Trump.

Hello and welcome to Al Jazeera’s continuing coverage of the US elections.