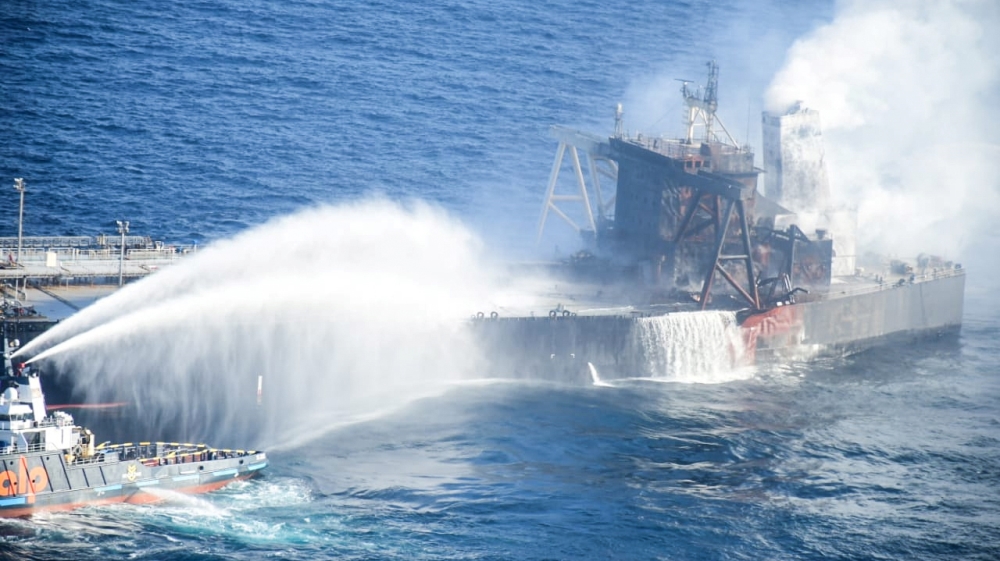 Sri Lanka’s navy says a large fire on a stricken oil tanker off its coast has been extinguished on Sunday, as international salvage experts began assessing the damage over fears of an environmental disaster if there is a leak.

The Panamanian-registered New Diamond, carrying more than 270,000 tonnes of crude and diesel, was en-route from Kuwait to the Indian port of Paradip when it issued a distress call on Thursday after an engine room explosion that killed a Filipino crew member.

Sri Lanka’s Navy Commander Nishantha Ulugetenna said the fire on the tanker, which the navy and the Indian coastguard got under control on Friday – had finally been put out.

“The fire has been completely doused,” the vice admiral told reporters in Colombo.

“The tanker’s (steel) plates are still very hot so there is a risk of reigniting new fires.”

The Indian coastguard tweeted that “no flame & smoke” was visible from the vessel.

Dutch firm Smit Salvage had commissioned the experts and was also sending two tug boats from Singapore and Mauritius, the navy added.

The Indian coastguard, which deployed six ships, an aircraft and a helicopter, added on Sunday that its pollution control vessel had arrived at the site in the Indian Ocean.

The rescue vessels are still dousing the tanker with water to prevent fresh fires being ignited in the hot steel plates near the burned engine room.

The tanker’s hull had cracked some 10 metres (33 feet) above the waterline as a result of intense heat from the fire, officials said.

Authorities said there has been no oil slick and the crack was not considered a catastrophic structural failure.

Sri Lanka’s Marine Environment Protection Agency said legal action could be taken against the owners, Liberian-registered Porto Emporios Shipping Inc, “should the worst happen and the ship breaks up”.

The vessel is larger than the Japanese bulk carrier MV Wakashio, which crashed into a reef in Mauritius in July, leaking more than 1,000 tonnes of oil into the island nation’s pristine waters.