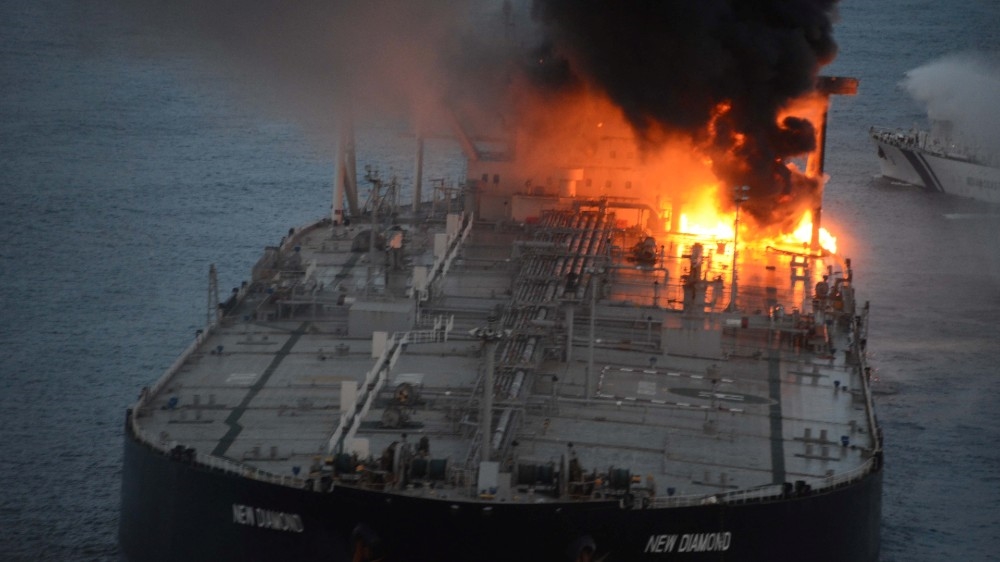 A fire-stricken oil tanker has been pushed away from Sri Lanka’s coast and into deeper waters on Saturday, rescuers said, after successfully containing the blaze during a 36-hour operation.

“The fire is under control but not out yet,” de Silva said. “We are keeping the ship in a location that is far enough from the shore in case there is an oil leak so that our shoreline does not get damaged.”

The fire broke out in the engine room of the Panama-registered New Diamond on Thursday morning, and it has spread to the bridge of the ship, which was carrying about two million barrels of oil.

A rescue and salvage effort that also involved the Indian and Russian navies brought the fire under control on Friday, before it could reach the vessel’s cargo area.

There was no immediate danger of the tanker breaking up despite a two-metre (6.6 feet) crack in the hull 10 metres above the water line, the navy said.

The New Diamond, carrying about 2 million barrels of oil, is seen after a fire broke out off east coast of Sri Lanka [Reuters]

The fire was triggered by an engine room explosion that killed a Filipino crewman on Thursday morning as the vessel was passing Sri Lanka on its way to the Indian port of Paradip.

De Silva said there were 23 crew on board. “There were five Greek and 18 Philippine nationals among the crew,” he said.

“One of them was injured and he was airlifted out of the ship and the rest were accounted for.”

Three tugboats – two Indian and one chartered by the owners – were brought into action on Friday night to push the vessel back into deeper waters amid fears of an environmental disaster should the oil leak.

A total of 16 vessels, including specialised firefighting tugs and four aircraft, were deployed to bring the blaze under control.

Sri Lanka’s Marine Environment Protection Authority said legal action could be taken against the owners, Liberian-registered Porto Emporios Shipping Inc “should the worst happen and the ship breaks up”.

Separately, Sri Lanka‘s meteorology department modelled the effect of 70,000 tonnes of crude oil – a quarter of the ship’s cargo – spilling into the ocean.

The simulation, a worst-case scenario according to authorities, found that such a spill would not immediately threaten the country’s east coast.

But Dharshani Lahandapura, chair of Sri Lanka‘s Marine Environment Protection Authority, told Reuters news agency that any spill from the ship would be catastrophic for marine life.

“It will be a huge environmental and economic disaster if this happens,” she said.

The vessel is larger than the Japanese bulk carrier MV Wakashio, which crashed into a reef in Mauritius in July leaking more than 1,000 tonnes of oil into the island nation’s pristine waters.

The Maldives, which neighbours Sri Lanka, has raised concerns that any oil spill from the New Diamond could cause serious environmental damage in the atoll of more than 1,000 coral islands that is heavily dependent on tourism and fishing.

Related Topics:AsiaEnvironmentSri Lanka
Up Next