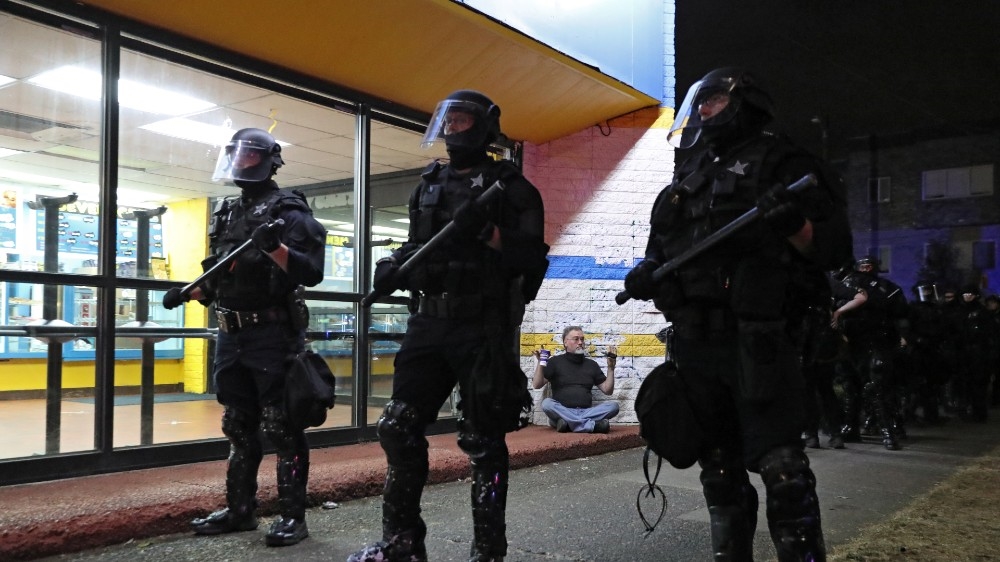 Police in Portland, United States have made multiple arrests overnight as the Oregon city nears 100 days of demonstrations against racism and police brutality.

A few hundred demonstrators met at the city’s Kenton Park on Friday before making their way to the Portland Police Association building, where police warned protesters to stay off the streets and private property.

“Yes, we have made multiple arrests tonight,” a Portland police spokesman told Reuters news agency in an emailed statement after police declared the gathering was “unlawful”.

“Officers will continue to make targeted arrests of those who fail to adhere to this order,” police said earlier on Twitter.

Demonstrations against racism and police brutality have swept the US since the death in May of George Floyd, a 46-year-old Black man who died after a Minneapolis police officer knelt on his neck for nearly nine minutes.

Portland, in particular, has seen more than three months of daily demonstrations calling for policing and social justice reforms.

These have at times turned into clashes between demonstrators and officers, as well as between right and left-wing groups.

On Thursday, police shot and killed a self-declared anti-fascist activist in Washington state as they moved in to arrest him on suspicion that he fatally shot a right-wing counterprotester last weekend in Portland.

The exact date of the 100-day milestone depends on how the protests are counted, but everyone agrees the benchmark falls over the Labor Day weekend.

Black Lives Matter protests, vigils and speeches marking the occasion are planned over three days, and Trump supporters are planning a caravan rally.

“Energy levels are pretty high. Tomorrow [Saturday] is the 100-day mark [after the death of George Floyd], so there are protests planned throughout the day,” he said.

The administration of US President Donald Trump deployed federal forces to Portland in July to crack down on the protests.

On Wednesday, Trump signed a memo that threatens to cut federal funding to “lawless” cities, including Portland.

His Democratic challenger in the November 3 presidential election, Joe Biden, has accused Trump of stoking violence with his rhetoric.

“The thing about the protests in Portland is most of the demands are to the mayor here. They want him to defund and abolish the local police,” Olmos told Al Jazeera.

“A lot of it is not centred on the president, but when President Trump [decides to] send federal agents here, it [is] definitely much more repressive.”