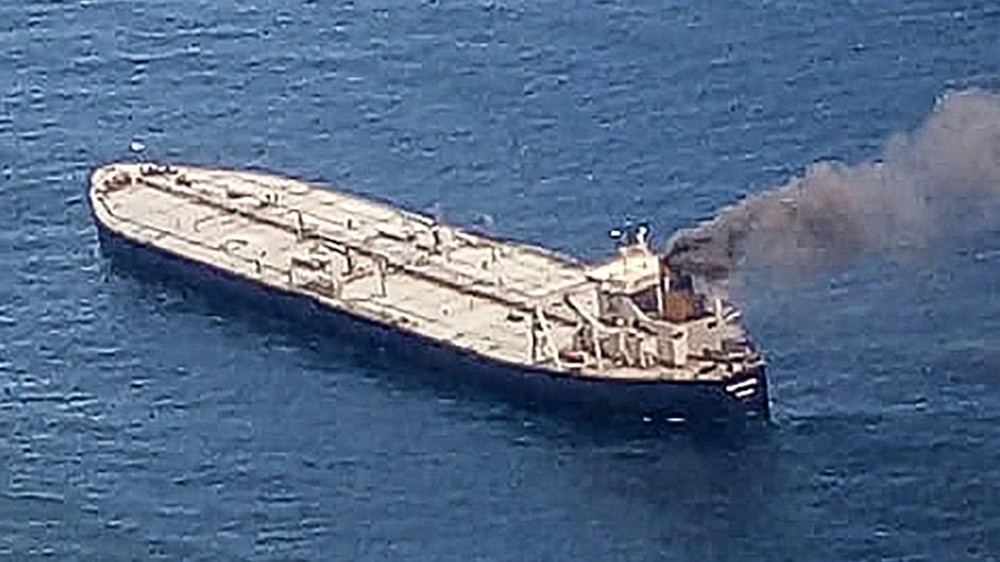 A new fire broke out on a supertanker carrying about two million barrels of oil in the Indian Ocean off Sri Lanka’s eastern coast as Russian and Indian warships joined the battle to put out the blaze.

The New Diamond, travelling from Kuwait to the Indian port of Paradip with a cargo of 270,000 tonnes of crude and 1,700 tonnes of diesel, issued a distress call on Thursday, navy spokesman Captain Indika de Silva said.

The vessel had a crew of 18 Filipinos and five Greeks. One crew member was missing, another was injured, and the rest were rescued from the Panama-flagged vessel, according to the navy.

“An Indian coastguard vessel and one of our ships are now in the process of dousing the flames that have spread to the deck of the tanker’s service area,” de Silva told AFP news agency.

There was no immediate danger of a leak from the stricken vessel, he added, which was 60km (38 miles) from the coastal town of Sangamankandi Point.

Three vessels from Indian cost guard including Indian aircraft and two Russian war ships which was berth at Hambantota Port left to help with recuse operations of New Diamond oil tanker has caught fire 38 Nautical Miles off the coast of Sri Lanka. pic.twitter.com/tfGr0kRuo5

Photographs taken by Sri Lanka’s air force showed extensive damage to the tanker’s funnel, and thick black smoke and flames coming from the bridge, which is just behind the cargo area.

Two Russian warships, which were at Sri Lanka’s southern port of Hambantota to take on food and water, were now headed to the New Diamond’s location to help with the rescue.

De Silva said rescuers were trying to prevent the fire from spreading to the cargo area and ensuring there was no leak.

Such a spill could cause an “environmental disaster” Ashok Sharma, managing director of shipbroker BRS Baxi in Singapore, told Reuters news agency.

Thursday’s incident happened just over a month after a state of “environmental emergency” was triggered by the spill of about 1,000 tonnes of fuel oil from a Japanese bulk carrier, MV Wakashio, when it ran aground on a reef in Mauritius.