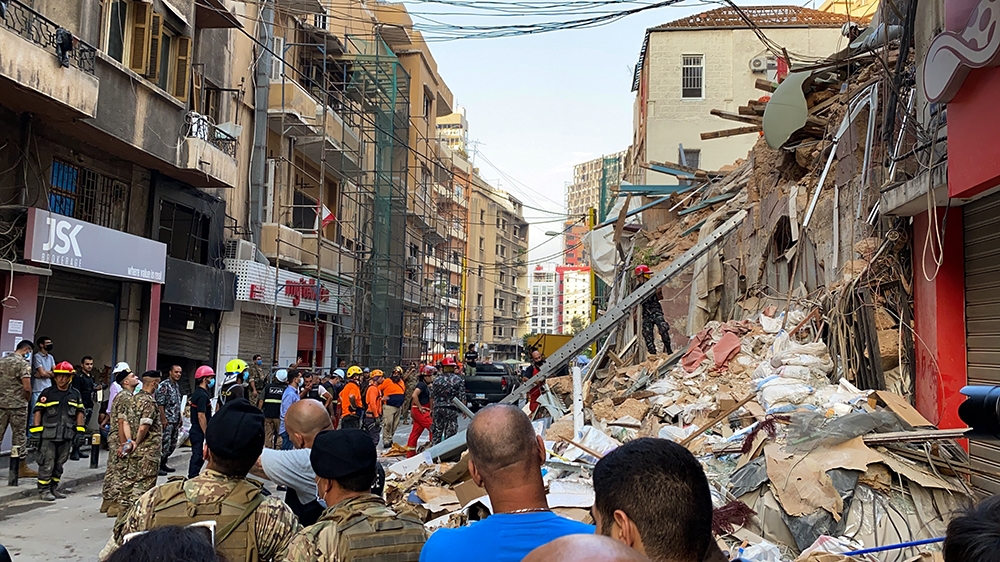 Beirut, Lebanon – A Chilean rescue team said it detected signs of life underneath the rubble of a building that collapsed in the massive explosion that tore through Beirut one month ago.

A member of the TOPOS CHILE rescue team told Al Jazeera that, using a scanning machine, it discovered signs of a pulse and breathing near the ground floor of the collapsed building.

He said it most likely belonged to a child, adding that the team also found the presence of at least one body.

The August 4 explosion, that killed 191 people and injured more than 6,000, destroyed much of Lebanon’s capital.

The Chilean team had been visiting streets in the capital as part of a mission to secure buildings before the reconstruction phase when one of their search dogs ran towards a building and alerted them of human presence, Akram Nehme, member of the Achrafieh 2020 NGO that helped bring TOPOS CHILE to Beirut, told Al Jazeera.

Edward Bitar, a member of NGO Live Love Lebanon working with TOPOS CHILE in Lebanon, said they had detected 18 breath cycles per minute emanating from under the rubble using the sensor.

“We are trying to keep hopes low. If someone is found, it would be a miracle,” said Bitar.

TOPOS CHILE often heads to disaster zones, including to Japan’s Fukushima region in 2011 when a nuclear reactor exploded.

In 2010, it helped rescue a man in Haiti after he spent 27 days in the rubble caused by an earthquake.

Bitar said the owner of the building had attested to the fact that no one was inside. But a number of people on the scene said they had alerted security forces of the smell of decomposition emanating from the building in the days after the blast, adding that security forces did not search the rubble.

Official search-and-rescue efforts have since been called off, leaving an army of civilians and volunteers to carry them out.

Thursday’s effort started in the morning and continued into the night. The team removed the rubble of the building with help from Lebanese climbers, firefighters and civil defence.

For many Lebanese, Thursday’s volunteer-led efforts are just the latest example of state failure, both in the lead-up to the explosion – caused by 2,750 tonnes of ammonium nitrate haphazardly stored at the Beirut port for almost seven years – and in the explosion’s aftermath.

On Thursday, a month after the explosion, Lebanon’s army announced it found 4.35 tonnes of ammonium nitrate near the entrance to Beirut port.

The military said army experts were called in for an inspection and found the dangerous chemical in four containers stored near the port.

“Honestly this is why we all walk around believing something else is gonna blow us up. Their incompetence is stunning,” Lebanese activist Bissan Fakih said in a tweet, referring to the country’s political class.

Woman dies after Kalaki police detain husband with her medicine