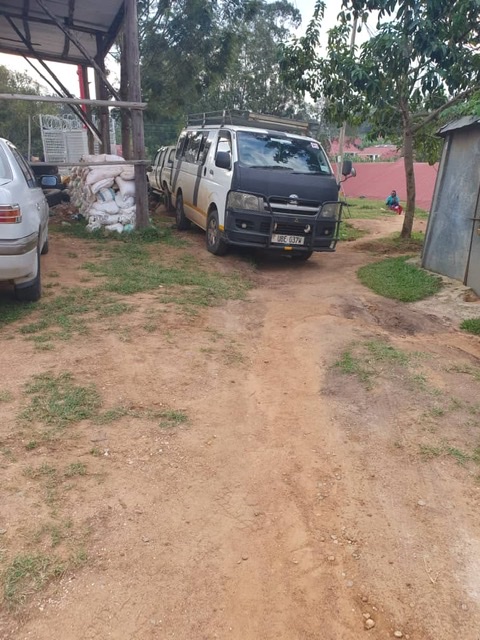 The men appeared restless in the township which was teeming with intense political campaigns ahead of this Friday’s NRM primaries.

Some of the men were endlessly talking on their cellphones.

Others spoke in hushed tones.

The hotel staff who had welcomed the visitors became suspicious of their intentions as they paced up and down.

They later chose to change to another hotel.

“I dispatched my crime intelligence team to monitor these people. They checked into a hotel in the wee hours,” Katwesime told ChimpReports on Thursday night.

“Of course some were not from Ntungamo. We also learnt that they changed the number plates of their car, raising more suspicion about their motives,” he added.

The car in which the men came was registered as UBE 037W but had its numberplate quickly changed to UBB 087W.

Using the black sellotape, the occupants of the vehicle changed number 3 on the number plate to 8 and letter E to B as shown in the pictures.

Realizing they had been smoked out, the men who are said to have been armed and wearing the black uniform associated with Counter Terrorism Police, decided to look for a way out.

Asked if the men were wielding weapons, Katwesime first hesitated before responding, “That was the initial information but we established they were not. We have not seen any arms.”

Nevertheless, the strange men were subsequently arrested today at around 3:00pm.

It’s understood some of the men are cops who were on leave but hired by Alex Kabarenga, Dan Rwiburingi and Kana Rwamutemba who are Naome Kabasharira’s chief campaigners.

Security is searching for Kabasharira’s agents to help in this investigation, according to informed officials.

Kabasharira is contesting against State Minister for Labor Mwesigwa Rukutana for Rushenyi County MP seat in the NRM primaries.

DPC Katwesime confirmed that six of the men, including the driver of the car, were already in custody but said he could not tell if some were cops.

“We are still engaging them,“ said Katwesime, adding, “But the presence of sticks in their car shows they were up to something bad.”

Knowledgeable sources said when asked what they were doing in the area, the men told police they were on a “special mission.”

Pressed to explain if they had reported to the area DPC on arrival as is the custom with such security deployments, the men were speechless.

On interrogation, the driver of the van said he was sent by Capt Martin from the Defence headquarters in Mbuya, Kampala.

Contacted, the Captain, who is the Officer in charge of Meterology at Mbuya, said he gave a letter to the civilian driver contracted by Defence to deliver to Gulu weather station but was surprised to hear he had been arrested in Ntungamo.

“Police called me saying they arrested the driver who was carrying armed policemen. I didn’t send him to Ntungamo. I want to know how he ended up there,” said Capt Martin.

“That vehicle, I think, is owned by a soldier. Defence sometimes uses these hired vehicles during special occasions. This driver went to Ntungamo on his own initiative.”

Capt Martin also confirmed that the driver of the vehicle was arrested and confessed that the car’s number plates were changed.

The driver said the plan was to cause violence at polling stations so that the election results are cancelled or the entire exercise suspended.

The hired men, who are now in detention, reportedly disagreed on sharing money from Kabasharira’s agents.

This caused bad blood with some opting to return to Kampala only to be arrested before leaving Ntungamo.

Earlier today, ChimpReports reported that First Lady Janet Museveni was in the area to resolve differences among NRM contestants for the party to realize peaceful elections tomorrow.