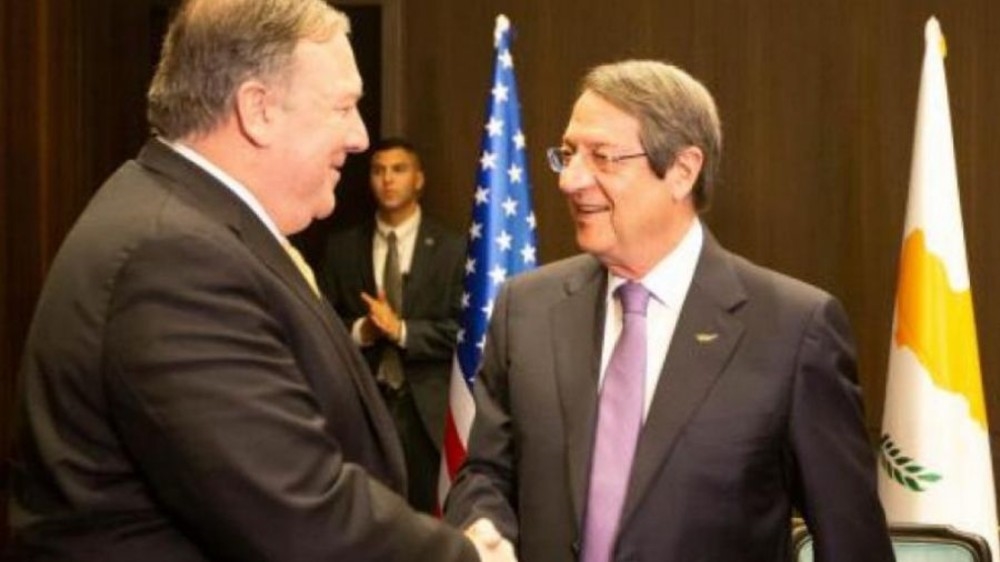 The United States has said it will lift for one year its decades-old arms embargo on Cyprus to allow “non-lethal” military goods to be sold to the Mediterranean island.

In a move which was immediately slammed by Turkey, US Secretary of State Mike Pompeo informed Republic of Cyprus President Nicos Anastasiades of the change in a phone call on Tuesday.

From October 1, the US will remove blocks for one year on the sale or transfer of “non-lethal defence articles and defence services”, the State Department said.

Pompeo also “reaffirmed US support for a comprehensive settlement to reunify the island”, according to State Department spokeswoman Morgan Ortagus.

For his part, Anastasiades welcomed the lifting of the embargo, which the US imposed in 1987 in the hope that it could encourage the reunification of the island.  He said the “positive” development “reinforce[d] the bilateral security relationship” between the two countries.

The US decision, however, drew immediate condemnation from Ankara.

“It poisons the peace and stability environment in the region,” the Turkish foreign ministry said, adding it does “not comply with the spirit of alliance” between the US and Turkey.

If Washington did not reverse course, the ministry said, “Turkey, as a guarantor country, will take the necessary decisive counter steps to guarantee the security of the Turkish Cypriot people, in line with its legal and historical responsibilities.”

Cyprus has effectively been divided since 1974 when Turkish forces invaded its northern third in response to an Athens-engineered Greek Cypriot coup seeking union with Greece. Repeated diplomatic efforts to solve one of the world’s most intractable conflicts have failed, often in acrimony.

The internationally recognised government of Cyprus controls the Greek Cypriot southern part of the island while Turkish Cypriots maintain a self-proclaimed independent state in the north, which is only recognised by Ankara. Greece, Turkey and Britain are guarantor powers of the island under a convoluted treaty which granted Cyprus independence from Britain in 1960.

The US announcement came amid a surge in tensions in the Eastern Mediterranean between Turkey and Greece over maritime borders and gas drilling rights, which also involves Athens-allied Cyprus.

Both Greece and Turkey have staged naval drills in the area to assert their sovereign claims. Meanwhile  the European Union – which counts Greece and Cyprus as members – warned Ankara on Friday to pull back or face sanctions.

Democratic Senator Bob Menendez said the decision recognised the importance of the US relationship with Cyprus, which he called “a reliable strategic partner for our nation”.

“It is in our national security interest to lift these outdated decades-long arms restrictions and deepen our security relationship with the Republic of Cyprus,” he said in a statement.

NATO allies Turkey and the US have been at odds over

Lawrence Korb, former assistant secretary of defence and a senior fellow at the Center for American Progress, said the announcement was just the latest hit to the ties between the two NATO allies.

“There is no doubt about the fact that Turkish-American relations are in very bad shape given the fact that the Turks have bought a Russian air defence system, which the US will compromise a lot of its capabilities in Turkey – in Incirlik [base] – and in Europe,” Kobb said, referring to Ankara’s purchase last year of the Russian S-400s, which Washington says are incompatible with the alliance’s defense systems.

“Obviously, the Turks are very upset about anything that empowers the majority of the people in Cyprus, the Greek Cypriots,” he added.

Related Topics:CyprusTurkeyUnited States
Up Next