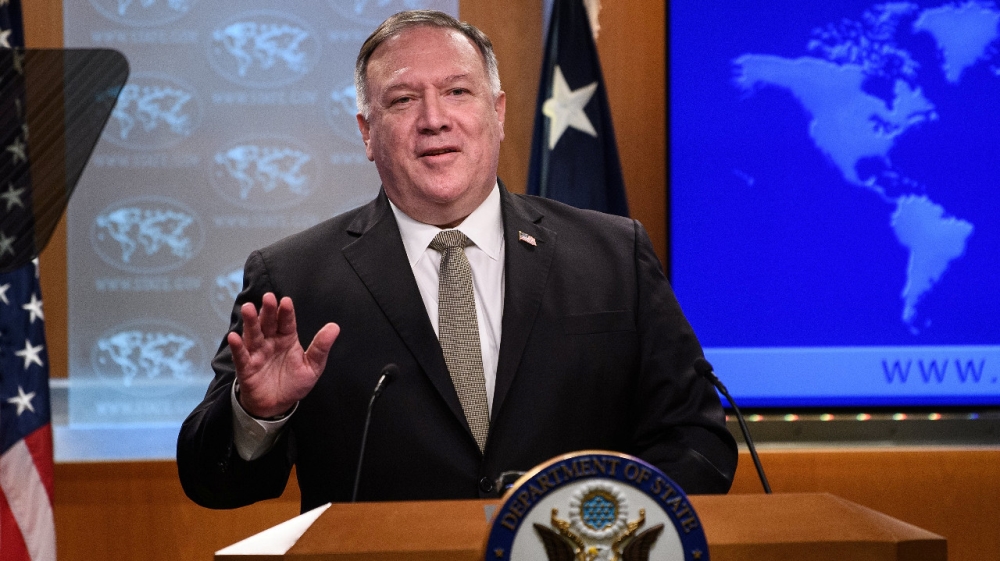 The United States has said it would now require senior Chinese diplomats to get State Department approval before visiting US university campuses and holding cultural events with more than 50 people outside mission grounds.

Washington cast the move as a response to what it said was Beijing’s restrictions on American diplomats based in China. It comes as part of a Trump administration campaign against alleged Chinese influence operations and espionage activity.

The State Department said it also would take action to help ensure all Chinese embassy and consular social media accounts were “properly identified”.

“We’re simply demanding reciprocity. Access for our diplomats in China should be reflective of the access that Chinese diplomats in the United States have, and today’s steps will move us substantially in that direction,” US Secretary of State Mike Pompeo told a news briefing on Wednesday.

It was the latest US step to restrict Chinese activity in the country in the run-up to the November presidential election, in which President Donald Trump has made a tough approach to China a key foreign policy platform.

Relations between the two countries continue to plummet amid numerous disputes over trade, Taiwan, Tibet, human rights, Hong Kong and the coronavirus pandemic.

Trump has blamed China for failing to adequately respond to the COVID-19 outbreak, which began in the Chinese city of Wuhan late last year.

The US has had the most deaths in the world and Trump’s Democratic rival, Joe Biden, has blamed Trump for the rapid spread of the virus in the US, which surged after Trump pushed for a lifting of restrictions. Trump, meanwhile, has accused Biden of being soft on China.

Despite Trump’s previous affinity for Chinese President Xi Jinping, his administration has since last year consistently ratcheted up restrictions and sanctions on Chinese officials, government agencies and companies, beginning with travel limits imposed on diplomats and registration requirements for Chinese media outlets.

In June, the US ordered China to close its consulate in Houston, Texas, which drew a reciprocal response from Beijing that forced the closure of the US consulate in Chengdu.

Pompeo on Wednesday also said Keith Krach, the State Department’s under-secretary for Economic Growth, had written recently to the governing boards of US universities alerting them to threats posed by the Chinese Communist Party.

“These threats can come in the form of illicit funding for research, intellectual property theft, intimidation of foreign students and opaque talent recruitment efforts,” Pompeo said.

On Tuesday, Pompeo said he was hopeful Chinese Confucius Institute cultural centres on US university campuses, which he accused of working to recruit “spies and collaborators”, would all be shut by the end of the year.

Last month, Pompeo labelled the centre that manages the dozens of Confucius Institutes in the US “an entity advancing Beijing’s global propaganda and malign influence” and required it to register as a foreign mission.

The State Department announced in June it would start treating four major Chinese media outlets as foreign embassies, calling them mouthpieces for Beijing.

It took the same step against five other Chinese outlets in February, and in March said it was slashing the number of journalists allowed to work at US offices of major Chinese media outlets to 100 from 160 due to Beijing’s “long-standing intimidation and harassment of journalists”.

Related Topics:ChinaUnited StatesUS & Canada
Up Next