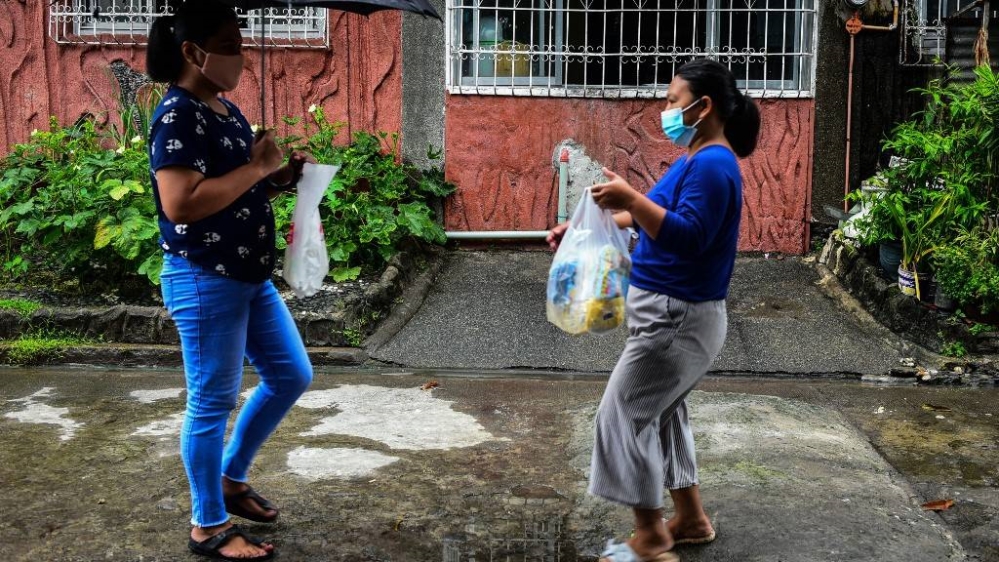 Struggling to make ends meet, Lorraine Imperio swapped a pair of Nike slip-on shoes for a whole dressed chicken on an online bartering site, one of dozens that have sprouted up during the Philippines’ virus lockdowns.

With millions stripped of their jobs and many forced to stay home to slow the coronavirus spread, Filipinos have flocked to Facebook groups to exchange their possessions, including kitchen appliances, children’s toys and designer handbags – mostly for food.

“It’s so difficult nowadays. You don’t know where you’ll get the money to settle the bills for groceries,” said Imperio, a mother of two whose husband works part-time at a doughnut shop in Manila.

His hours have been slashed because of the pandemic and he now only earns about 9,000 pesos ($185) a month, half of which is used to pay the rent for the family’s apartment.

Online bartering groups have provided a lifeline to the Imperios and other Filipinos hit hard by the country’s months-long virus restrictions that started in March and have plunged the economy into a deep recession.

At least 98 groups, some with tens of thousands of members, are operating across the archipelago, according to an AFP tally.

Nearly all of them started during the pandemic as many Filipinos resorted to the ancient trading practice to feed their families.

Google search volume in the Philippines for the keywords “barter food” soared 300 percent in May from April, iPrice Group found in a recent study, as lockdowns squeezed household budgets and made travelling about difficult.

Its analysis of 85 popular Facebook barter groups, with more than two million members in total, found food and other groceries were among the most sought-after items.

People post photos and specifications of the goods they want to swap, indicate what they want in return and then negotiate via the comments section.

After successfully bartering baby bottles that she no longer needed, Imperio swapped a baby’s down jacket and a Ralph Lauren hoodie for six kg (13 pounds) of rice.

Struggling to make ends meet, Lorraine Imperio swapped a pair of Nike slip-ons for a whole dressed chicken on an online bartering site, one of dozens that have appeared during the Philippines’ coronavirus lockdowns [Maria Tan/AFP]

While the Nike slip-on shoes were traded for a chicken, a second pair has not had any takers after three weeks.

“Old items are more difficult to sell,” the 28-year-old said. “With bartering, it’s easier to convert them into food.”

Jocelle Batapa Sigue launched Bacolod Barter Community four months ago out of frustration at not being able to go shopping and a desire to help others.

Her husband held the family’s only quarantine travel pass, which people were required to carry when they left their homes during the lockdown.

“It’s difficult for me to get what I want when I tell my husband to buy it,” said Sigue, who is a lawyer in the central city of Bacolod.

The group has more than 230,000 members with more joining every day, she said.

Sigue estimates thousands of items – from shampoo and birthday cakes to mobile phones and eyeliner – change hands on her site daily.

“Without the pandemic, I don’t think the barter community would be popular,” she said.

An estimated 5.2 million Filipino families experienced “hunger due to lack of food to eat” at least once in the previous three months – the highest in nearly six years, a survey in early July by pollster Social Weather Stations showed.

But it is not just cash-strapped people bartering their belongings.

Others are taking the chance to dispose of goods they no longer need after quarantine measures upended normal life.

Chona de Vega, 57, traded her hair-straighter and electric kettle for a bag of groceries and now plans to dispose of her iron.

“I have no use for it,” said de Vega, who lives in Manila and spends most of her time at home because of travel restrictions.

Charles Ramirez, who runs a 14,000-member bartering site in the capital, said a “big percentage” of his group live in poverty and mostly ask for groceries.

“People are realising that while they have no money, they have accumulated a lot of material things (they can swap),” said Ramirez, who set up his group in May after losing his job as a grocery wholesaler.

“It’s a depressing feeling, of course, having to let go of things you have accumulated just to be able to survive.”