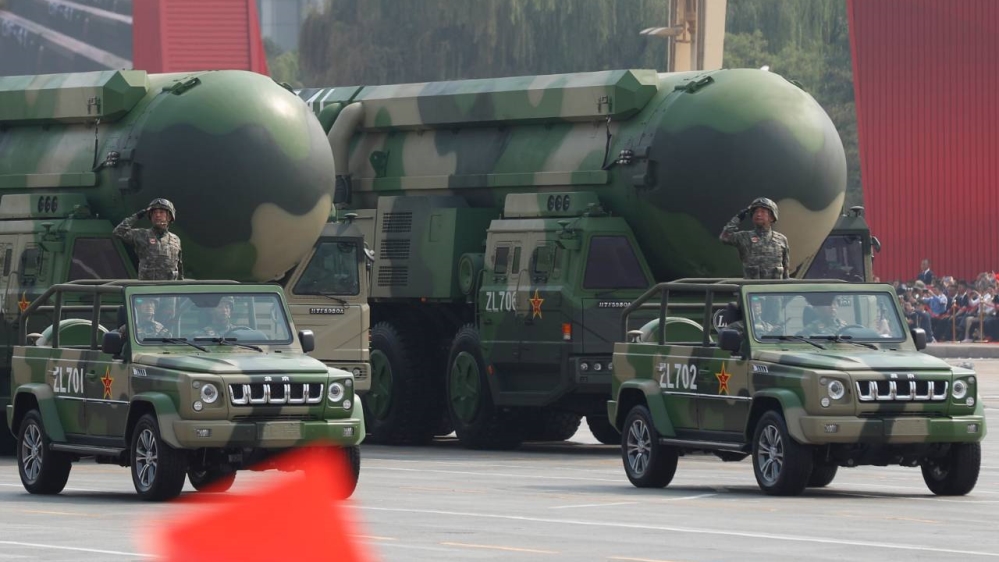 China is expected to at least double the number of its nuclear warheads over the next 10 years – from an estimated figure in the low 200s it has now – and is nearing the ability to launch nuclear attacks by land, air and sea, a capacity known as a triad, the Pentagon has revealed.

The annual report to Congress on China’s military marks the first time it has put a number to China’s nuclear warheads. The Federation of American Scientists has estimated that China has about 320.

The Pentagon said the growth projection was based on factors including Beijing having enough material to double its nuclear weapons stockpile without new fissile material production.

The annual report comes as the US Congress debates the pending $700bn defence authorisation bill amid rising tensions between the two countries.

She said US President Donald Trump’s Republican allies want some of the money to cover potential nuclear testing, which is opposed by the Democrats.

In his statement, Sbragia said China was also nearing completion of its nuclear triad capacity, as it develops an air-launched ballistic missile that would have nuclear capability.

The report said that in October 2019, China publicly revealed the H-6N bomber as its first nuclear-capable air-to-air refuelling bomber.

Washington has repeatedly expressed its desire to expand an Obama-era nuclear arms control treaty between the US and Russia to include China instead of simply extending the pact, known as New START, when it expires in February.

China has shown no interest in joining the negotiation.

In July, a senior Chinese diplomat said Beijing would “be happy” to participate in trilateral arms control negotiations, but only if the US was willing to reduce its nuclear arsenal to China’s level.

Earlier this year, the Communist Party-backed tabloid Global Times said Beijing needed to expand the number of its nuclear warheads to 1,000 in a relatively short time.

Trucks carrying weapons including a nuclear-armed missile designed to evade US defences were displayed in Beijing in 2019 as the country marked the 70th anniversary of the Communist Party taking power in China in 1949 [File: Mark Schiefelbein/AP]

In an interview with Al Jazeera on Wednesday, China analyst Andrew Leung said China’s nuclear posture was “largely defensive”, adding that even if China doubled its nuclear warheads, from 300 to 600, it would still be only a tiny fraction of the US arsenal.

“The US is said to possess something like 6,000 nuclear warheads, and the US has much more extensive military bases, with about 800 bases in more than 20 to 30 countries around the world. And so, even if China built some bases, it’s still way behind the US.”

Russia has roughly 4,300 warheads, according to the Federation of American Scientists.

Kingston Reif, director for disarmament and threat reduction policy at the Arms Control Association advocacy group, said China’s growing nuclear arsenal should not be used as an excuse for the US and Russia to not extend New START.

It “further reinforces the importance of extending New START and the folly of conditioning extension on China and China’s participation in arms control,” Reif added.

Tensions have been simmering between China and the US for months.

Washington has taken issue with China’s handling of the novel coronavirus outbreak and moves to curb freedoms in Hong Kong. The increasingly aggressive posture comes as President Donald Trump bids for re-election in November.

Another source of tension has been Taiwan. China has stepped up its military activity around the democratic island Beijing claims as sovereign Chinese territory, sending fighter jets and warships on exercises nearby.

The Pentagon report, based on 2019 information, said China’s military continued to “enhance its readiness” to prevent Taiwan’s independence and carry out an invasion if needed.