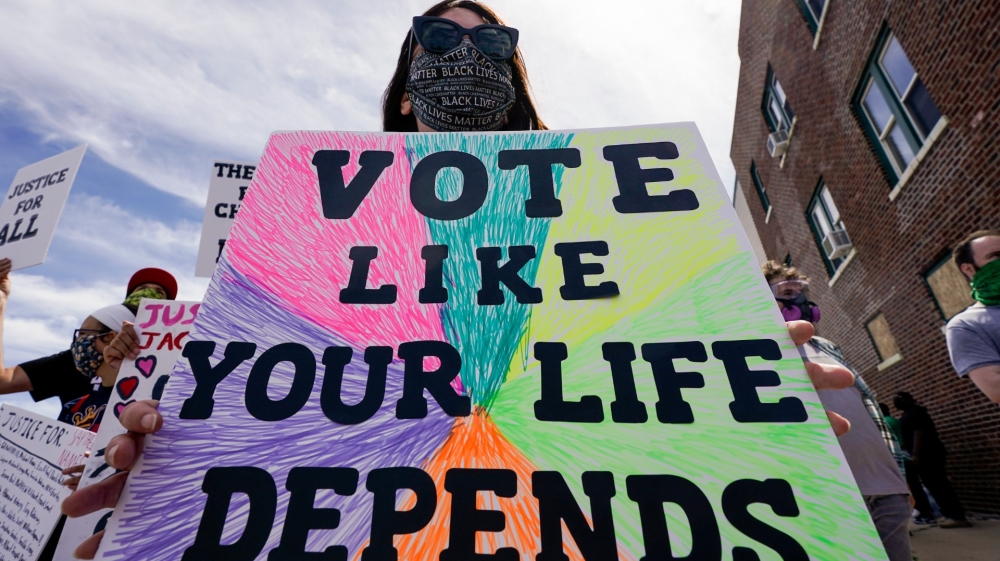 US President Donald Trump is set to plunge head-first into the latest hotspot in the country’s continuing racial justice unrest with a visit to Kenosha, Wisconsin, the city where Jacob Blake, a 29-year-old Black man, was paralysed after being shot in the back seven times by police.

Tuesday’s visit comes despite urging from local officials, including the state’s governor, that the president’s presence would further agitate the days of unrest that have followed the August 23 shootings and which, at times, have turned violent.

“I am concerned your presence will only hinder our healing,” wrote Governor Tony Evers in a letter to Trump earlier this week.

The president is set to meet with law enforcement and survey “property affected by recent riots”, according to the White House. Trump said on Monday he will not meet Blake’s family. He said he spoke to Blake’s mother’s pastor to set up a phone call with the family but demurred because “they wanted to have lawyers involved and I thought that was inappropriate”.

However, shortly before leaving Washington for Kenosha, Trump told reporters his team was still “making that determination” on a meeting with the family.

The Blake family instead plans to hold a counter-event during Trump’s visit, according to the US media.

On Monday, when asked about concerns his visit could make matters worse, Trump responded: “Well it could also increase enthusiasm, and increase love for our country.”

The controversial visit fits into Trump’s larger message that Democratic opponent Joe Biden has sided with “anarchists” and “rioters” amid the unrest. The president, in recent weeks, has increasingly sought to focus attention on what he calls the threat to American cities and suburbs, and away from the coronavirus pandemic.

Trump’s visit also comes a week after two protesters were shot and killed during the demonstrations in Kenosha.

Kyle Rittenhouse, a 17-year-old from Illinois who had come to the demonstration armed with a semi-automatic weapon, was later arrested and charged for the killings, as well as for non-fatally shooting a third man.

The family of Jacob Blake and organizers of Saturday’s Justice for Jacob Rally are hosting a community gathering at the site of Jacob’s shooting.

The gathering began with free music 🎶 from missionaries from Downtown, LA. #Kenosha pic.twitter.com/Iuaj8I3pSw

Trump on Monday appeared to defend the teenager – who had said in a widely circulated mobile phone video footage, recorded before the killings, he had come to Kenosha to protect properties.

Police say Rittenhouse fatally shot one man during a confrontation and the teenager fell while being chased by people trying to disarm him. That’s when he allegedly shot and killed a second man.

“That was an interesting situation,” Trump told reporters. “He was trying to get away from them, I guess, it looks like, and he fell. And then they very violently attacked him … He was in very big trouble. He would have been – he probably would’ve been killed.”

Biden, who on Monday returned to the campaign trail for the first time since the Democratic convention, accused Trump of fomenting the violence for political gain.

He swiftly rebuked Trump’s defence of Rittenhouse in a statement late on Monday.

“Tonight, the president declined to rebuke violence,” said Biden. “He wouldn’t even repudiate one of his supporters who is charged with murder because of his attacks on others. He is too weak, too scared of the hatred he has stirred to put an end to it.”

The battleground state was key to Trump’s slim 2016 Electoral College victory. While Biden remains up in national polls, his lead has been narrowing as national attention has moved away from the coronavirus and towards the unrest.

However, Biden continues to lead Trump in Wisconsin polling averages, according to RealClearPolitics.

Trump has sought to take credit for the deployment of National Guard forced to Kenosha, although the reinforcements were requested by the state’s governor. Trump also said he increased other federal forces in the area.

On Monday, Trump said he was heading to the state “to see the people that did such a good job for me”, later telling Fox News: “I am a tremendous fan of law enforcement and I want to thank law enforcement.”