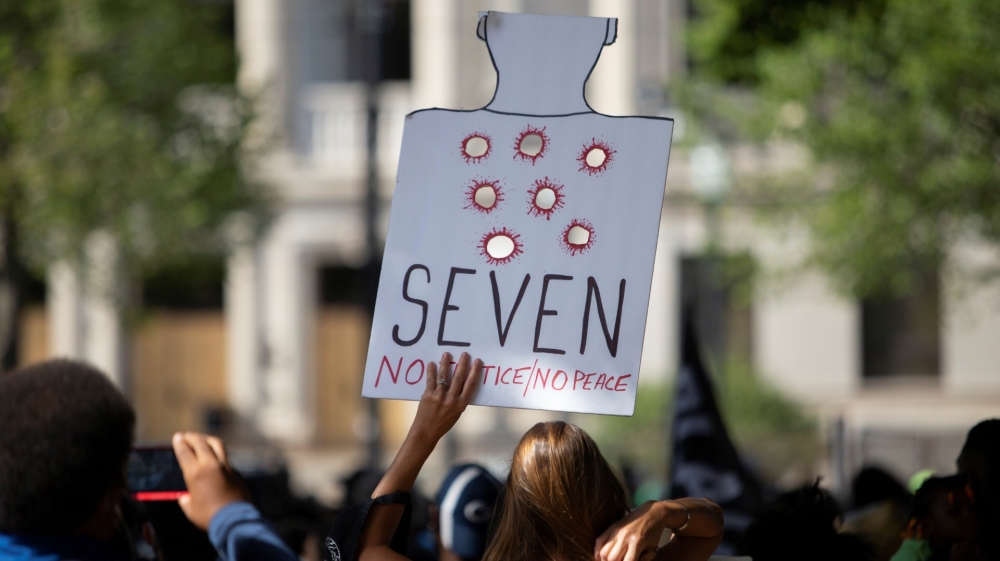 United States President Donald Trump does not have any imminent plans to condemn a 17-year-old who killed two people during a protest in the wake of the police shooting of Jacob Blake in Kenosha, Wisconsin, a White House spokeswoman has said.

Kyle Rittenhouse fatally shot two men, Anthony Huber, 26, and Joseph Rosenbaum, 36, and wounded a third, after attending the demonstration armed with a semiautomatic rifle last Tuesday. Rittenhouse had said he had come to the city to protect businesses from protesters, according to widely circulated mobile phone footage.

When asked on Monday if Trump would condemn Rittenhouse, White House spokeswoman Kayleigh McEnany said: “The president is not going to again weigh in on that.”

“You can ask him this evening. He may weigh in further. But at the moment, he’s not weighing into that,” she added.

The statement comes after Trump, on Saturday, dodged a reporter’s question about Rittenhouse, saying the incident was still under investigation.

“We’re looking at it very, very carefully,” the president said.

There have been nightly protests in Kenosha since Blake was shot in the back by police seven times on August 23, leaving him paralysed.

Authorities have maintained he was reaching for a knife when police opened fire in front of Blake’s three children.

McEnany’s statement comes as Trump has increasingly seized on the country-wide demonstrations, which at times have devolved into violence, in the weeks following the death of George Floyd after a police officer kneeled on his neck on May 25 for nearly nine minutes.

On Sunday, Democratic candidate Joe Biden challenged Trump to “condemn violence of every kind by anyone, whether on the left or the right”.

Trump is set to visit Kenosha, where the US National Guard has been deployed, on Tuesday, despite warnings from the state’s governor that the trip would only further agitate the situation.

When asked if Trump would be meeting with the Blake family, McEnany responded: “Currently, the plans are to meet with local law enforcement and some business owners and he’ll survey the damage.”

She added: “But there will be more detailed plans forthcoming that are announced.”