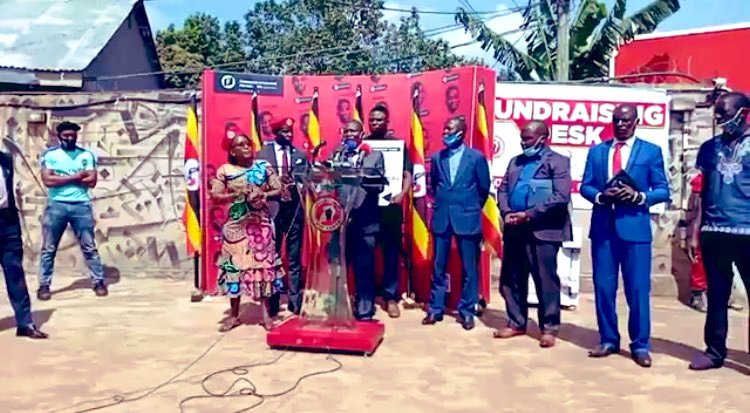 Led by Pastor David Ojambo of Bulega Baptist Church from Buikwe, the pastors said that Jesus is the one who influenced their coming to NUP.
“We are not here because of the powers of politicians but it is Jesus who sent us here,” Pastor Ojambo said.

“We are simply doing the right job. We are seeing injustices, abuse of human rights and we shall not be tired for speaking for those who can’t speak for themselves,” he added.

Ojambo noted that it’s the obligation of religious leaders to take part in the national issues not just sitting back and doing nothing.

The pastors vowed to commit on three issues.

“We commit to come out and advocate for the rights of the oppressed, petition God on all atrocities being committed to the people and he pays them because the Bible says whatever you sow, you will reap. Lastly, we commit to pray for Kyagulanyi so that God gives him wisdom and save him from pressure and atrocities of the junta,” he noted.

He noted that they are aware of all the attacks that are likely to be inflicted on them but they thought about all those and they are ready.

While welcoming the new entrants, Joel Ssenyonyi, the party spokesman urged them to stick to the cause.

“Some people come here to raise their bargaining powers and after that, they go to Museveni and ask for money and small things. I ask you to desist from that and know that we are fighting for a national cause not those small things,” Senyonyi said.

“We want to take over the country. As a leader, if you don’t have what to say just keep quiet.
Museveni should just tell us that he is no longer capable of ruling the country so that we, the young generation, can take over. We shall take care of him,” Ssenyonyi said.

David Louis Rubongoya, the party Secretary General said that the party legal council will file 18 cases across all the Courts of Law in Uganda, East Africa and other Courts in the world against the government and individual security personals on these cases.

Rubongoya said that the party has empowered the Elections Management Committee led by Aisha Walukamba to take over the elections process.

“Where we have two candidates demanding for one card, we shall carry out a vetting process and we shall also send people on ground to see who has more support and they will also appear before the committee. Lastly, no corruption attempt will be tolerated,” he said.

Walukamba, the chairperson of the NUP electoral committee, said that the candidates shall undergo the following criteria.

Ssenyonyi said that the party is not looking for rich people but people who are capable of leading.