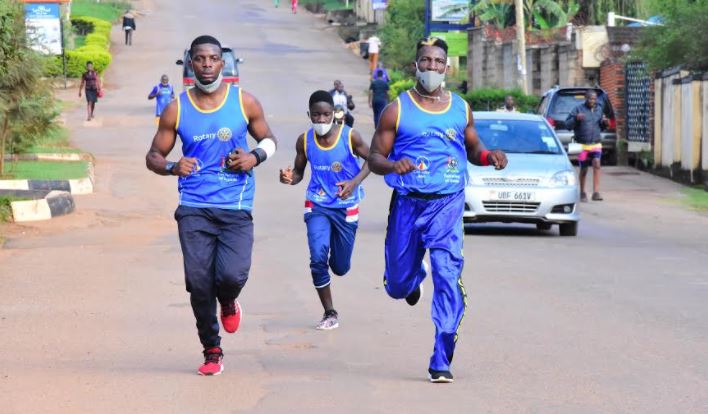 The Speaker of Parliament, Rt Hon Rebecca Kadaga has commended the Rotarians for their efforts in fighting cancer. The parliamentary speaker was speaking during the annual Rotary Cancer Run which was held virtually this year due to COVID-19 social distancing guidelines.

“The Rotary Cancer Run is one of those initiatives that very effectively demonstrate what can be achieved when the Public and the Private sector get together to address the challenges we have in our country,” she said.

“Cancer is not selective. Every man, woman and child has a risk factor, a risk we have to manage through our lifestyle choices and through the opportunity to test early. We are told that there are over 30,000 patients in Uganda that need need cancer treatment and care and thousands more we may not know about,” Hon Kadaga added.

The event, which was kick started by aerobics in the morning, had the participants run from the comfort of their homes and communities while watching the proceedings on the Uganda Rotary Cancer program website, the Rotary Cancer Run and Centenary Bank online pages. It was also telecast live on BBS Terefayina.

Speaking during a post-run virtual participant engagement in Muyenga, the Past District Governor Stephen Mwanje expressed Rotary’s gratitude for the awe-inspiring support from Ugandans and people from all over the world over for running virtually.

He said that, “Unlike other years, this year has seen us get overwhelming support from not only Uganda, but world over. We have recorded much more support from the diaspora compared to last year, attracting some of the world’s greatest commendations for this Virtual Rotary Cancer Run 2020.”

This year’s Rotary Cancer Run attracted global endorsements from renowned athletes like Tyson Gay, Bryan Habana, and Yohan Blake whose messages emphasized the importance of exercising, staying fit and eating healthy in the fight against cancer. Among other endorsements were those from people in Canada, Egypt, Djibouti, Kenya, and Ethiopia.

“The collections being made this year are directed towards the construction of two bunkers at Nsambya Hospital that will be housing the 2 cancer testing and treatment machines we hope to import in the near future,” Mwanje emphasized, adding that, “Given the impact of Cancer on our countrymen and the region, the bigger picture for Rotary is that, upon completion of the setup of the cancer testing and treatment center in Kampala, we will then move to four upcountry locations where we will setup 4 other state of the art Centers.”

In his remarks at the post-run engagement, Fabian Kasi, the Managing Director Centenary Bank said that, “Centenary Bank has been part of the Rotary Cancer Run for nine years, contributing close to Ushs700m in the period. In spite of the limiting circumstances, as a bank, we have contributed Ushs, 100 million this year, on top of availing digital channels through which contributions were remitted this time around.”

Kasi added that, “In as much as this year’s run has come to an end, you are encouraged to continue in the spirit of contributing and offering support to the construction of the bunkers. We must acknowledge that the fight against cancer is not over, and very many people still require our help to fight this disease. I therefore appeal to everyone here not to grow weary in this fight against cancer, but to keep hope and soldier on. Let us encourage all our friends, colleagues and families to keep participating and contributing toward this good cause.”

The trends also observed at the Uganda Cancer Institute indicate that almost 80 per cent of patients present the disease in advanced stages, hence limited interventions to prolong survival, an indication that the level of knowledge in the public and their perception of cancer, its symptoms, where to access treatment, and the care by the general practitioners is still low.

Since its initiation, the Rotary Cancer Run has attracted over 50,000 participants annually from Uganda, and the diaspora who have supported either through direct donations, charity drives, or by attending the run to raise funds to set up facilities for Cancer treatment in Uganda. In total, over Ushs. 2.5 billion net has been raised and many other forms of support in kind rendered to facilitate the fight against cancer in Uganda.