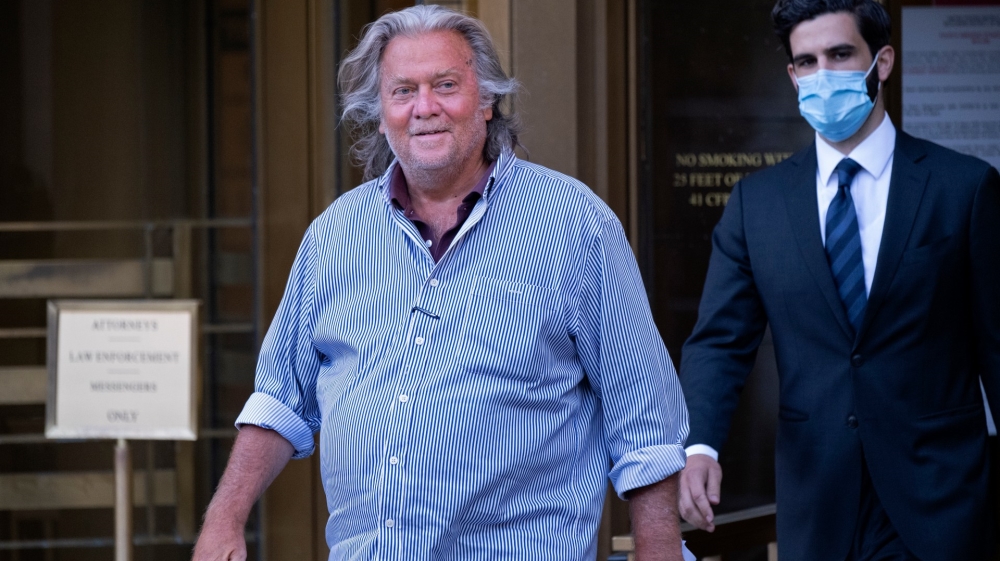 A May 2021 trial date was set Monday for Steve Bannon, President Donald Trump’s former chief strategist, on charges that he cheated donors to a group seeking to fund a southern border wall.

Bannon, 66, of Washington, DC, was audible but not visible on a video screen as he appeared for the first time before US District Judge Analisa Torres, who set a May 24 trial date.

The hearing was notable, too, as a prosecutor said one of Bannon’s codefendants had made inflammatory claims on social media asserting the prosecution was politically motivated and an assault on the freedom of donors.

In an indictment along with three others, Bannon was charged two weeks ago with unlawfully raising more than $25m for the “We Build The Wall” campaign.

Prosecutors said thousands of investors were duped into thinking all of their donations would go towards the project, even though Bannon diverted more than a million dollars, paying salary to one campaign official and personal expenses for himself.

Bannon pleaded not guilty after his August 20 arrest on board a luxury yacht off the coast of Connecticut. He was freed on $5m bail by a Manhattan magistrate judge.

As he left the courthouse, he shouted: “This entire fiasco is to stop people who want to build the wall.”

Also appearing Monday only by audio on a video screen were Bannon’s codefendants, including Brian Kolfage, the project founder and an Air Force veteran who lost both legs and a hand in a mortar attack in Iraq.

Kolfage, 38, of Miramar Beach, Florida, spent some of the more than $350,000 he received on home renovations, payments towards a boat, a luxury 4X4, a golf cart, jewellery, cosmetic surgery, personal tax payments and credit card debt, the indictment said.

Assistant US Attorney Alison Moe complained Monday that Kolfage has made comments on social media that violated local rules governing the behaviour of parties to legal cases in New York federal court and threatened to taint the potential jury pool.

In a letter to the judge, prosecutors cited “a steady stream” of “highly inflammatory” public statements Kolfage has made, including claims that the prosecution was an assault on the freedom of donors for “political reasons.”

“I gave 3 limbs defending this freedom, and I’d proudly give another to fight back at this injustice to preserve the future of this nation,” Kolfage wrote in one Facebook post.

“The witch hunt is on!” he protested in another.

Kolfage’s lawyer, Harvey Steinberg, said prosecutors were the real violators of local rules because of statements law enforcement authorities made the day of the arrests. He said prosecutors were acting like a schoolyard bully who hits somebody and then “runs to the teacher” when struck back.

The judge warned all parties to obey local rules banning statements that could interfere with a fair trial or prejudice the case.

Also charged were Andrew Badolato, 56, of Sarasota, Florida, and Timothy Shea, 49, of Castle Rock, Colorado. Kolfage, Badolato and Shea entered not guilty pleas Monday. They will be tried alongside Bannon in May.

NEW: Prosecutors alert the judge that We Build the Wall leader Brian Kolfage called his charges “political,” “an assault on every WBTW donors’ freedom,” a “witch hunt,” and a bid for “political prisoners.”