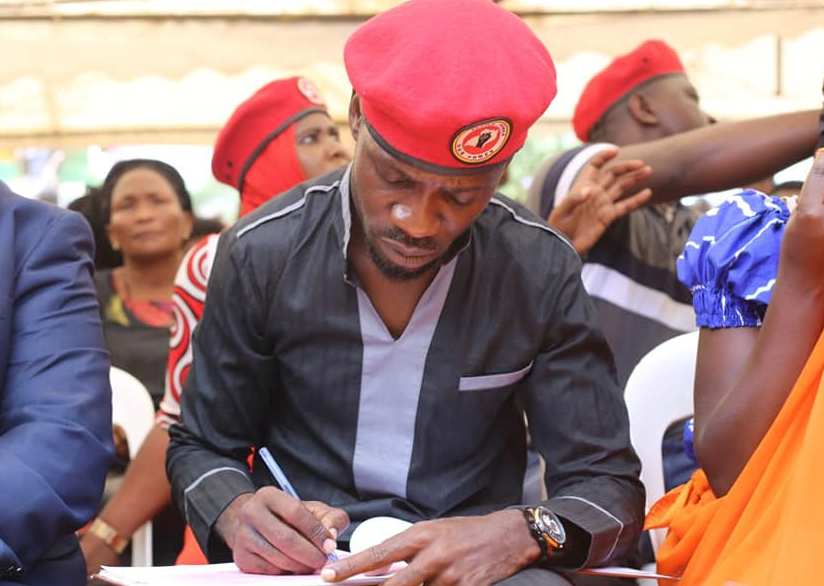 Presidential hopeful Robert Kyagulanyi (Bobi Wine) has come out set the record straight on the mismatches that have been cited in his academic credentials.

Bobi Wine has recently been accused of changing his age as well as his names, ostensibly to fit his political ambitions.

The claims were raised by self-styled city lawyer Hassan Male Mabirizi, who went as far as making a formal request from the Electoral Commission for Bobi Wine’s academic papers.

Mabirizi pointed out that while the academic papers showed that Bobi Wine was 40 years old, his candidacy papers showed he was only 38.

As such the lawyer vowed to drag the Kyadondo East MP to court to “ensure that he doesn’t appear on the presidential ballot” next year, because of his dishonesty.

However, while addressing press today, Bobi Wine clarified that his age was altered during his primary school to allow him sit PLE exams prematurely.

Having been through six different primary schools, Bobi Wine says in 1992 his father owing to financial constraints, approached the Head teacher of Kanoni Primary School to allow his son who was in P6, to register for the PLE of that year.

“My father was advised that in order for my age to match that of other candidates including my brother Walakira, we needed to increase my age by two years and that is when my year of birth was altered.”

“I would later continue with this anomaly in my age throughout my education at S4, S6 and university.”

“It was at the point of getting my first passport in 2000 that I decided to correct this anomaly to reflect the real date of birth. I remember swearing an affidavit to reflect this change which is normally what is required.”

To those saying he cut his age by two years, the MP said he could not have been born in February 1980, just three months after his elder brother Julius Walakira.

Regarding the assertion by Lawyer Mabirizi that he changed his names from Ssetamu to Sentamu, Bobi Wine says he also rectified this back in 2017 by swearing a statutory declaration, on which basis he was nominated to run for parliament.

During his lengthy and impassioned address, Bobi Wine blamed his woes on President Museveni, who he said had deployed the same tricks against his other challengers including Col Dr Kizza Besigye.

“Even though he had been Museveni’s qualified personal doctor in the bush, they claimed he had used another person’s marks to join Kitante Primary School in 1969,” Bobi Wine said.

“When fighting an enemy, Museveni deploys any tool available to him. He even mobilized people from Besigye’s village to claim that he had used another person’s papers. His intention is always not that these moves will succeed but to distract his challengers and keep them busy in courts of law and to embarrass them

Meanwhile, Bobi Wine also release names of people whom he claims approached him in 2017 to bribe him into joining the NRM.

These people he said, “reached out to me in a space of one week just after I won the Kyadondo East elections to give me part of the stolen billions in order to silence me. It was after I had made it clear that I was never going to be compromised by them that the changed tactics.”

Who are the Kurds? | Start Here | Kurds