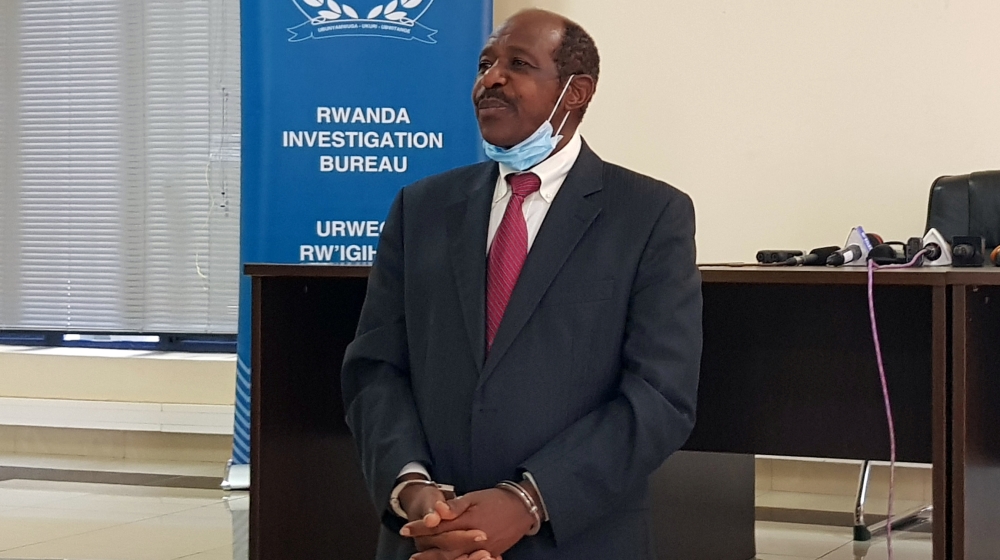 Paul Rusesabagina – known for saving more than 1,000 people in the hotel he managed during the 1994 Rwandan genocide, a story later told into the Hollywood film Hotel Rwanda – has been arrested on terror charges.

The Rwanda Investigation Bureau (RIB) said in a statement on Monday the 66-year-old government critic had been arrested abroad in an unnamed location on an international warrant and taken to the country to face charges “of serious crime including terrorism, arson, kidnap and murder”.

The announcement came as officers brought Rusesabagina – in handcuffs and a face mask – to the RIB’s headquarters in the capital, Kigali, where he was shown to the press. Rusesabagina did not speak to the media.

RIB STATEMENT ON THE ARREST OF PAUL RUSESABAGINA

1. RIB informs the general public that, through international cooperation, Paul Rusesabagina was arrested and is in the custody of RIB.

“Rusesabagina is suspected to be the founder, leader, sponsor and member of violent, armed, extremist terror outfits including the Rwanda Movement for Democratic Change [MRCD] operating out of various places in the region and abroad,” police said.

The 2004 Oscar-nominated film Hotel Rwanda showed Rusesabagina, a Hutu married to a Tutsi, as using his influence as a manager of the Hotel des Mille Collines, to allow more than 1,200 Tutsis to shelter in the hotel’s rooms. In the film, Rusesabagina was played by US actor Don Cheadle.

About 800,000 Tutsis and moderate Hutus were slaughtered in 100 days in Rwanda from April 6.

A well-known critic of President Paul Kagame, Rusesabagina had been living outside Rwanda since 1996, including in Belgium and the United States. He has won several international honours, including the US Presidential Medal of Freedom, which President George W Bush awarded him in 2005.

But back home, he has sparked outrage with warnings of another genocide, this time by Tutsis against Hutus. He has drawn criticism from some genocide survivors and Kagame who accused him of exploiting the genocide for commercial gain.

Rusesabagina has previously denied the government’s charges that he financially supports Rwandan rebels and said he was the victim of a smear campaign.

During his years abroad, he has also called the government of Kagame – who has been in power since 1994 when his forces overthrew the genocidal regime – a “dictatorship” and urged Western countries to press it to stop violating human rights – allegations the government denies.

Once championed in Western capitals as a reformer, Kagame has been criticised for overseeing constitutional changes to prolong his rule and cracking down on opposition voices.