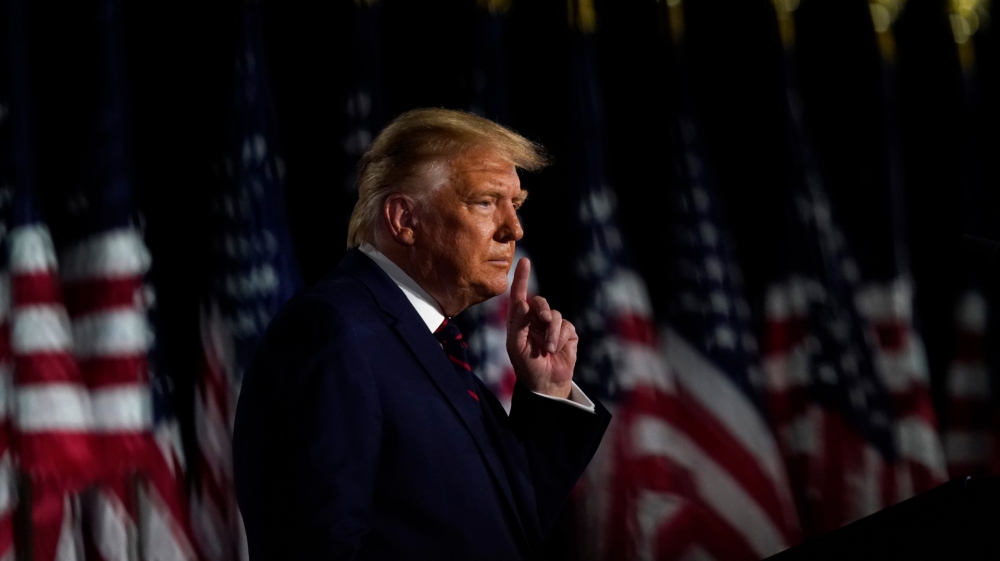 Donald Trump, a 74-year-old real estate mogul and former reality TV star who had never held public office until he was elected president of the United States in 2016, will vie for four more years in office against Democratic candidate Joe Biden in the November 3 election.

Born in the Queens borough of New York City, the son of a wealthy real estate developer, Trump’s life before taking office revolved around decades of business ventures that included real estate, hotels, golf courses and casinos, all bearing the family name.

Through several bankruptcies and reinventions, Trump, who became the president of the conglomeration of the family’s corporations in 1974, proved himself most adept at building the perception of success, which he promoted through his business-advice books.

To date, Trump’s wealth has not been revealed and he has resisted releasing his tax returns to the public, despite it being a common practice among modern presidential candidates.

In 2004, Trump, whose early marriages to Ivana Trump and Marla Maples became regular tabloid fodder, reached a new level of cultural prominence with the reality show The Apprentice, in which he judged candidates’ business skills as they competed for a contract to promote one of his properties.

Four years before the show launched, Trump made his first bid for the White House, running to be the candidate for the Reform Party, a third party founded by businessman Ross Perot just years earlier. Trump maintained he was taking the endeavour seriously, despite criticism the campaign was a publicity stunt.

In 2005, Trump married Slovenian model Melania Knauss, who would go on to be the country’s first lady. The president has three children – Donald Jr, Eric, and Ivanka – from his first marriage, a daughter, Tiffany, from his second marriage, and a son, Barron, from his current marriage.

In 2011, Trump made his next major foray into politics, becoming a vocal proponent of so-called “birtherism”, the unfounded – and widely-considered racist –  belief that President Barack Obama was born outside of the US and not in Hawaii. Trump gained some unofficial traction during the 2012 Republican primary but never officially ran.

Four years later, Trump, launched his next presidential bid, espousing an “America first” platform that relied heavily on anti-immigrant sentiment, scepticism towards multi-national organisations and the promise of bringing jobs back to the US. His campaign promised a return to a highly-idealised concept of the country’s past, vowing to “make America great again”.

“When Mexico sends its people, they’re not sending their best. They’re not sending you,” he told supporters inside the auditorium of Trump Tower in New York City as he launched his 2016 campaign and vowed to build a wall between the US and Mexico.

Trump’s meteoric rise during the Republican primary, and his unique ability to make the derogatory labels he gave his opponents stick, while controlling narratives with blatant untruths, culminated in his shock defeat of Democratic candidate Hillary Clinton in a tight electoral college victory in November of 2016.

During the campaign and while in the White House, Trump, who maintains a direct line of communication with his supporters through near-daily tweets, displayed a remarkable ability to escape unscathed from scandals that would usually scuttle most US politicians’ careers.

In December of 2019, Trump became only the third president, and the first in his first term, to be impeached by the House of Representatives over allegations he used the power of his office to compel the Ukrainian government to investigate a company linked to Joe Biden’s son, Hunter. Trump was later acquitted by the Republican-controlled Senate, with only one member of his party breaking ranks to vote for his removal from office.

Trump’s campaign has framed his re-election bid as a mission against an increasingly “radical” Democratic Party.

He has pointed to the strength of the US economy before the coronavirus pandemic, which he said was buoyed by deregulation and corporate tax cuts.

While Mexico served as a centrepiece in Trump’s 2016 campaign, during this cycle he has aimed his ire at China, which he blames for the coronavirus, often referring to the disease, which has caused more confirmed deaths in the US than any other country, as the “China Virus”.

Trump has also increasingly emphasised a law-and-order message that portrays cities and suburbs across the country as being threatened amid racial justice demonstrations that have swept across the US since May.

“If the Democrat Party wants to stand with anarchists, agitators, rioters, looters and flag burners, that is up to them,” Trump said, in accepting the party’s nomination during the Republican National Convention in August. “But I, as your president, will not be a part of it. The Republican party will remain the voice of the patriotic heroes who keep America safe and salute the American flag.”