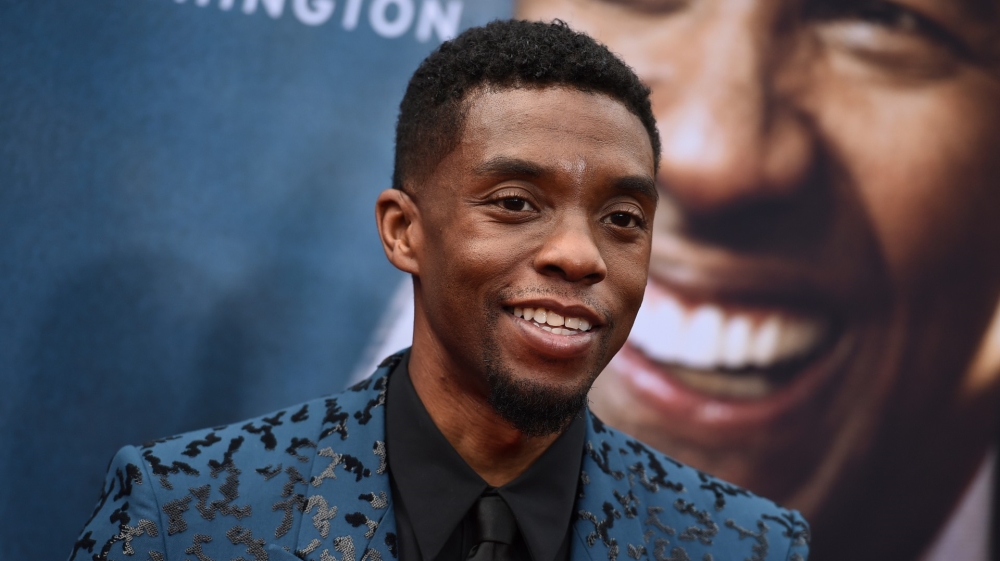 Former President Barack Obama has paid tribute to actor Chadwick Boseman, who portrayed Black American icons Jackie Robinson and James Brown before launching to a new level of fame as the lead in the Black Panther superhero franchise, one of the few films in the Marvel universe to feature a predominantly Black cast.

Boseman died on Friday at the age of 43 after a four-year battle with colon cancer.

“Chadwick came to the White House to work with kids when he was playing Jackie Robinson. You could tell right away that he was blessed,” Obama wrote on Twitter, referring to the first Black American professional baseball player who Boseman portrayed in the film “42”.

“To be young, gifted, and Black; to use that power to give them heroes to look up to; to do it all while in pain – what a use of his years,” he wrote.

Chadwick came to the White House to work with kids when he was playing Jackie Robinson. You could tell right away that he was blessed. To be young, gifted, and Black; to use that power to give them heroes to look up to; to do it all while in pain – what a use of his years. https://t.co/KazXV1e7l7

The president’s words were among a litany of memorials posted on social media from elected officials, actors, musicians on Saturday.

“A consummate professional, he absorbed every story, every memory and every photo and film excerpt he could consume to help translate the soul of an American hero,” said a statement from the Jackie Robinson Foundation.

“And now, Chadwick will be etched in history as a hero in his own right, especially have shown millions of Black and brown children the power of a superhero who looks like them. Chadwick – may you rest in peace eternally. Take your place among the greats. You earned it,” the statement.

Kamala Harris, the Democratic vice-presidential candidate, noted that she and Boseman had attended the same university.

Heartbroken. My friend and fellow Bison Chadwick Boseman was brilliant, kind, learned, and humble. He left too early but his life made a difference. Sending my sincere condolences to his family. pic.twitter.com/C5xGkUi9oZ

“Heartbroken. My friend and fellow Bison Chadwick Boseman was brilliant, kind, learned, and humble,” she wrote, referencing the mascot for the Howard University.

“He left too early but his life made a difference,” she wrote.

“The true power of @ChadwickBoseman was bigger than anything we saw on screen. From the Black Panther to Jackie Robinson, he inspired generations and showed them they can be anything they want – even super heroes,” Democratic presidential candidate Joe Biden wrote on Twitter.

Meanwhile, the governor of Boseman’s home state of South Carolina, Henry McMaster, said all flags at the statehouse had been ordered to fly at half-staff on Sunday to “honor the life, contributions and memory” of the actor.

To honor the life, contributions and memory of a truly extraordinary son of South Carolina @chadwickboseman – I have ordered the flags atop the Statehouse to be lowered to half-staff tomorrow, Sunday August 30, 2020, from sunrise to sunset. https://t.co/dMEHBIbBe5

“Chadwick was not only a deeply soulful and powerful actor, but he was such a kind, thoughtful, funny and gentle person. He brightened every ones day every time he walked into our hair and makeup trailer or on set with his beautiful smile,” actress Scarlett Johansson, who co-starred with Boseman in three Marvel films, said in a statement.

“Chadwick…..no words to express my devastation of losing you. Your talent, your spirit, your heart, your authenticity……..It was an honor working beside you, getting to know you….Rest well prince…May flights of angels sing thee to thy heavenly rest. I love you!” wrote actress Viola Davis, who co-starred in, Get on Up, and the upcoming adaptation of August Wilson’s, Ma Rainey’s Black Bottom, with Boseman.

“This broke me,” tweeted actor and writer Issa Rae.