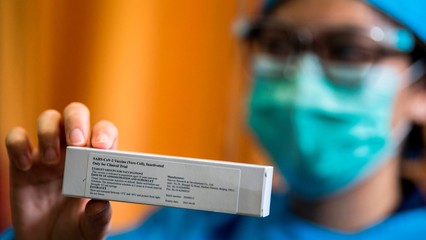 This has led to Indonesia advancing trials of a potential vaccine developed in China.

More than 2,000 Indonesians signed up to trial the vaccine developed by Chinese pharmaceutical manufacturer Sinovac.

In Pictures: How Ashoura was marked amid coronavirus restrictions |

The drop in the number of employees on payrolls indicates scarring of the economy after three COVID lockdowns.

The U.K. labor market weakened unexpectedly, with company payrolls falling for the first time in four months and more people dropping out of the workforce.

The number of employees on payrolls fell 56,000 in March, the Office for National Statistics said on Tuesday. The jobless rate fell to 4.9% in the quarter through February because 80,000 people became economically inactive, indicating they stopped looking for work.

The figures indicate scarring to the economy from three successive coronavirus lockdowns that forced most shops, restaurants and entertainment venues to close. Those segments all suffered big declines in payrolled employment despite Chancellor of the Exchequer Rishi Sunak’s effort to protect jobs with furlough payments, leaving overall employment about 800,000 below where it was before the pandemic struck.

“The bigger story is the continued crisis for young people,” said Tony Wilson, Director of the Institute for Employment Studies. “Youth long-term unemployment has hit a five-year high this morning, while youth employment is still falling even as it starts to rise for every other age group.”

This month’s figures confound recent surveys suggesting that companies restarted hiring in the weeks before lockdown loosened. The ONS said the number of job vacancies jumped 16% in March alone to 650,000, and that may feed through to higher employment in the coming months. Sectors including hospitality, retail and the arts had big increases.

“The jobs market has been broadly stable in recent months after the major shock of last spring,” said Darren Morgan, director of economic statistics at the ONS. “With the prospect of businesses reopening, there was a marked rise in job vacancies in March, especially in sectors such as hospitality.”

Unemployment claims rose 10,100 in March after a revised increase of 67,300 the previous month. Basic earnings growth, which has been inflated by lower-paying jobs dropping out of the labor market, was 4.4% in the quarter through February compared with 4.3% in the previous three-month period.

The Treasury and Bank of England expect a rapid recovery from the worst recession in three centuries starting in the middle of the year when most lockdown rules are set to lapse. Shops and restaurants started opening earlier this month.

Employment fell by 73,000 in the quarter thorough February, less than half the decline of 145,000 that had been anticipated by economists. At the end of February, 4.65 million workers were on furlough, down from a peak of 8.8 million at the start of the pandemic in April 2020.

The OBR expects the jobless rate to peak at 6.5% in the fourth quarter, or about 2.2 million people. That’s less than previously estimated and significantly below the peak of recessions in previous decades.

Denis Kakembo, the Managing Partner and leader of Corporate and Tax Practice at Cristal Advocates, has revealed that the continuous uninformed statements uttered by a section of Civil Society Organizations (CSOs) are frustrating the financing of the East African Crude Oil Pipeline (EACOP) project.

TEPU is the majority shareholder in the deal with 72% followed by Uganda with 15%, CNOOC with 8% while Tanzania have 5%. The project is however expected to be funded with borrowing from different banks, which have opted out of the deal.

In a March 18th press release issueed by Inclusive Development International, banks provided statements that they will not support the construction of EACOP, after an open letter endorsed by 263 organizations from around the world was sent to 25 banks considered most likely to be approached for financing.

Speaking to journalists at the sidelines of the ACME media training on oil and gas in Kampala on Monday, Kakembo wondered why CSOs have chosen to “just make noise without reading and understanding what’s on ground.”

“The perception people have towards oil and gas sector is old fashioned. Its true in the past oil companies didn’t behave well and this was in so many countries where they operated and people did not benefit so there is that historical bias which is still being held by people to date,” he said.

Adding: “The oil and gas industry has tremendously transformed over the period of time there is a lot of honor for an international law level perspective to ensure that people benefit and protect the environment and there are a lot of instruments that can be used to achieve this but these instruments can only be used when the CSOs understand and appreciate what they are.”

CSOs, he said, sometimes approach these issues on a perspective of an activist mind, “but not from a mindset of an informed person on what is taking place and yet if they understand fully what is taking place, they can serve their people in terms of articulating their concerns.”

“I would urge CSOs to take time, dig in and take more information which is readily available to boost and build their capacities.”

“Whenever there is an economic activity or project taking place, you would expect that people will be affected but there are other ways of mitigating that like; is the process transparent, are people being compensated, these are not very difficult issues, which can be addressed,” he said.

The said EACOP project is expected to kick off in six months’ time which Kakembo noted will be the final kickoff of each and everything including the declaration of Final Investment Decision (FID) by oil companies.


The IAE predicts that carbon dioxide emissions could rise to 33 billion tonnes in 2021 – the second largest rise in emissions ever.

Global carbon emissions are set to jump by five percent marking the largest single increase in more than a decade as the economic rebound from the coronavirus pandemic is “anything but sustainable” for the climate.

The International Energy Agency (IEA) published on Tuesday its annual Global Energy Review predicting that carbon dioxide emissions would rise to 33 billion tonnes this year, up 1.5 billion tonnes from 2020 levels.

“This is a dire warning that the economic recovery from the COVID crisis is currently anything but sustainable for our climate,” IEA Executive Director Fatih Birol said.

Global CO2 emissions are set to jump by 1.5 gigatonnes in 2021 – led by a rebound in coal demand mainly from the power sector.

It would be the 2nd largest rise in emissions ever. This economic recovery is anything but sustainable for our climate.

Birol called the Leaders Summit on Climate to be hosted by US President Joe Biden on Thursday and Friday a critical moment for nations to pledge immediate actions before the UN Climate Change Conference set for November in Glasgow.

“Unless governments around the world move rapidly to start cutting emissions, we are likely to face an even worse situation in 2022,” said Birol.

In early March, the IEA’s chief stressed that the level of carbon emissions in December was higher than the same month the previous year as economies started reopening following coronavirus lockdowns, a figure that the IEA’s chief said was a “stark warning” to leaders around the world.

United Nations Secretary-General Antonio Guterres urged countries on Monday to back up their commitments to fight climate change with “concrete immediate action”, including making as their “absolute priority” that no more coal power plants will be built.

Last year, when power use dropped due to the COVID-19 pandemic, energy-related CO2 emissions fell by 5.8 percent to 31.5 billion tonnes, after peaking in 2019 at 33.4 billion tonnes.

The IEA’s annual review analysed the latest national data from around the world, economic growth trends and new energy projects that are set to come into action.

Global Energy Review 2021 is out now!

Based on the latest data from around the world, the report shows that global energy demand and CO2 emissions are rebounding strongly this year.

Global energy demand is set to increase by 4.6 percent in 2021, led by developing economies, pushing it above 2019 levels, the report said.

Demand for all fossil fuels is on course to grow in 2021, with both coal and gas set to rise above 2019 levels.

The expected rise in coal use dwarves that of renewables by almost 60 percent, despite accelerating demand for solar, wind and hydro power. More than 80 percent of the projected growth in coal demand in 2021 is set to come from Asia, led by China.

Coal use in the US and the European Union is also on course to increase but will remain well below pre-crisis levels, the IEA said.

The IEA expects both solar and wind to post their largest annual rises ever, at around 17 percent.

It expects renewables will provide 30 percent of electricity generation worldwide in 2021, their biggest share ever and up from less than 27 percent in 2019.

China is expected to account for almost half of that increase.

While demand for oil is rebounding strongly, the IEA expects it to stay below the pre-pandemic level as the aviation sector struggles to recover owing to a slow and patchy vaccine rollout.