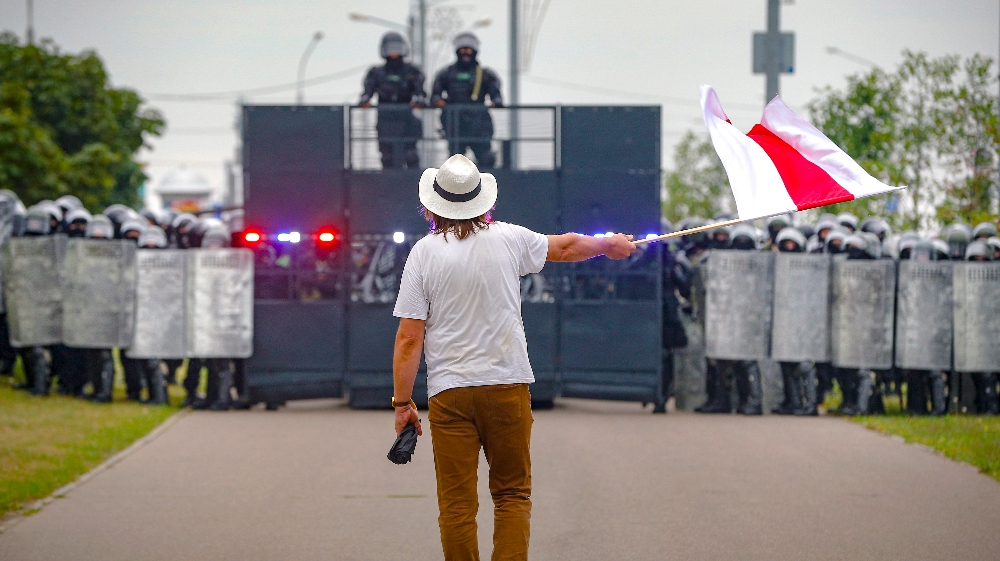 Authorities in Belarus have deported some foreign journalists reporting in the country and withdrawn the accreditation of many Belarusian reporters covering large anti-government protests that erupted after a disputed presidential election earlier this month.

Tens of thousands of people have taken to the streets in recent weeks, rejecting President Alexander Lukashenko’s landslide victory in an August 9 vote his opponents say was rigged.

The Belarusian Association of Journalists said on Saturday at least 17 journalists were stripped of their accreditations, which are issued by the foreign ministry. Among them were  a video journalist and a photographer from Reuters news agency, two from the BBC and four from Radio Liberty.

“We condemn in the strongest possible terms this stifling of independent journalism,” the BBC said.

The Associated Press news agency also said two Moscow-based journalists who were covering the recent demonstrations in Belarus were deported to Russia on Saturday. Also, the AP’s Belarusian journalists were told by the government that their press credentials had been revoked.

“The Associated Press decries in the strongest terms this blatant attack on press freedom in Belarus. AP calls on the Belarusian government to reinstate the credentials of independent journalists and allow them to continue reporting the facts of what is happening in Belarus to the world,” said Lauren Easton, the news agency’s director of media relations.

Germany’s ARD television said two of its Moscow-based journalists also were deported to Russia, a Belarusian producer faces trial on Monday and their accreditation to work in Belarus was revoked.

The decision was taken on the recommendation of the country’s counterterrorism unit, AFP news agency cited government spokesman Anatoly Glaz as saying.

Lukashenko, who has been in power since 1994, is facing an unprecedented protest movement since the election in which he claimed a victory with some 80 percent of the vote

Earlier this month, the opposition organised two major demonstrations and has called for a large-scale protest on Sunday to demand the 65-year-old step down.

In comments at a government meeting on July 23, Lukashenko threatened to expel foreign journalists, accusing them of inciting protests against him before the vote.

“President Lukashenko has previously complained about foreign media’s coverage of protests in Belarus, and has cracked down on foreign media,” said Al Jazeera’s Bernard Smith, reporting from Vilnius in Lithuania.

He noted that most journalists affected by Saturday’s move were Belarusians who work for foreign media organisations.

“If they continue to work without accreditation, they risk being arrested,” Smith said.

The protests, some of which drew enormous crowds estimated at 200,000 or more, are the largest and most sustained challenge of Lukashenko’s 26 years in office, during which he consistently repressed opposition and independent news media.

Dubbed by critics as “Europe’s last dictator”, Lukashenko has denounced a Western plot to bring him down.

The demonstrations have sparked a violent police crackdown condemned by rights groups and Western leaders.

At least three people have died and hundreds have been wounded in the violence, while in the first days of demonstrations, some 7,000 people were detained and many of them were beaten by police. The violence, however, did not deter the protests and may have galvanised the opposition. Strikes have broken out in several state-owned factories, which are the backbone of Belarus’s economy.

The results of the presidential election have been rejected by the European Union, which is preparing sanctions against high-ranking Belarusian officials and has urged Lukashenko to set up a dialogue with the opposition.

Related Topics:BelarusEuropepress freedom
Up Next