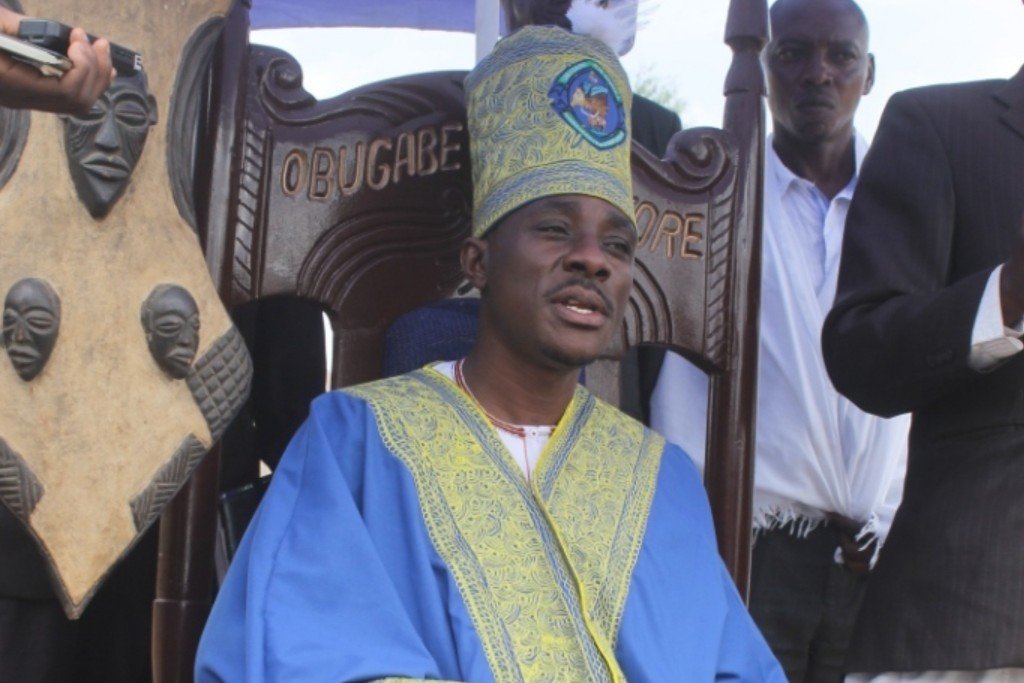 High Court in Mbarara on Thursday ruled that Umaru Assimwe Rubambansi has no right to proclaim himself the Monarch of Ankole kingdom.

Asiimwe crowned himself as the King (Omugabe) of Ankole on October 29, 2016 at the Kingdom palace located in Itaaba Kyabanyoro, Rwampara County in Mbarara District.

But one Phillip Musiime through his lawyers of Kato Frank and company advocates last year 2019 filed a case accusing Asiimwe of trying to take over the Ankole kingdom and holding an unlawful coronation ceremony when he was not the legitimate King of Ankole.

Justice Gordon Musiime the Mbarara High Court judge in his ruling ordered that Asiimwe and his agents restrain from parading him as the king of Ankole.

The judge further declared the first coronation by the defendant as wrongful and contrary to Article 246 (1) and (6) of the Constitution.

Speaking to journalists after the court ruling at the Mbarara high court, Umaru Asiimwe dismissed the verdict calling it politically motivated and promised to announce his next move very soon.

Asiimwe also called for calmness on the side of his followers who seemed to be oblivious of the court decision itself since the clerk to court never interpreted for them in vernacular.

Amid a limited supply of vaccines, COVID-19 cases have been on the rise across the Americas, PAHO officials said.

Amid a scramble to secure enough coronavirus vaccines in the Americas, there are reports of fake doses proliferating on the black market in several countries in the region, the Pan American Health Organization (PAHO) said on Wednesday.

“We have received some information from Mexico, Argentina and Brazil that some doses have been offered through social media, illegal markets offering vaccines that probably are falsified,” Jarbas Barbosa, assistant director of PAHO said during a weekly news conference.

“They are not real vaccines or maybe they are stolen doses from a health facility that no one can assure that they were properly stored,” Barbosa said.

On Wednesday, The Wall Street Journal reported that Pfizer had identified counterfeit vaccines in Mexico and in Poland. According to the report, 80 people in Mexico had been jabbed with fake doses in a clinic, after paying $1,000 per dose.

She said PAHO was working with tech companies to tackle misinformation that has quickly proliferated on the internet and on social media sites.

“Because unreliable information spreads quickly, PAHO is collaborating with tech companies like Twitter, Google, and Facebook to address fake news and ensure the public can easily find accurate information,” she said.

The reports of fake vaccines and vaccine hesitancy in the Americas came amid a scarce supply of vaccines in the region, and a rising number of COVID-19 cases.

“Latin America is the region that currently has the greatest need for vaccines,” Etienne said, “this region should be prioritised for distribution of vaccines.”

“No one will be safe until we are all safe.”

Nearly half of the world’s coronavirus deaths during the weekend were in the Americas, Etienne said, adding that nearly every country in Central America is reporting a rise in infections. Cuba, Puerto Rico and the Dominican Republic, she said were the worst hit.

“Over the weekend, the world reached a tragic milestone – more than three million have lost their lives to COVID, and nearly half of these deaths happened right here in the Americas,” Etienne said.

Chile is seeing a plateau in cases, while Brazil is reporting a drop. But despite the drop, Etienne said, cases in Brazil “remain alarmingly high.” Argentina ranked third regionally in the weekly number of new cases. Colombia, Venezuela, Bolivia and Uruguay were also seeing a worsening. And Mexico, after weeks of decline in new cases, is seeing a slight increase.

The good news is that after strengthening public health measures, Chile 🇨🇱 has seen cases plateau, and after a difficult few months, Brazil 🇧🇷 is reporting a drop in cases – including in the Amazon region.

Regionally, the United States and Chile have made the most progress in their vaccination campaigns – both have vaccinated about 40 percent of their population – according to Our World in Data.

Uruguay has inoculated more than 30 percent of its population while Brazil has so far vaccinated 11.6 percent and Mexico has vaccinated about 8.7 percent. Other nations in the region are lagging behind.

During the news briefing, officials said most of the region’s countries are relying on the global COVAX mechanism, which aims to equitably distribute vaccines to developing nations.

Etienne said more than 4.2 million vaccine doses have so far been supplied to 29 countries in the Americas through COVAX, and more doses are on the way.


An independent United States’ commission has called for India, Russia, Vietnam and Syria to be added to a State Department blacklist on religious freedom.

The US Commission on International Religious Freedom, an independent government panel that gives recommendations to presidential administrations and Congress, said the four countries should be designated as “countries of particular concern” (CPC) on the State Department list, which currently includes Myanmar, China, Eritrea, Iran, Nigeria, North Korea, Pakistan, Saudi Arabia, Tajikistan, and Turkmenistan.

In particular, the recommendation of India as a CPC, the second year the commission has done so, has in the past been controversial.

It pointed to allegations of police complicity in violence against Muslims during deadly riots last year in New Delhi and continued concerns about a citizenship law championed by Modi that critics have said defines Muslims as non-Indian.

New Dehli did not immediately respond to the newest annual report, but last year dismissed the recommendation as “biased” and a “new level of misrepresentation”.

The report also said Sudan, Bahrain and Central African Republic no longer met the “high threshold” to be recommended for the State Department’s special watch list (SWL). All three countries had been recommended for that list in the previous annual report.

In further recommendations to the Biden administration, the commission called for a review of policies for blacklisted countries that currently have waivers in place to protect them from US penalties for abuses of religious liberties.

It called on the administration to review the waivers for Nigeria, Pakistan, Saudi Arabia, Tajikistan, and Turkmenistan “and make appropriate policy changes to demonstrate meaningful consequences and encourage positive change commission”.

Commissioners also called on the Biden administration to raise its cap on refugee admissions. The administration has said it will announce a new cap by May 15, after facing blowback for plans to keep the administration of President Donald Trump’s historically low quota.

The Biden administration, the commission said, should also officially label the persecution of Rohingya in Myanmar as “genocide” and lift the cap on refugee admissions.

At a news conference on Wednesday, Anurima Bhargava, a civil rights lawyer and vice chair of the commission, said they were urging “the administration to definitively and publicly conclude that the atrocities committed, and that are ongoing against the Rohingya people by the Burmese military constitute genocide, and acting accordingly, as a State Department recently determined regarding China’s genocide of Uighur and other Turkic Muslims.”

In China, the report said, religious freedom had again “deteriorated” in 2020, as the government targeted “religions perceived to have foreign connections, such as Christianity, Islam, and Tibetan Buddhism”. The commission cited reports the persecuted groups were subject to surveillance, detention, torture, and rape.

Commissioner, Johnnie Moore, a Trump appointee to the panel, said “the Democratically-appointed and Republican-appointed commissioners on this commission speak with one voice on the threats of the of the Communist Party in China.”

“This is the more than the consensus view, this has become the passion of this commission,” he said.

The report released Wednesday also noted the effect of the coronavirus pandemic, with Chairwoman Gayle Conelly Manchin saying the pandemic had an overall net negative effect on freedom of religion.

While some restrictions on religious gatherings were in line with public health concerns, there were also instances “where minorities were targeted in a much stricter fashion and their activities restricted much more harshly than other religions”.

“There were countries that literally blamed the COVID-19 virus on a particular religion, that they were responsible for the spread of … the virus across their country,” she said.

The report specifically cited Dalits in India blamed for spreading the coronavirus, suggestions in Iran that the coronavirus was a Jewish conspiracy, Protestant Christians accused of spreading the virus in Russia, and a Saudi lockdown on the majority Shia province of Qatif.

Meanwhile, the commissioners praised some blacklisted countries, including Eritrea, for releasing religious prisoners during the pandemic.