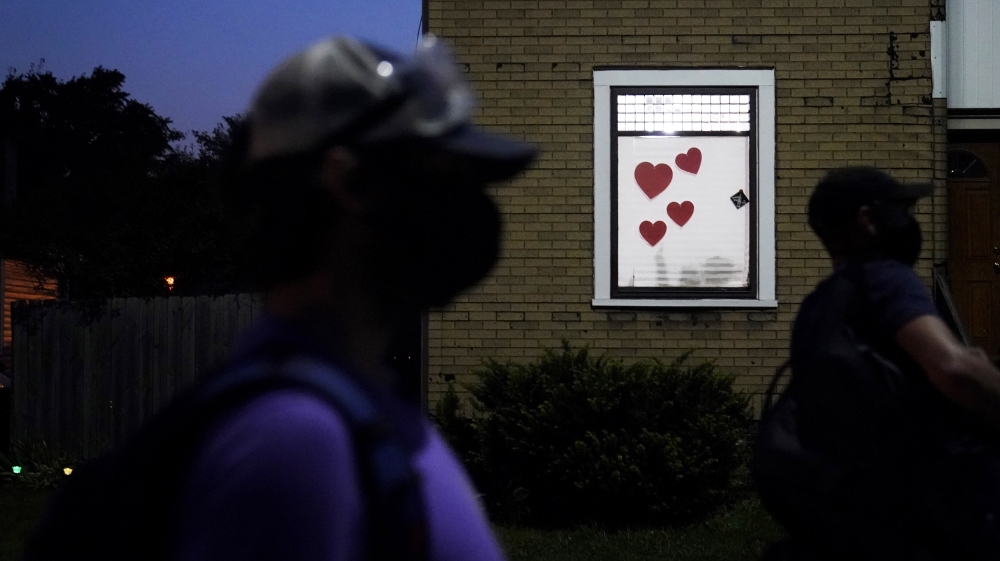 Marchers were reportedly solemn on Wednesday night during ongoing protests over the August 23 shooting of Jacob Blake – a Black man paralysed from the waist down after he was shot seven times by police in front of his three children in Kenosha, Wisconsin in the United States.

Protests in the city the previous night had turned chaotic when two demonstrators were killed and a third was wounded in a shooting incident.

Police have arrested and charged Kyle Rittenhouse, 17, with murder in connection with the shooting. Footage of the incident captured on mobile phone cameras has been posted online.

This is what we know about the victims.

Anthony Huber, 26, of Silver Lake, was known as a talented skateboarder and “class clown”, according to the Milwaukee Journal Sentinel.

This is #AnthonyHuber, one of the victims from last night’s shootings. His loved one tells us he was a super talented skater and shared this video with us. They’re honoring his memory by asking everyone to please come to Basik skate park to pay respects. #SkateForHuber #Kenosha pic.twitter.com/a5WGWGQJhL

He was shot while attacking the shooter with his skateboard in order to save another person from being shot, according to unconfirmed social media posts.

Huber is survived by his partner Hannah Gittings and a daughter, according to a GoFundMe fundraiser organised for her benefit. The initiative had raised over $91,000 as of Thursday afternoon.

“His final act says more about him than any words could. The rest of the world is watching the USA in horror – hopefully this innocent death can finally stir some positive action, and Anthony’s family (and many others) get justice”, one donator named Alice Nicholl wrote.

The second victim was Joseph Rosenbaum, a 36-year-old originally from Waco, Texas who had moved to Kenosha in the past year to be close to his daughter, his sister told the Chicago Sun-Times.

It quoted her saying Rosenbaum – who is survived by a fiance as well as his daughter – was a compassionate father and she wanted him to be remembered as the goofy and crazy man who he was.

“May you forever be with the angels and rest easy bro. I love you!” his sister wrote on Facebook, according to the Milwaukee Journal Sentinel.

A Kenosha County Sheriff’s Department vehicle arrives on the scene during a fourth night of unrest in the wake of the shooting of Jacob Blake by police officers, in Kenosha, Wisconsin, the US [Matt Marton/EFE-EPA]

By Thursday afternoon, a fundraiser organised in Rosenbaum’s name by his friend Adriana Garcia had raised a little over $5,000 of its $25,000 goal. The money will be used solely for funeral services, according to the GoFundMe page.

The Chicago Sun-Times said Rosenbaum’s sister discouraged contributions saying it was not needed because funeral expenses were covered.

Gaige Grosskreutz, 26, reportedly from West Allis, Wisconsin, was shot in the arm during the protests. The wound was reportedly severe, but he is expected to survive. Online video shows a man appearing to be Grosskreutz holding a handgun.

Grosskreutz had been volunteering as a medic in the Black Lives Matter protests over the summer, WTMJ-TV Milwaukee reported.

Grosskreutz, who was also volunteering in Kenosha the night he was shot in the arm, received medical aid on the scene and was taken to a local hospital, where he was recuperating on Thursday.

A fundraiser for Grosskreutz has also been organised. It says he will need “multiple surgeries” to save his arm.

The GoFundMe campaign had raised over $8,000 of its $50,000 goal as of Thursday afternoon. It says the money will be used to help pay for medical costs.