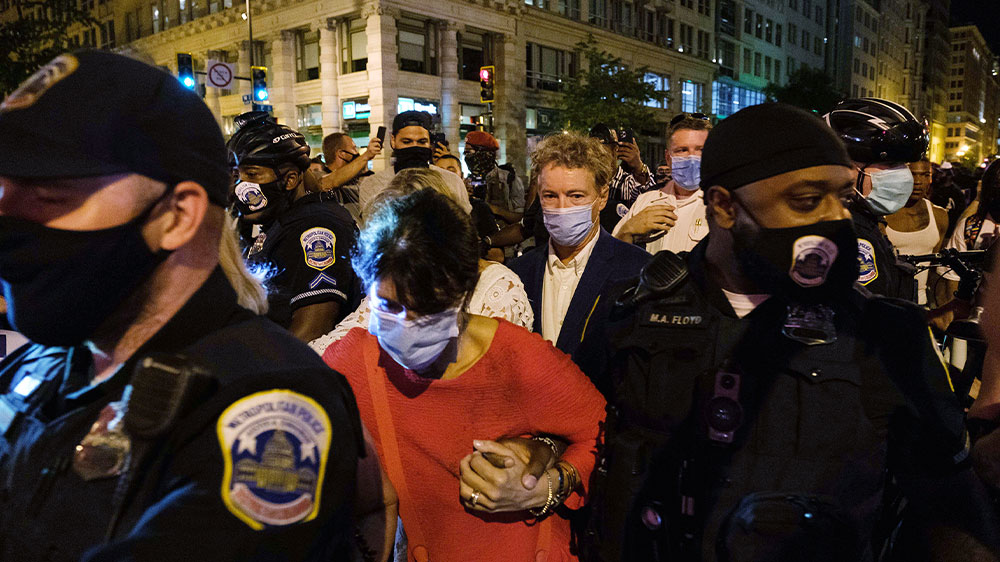 Republican Senator Rand Paul has called on the FBI to investigate a crowd of protesters that surrounded him and other Republicans as they departed the White House following President Donald Trump’s acceptance of his party’s nomination for re-election.

Paul told the conservative Fox News television channel he believes the group chanting his name and pushing against an impromptu police escort was paid to incite a riot. He did not say who he believed financially backed them or offer any evidence that anyone had been paid.

“I believe there are going to be people who were involved with the attack on us that actually were paid to come here and are not from Washington, DC, and are sort of paid to be anarchists,” Paul said on Friday.

“The FBI needs to investigate but the only way you can do it is, you have to arrest people,” Paul said.

Just got attacked by an angry mob of over 100, one block away from the White House. Thank you to @DCPoliceDept for literally saving our lives from a crazed mob.

The Republican senator, his wife and two guests had scrapped plans to walk to their hotel near the White House following Trump’s Thursday night speech at the Republican convention after they saw large crowds demonstrating.

Instead, they took a bus with others to the Trump International Hotel and then attempted to take an Uber back. When protesters blocked the car, they walked. Demonstrators recognised Paul and immediately drew close. His group then found police for protection.

Video posted online shows a crowd surrounding Paul, his wife and the police. One man yells repeatedly, “Say her name,” a reference to Breonna Taylor, a Black woman killed by police in March in Kentucky, the state that Paul represents.

One officer appears to use his bicycle to push a protester and stumbles into Paul after the protester shoves him. At no point does the video show Paul being physically attacked.

Rand Paul just got chased by a crowd back to his hotel, after leaving the White House from Trump’s Republican Party Nomination #DC #DCProtests pic.twitter.com/h1kPcZG1jh

Paul said protesters also threatened “to f*** you up” and “to kill you”.

Republican US House Representative Brian Mast shared a video of protesters stopping him outside the White House, where one repeatedly shouts, “What do you think about police killing Black people in this country?” and drowns out his answers.

Protesters harass congressman @BrianMastFL. He repeatedly says that it is wrong for anyone to be murdered, but the crowd seems to want him to address black people being murdered pic.twitter.com/12YLL4aVbS

Fellow US Representative Jim Jordan also told Fox News the demonstrations were so crowded when he left the White House that he decided to get a ride with House Minority Leader Kevin McCarthy, who had Capitol Police protection.

An elderly man was just punched in the head at Lafayette square. Not sure what started this. (Twitter cut off the first part of the video in my last tweet) pic.twitter.com/JuHajh1nhl

Lafayette Square across from the White House was the site of protests earlier this summer, following the police killings of Taylor and African American George Floyd. Washington’s city government later changed the name of the street leading to the square to Black Lives Matter Plaza.