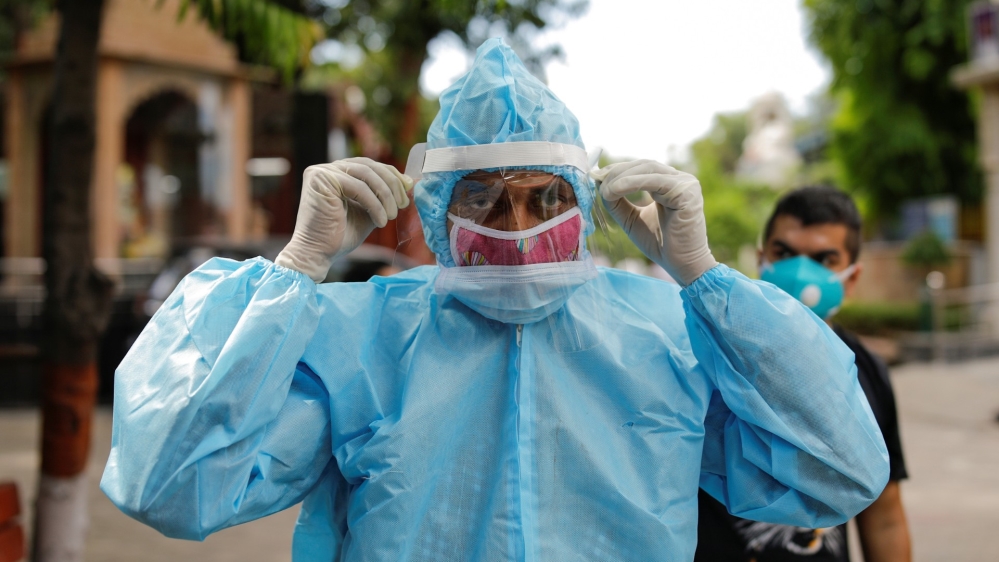 India is struggling to contain the spread of the novel coronavirus, with its total number of cases having now surged past the three million mark.

It is the third-worst affected country hit by the virus after the United States and Brazil.

But, for the past three weeks, the South Asian nation has been reporting the world’s highest daily new infections.

On Friday, the health ministry reported a record jump of 77,266 cases and 1,057 related deaths over the past 24 hours.

“India is at a precarious stage in the containment and management of the COVID-19 epidemic. The total number of COVID-19 cases in the country has been increasing undaunted,” Sanghmitra Sheel Acharya, a professor at the Centre of Social Medicine and Community Health at New Delhi’s Jawaharlal Nehru University, told Al Jazeera.

What is leading to the record rise and why has India struggled to flatten the coronavirus curve?

Here are five things to know:

Health authorities have ramped up testing across the country by nearly five-folds within two months.

More than 39 million cumulative tests have been conducted so far, according to the Indian Council of Medical Research (ICMR), with an average of 800,000 samples being taken on a daily basis.

Dr Poonam Khetrapal Singh, regional director at the World Health Organization’s (WHO) Southeast Asia office, said the increased surveillance was contributing to the surge in numbers.

“Over the last few weeks, testing has been rapidly scaled up across the country,” Singh told Al Jazeera.

Since June, several states have authorised the use of cheaper and less accurate rapid antigen testing kits.

This testing technique is faster than most standard PCR tests and many do not require a lab for processing or any specialised equipment or trained personnel.

But health experts have raised concern that the antigen tests – which test for the viral proteins – can miss infections and and lead to false negatives, contributing to the spread of the virus in hard-hit areas.

India’s case death rate – the number of deaths among the positive cases – has remained relatively low. It is currently at less than 2 percent.

Similar trends have been observed in other South Asian countries, including Pakistan, Bangladesh and Sri Lanka.

But some experts have questioned whether deaths are being accurately documented in India, with as many as 78 percent of deaths not being medically certified under normal circumstances.

The recovery rate is nearly 76 percent, with more than 2.5 million people recovered among the 3.3 million cases registered.

Since early August, India has been reporting the world’s highest daily new infections – between the 60,000 to 70,000 case range.

Its three-million-case milestone on Sunday came just 17 days after it crossed the two million mark.

The virus is spreading particularly rapidly in the rural areas – where two-thirds of the country’s 1.3 billion population lives.

Lockdown restrictions have been eased and businesses reopened in most parts of the country. People are seen not wearing masks in public places or practising physical distancing.

Acharya from JNU said despite the country’s efforts and comparison to the devastation caused by the pandemic in the developed countries, India has “not managed to flatten the curve”.

In late March, India imposed a nationwide lockdown, the world’s largest affecting, 1.3 billion people. At the time, the country had recorded 519 infections, including 10 deaths.

The nearly two-month-long strict shutdown sparked a humanitarian crisis, with tens of millions of migrant workers stranded in cities across the country losing their jobs, battling hunger, running out of money and struggling to return to their home villages.

Acharya, the professor at JNU in New Delhi, said the government should have formulated a formidable plan to mobilise the healthcare system and better prepare for the pandemic during that time, instead of focusing on symbolic rituals of lighting up candles and banging pots and pans on balconies.

“The lockdown was imposed restricting movement across cities and states, when the government needed to facilitate reaching home safely and providing safety if unable to reach home,” she added.

WHO’s Singh said scaling up response capacities has been challenging, but the strict public health measures have been largely effective.

“India used the lockdown period to strengthen and scale up its health systems, set up facilities for COVID-19 care, train healthcare workers and procure essential medical supplies. Now, as the world transitions to a new normal, India, much like other countries is gradually opening up to regular business.”

Hospitals across the country are overwhelmed, with many running out of beds and ventilators for COVID-19 patients.

Meanwhile, thousands of women health workers on the front line of the pandemic went on strike this month to demand better pay and proper protective gear.

Acharya said the onus was on the state governments, which oversee the health sector, to provide care to the needy and direct its efforts towards those in need of critical care rather than all the infected cases.