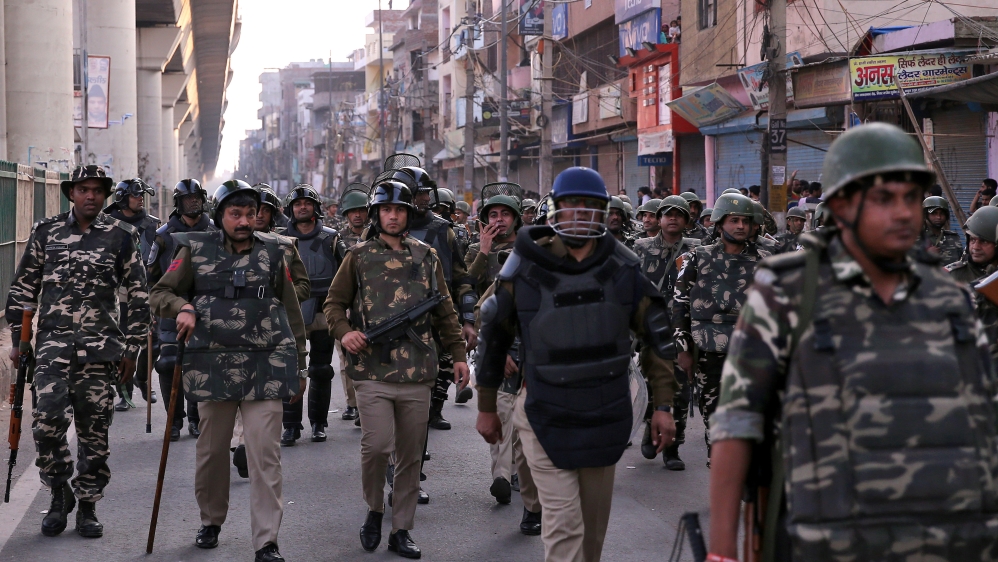 Police in Delhi were “complicit and an active participant” in the February violence in which 53 people, mostly Muslims, were killed, Amnesty International India said in a statement on Friday.

“The Delhi police personnel were complicit and an active participant in the violence that took place in Delhi in February 2020, yet in the last six months not a single investigation has been opened into the human rights violations committed by the Delhi police,” the rights group said.

Amnesty said it spoke to riot survivors, witnesses, human rights activists and retired police officers and analysed several user-generated videos for the investigation that reveal a “disturbing pattern of grave human rights violations committed by the Delhi police during the riots”.

The rights group called on the Indian government to conduct a thorough and impartial investigation into the alleged human rights violations committed by the police in what was the worst religious violence seen by the capital in decades.

“The Delhi police reports to the Union Ministry of Home Affairs (MHA) and it is shocking that there has been no attempt by the MHA to hold the Delhi police accountable till now,” Avinash Kumar, executive director of Amnesty International India, said in a statement.

Deadly violence broke out in February after weeks-long peaceful sit-in protests by Muslims in northeast Delhi against a controversial new citizenship law were targeted by Hindu nationalist mobs. More than 500 people were also injured, according to the government.

The police were accused of either supporting the mobs or looking the other way as the capital burned.

Other violations included excessive force on protesters, torture in custody and dismantling of protest sites, an Amnesty investigation revealed. The police and the government have denied the accusations.

“This ongoing state-sponsored impunity sends the message that the law enforcement officials can commit grave human rights violations and evade accountability. That they are a law unto themselves,” Kumar, the Amnesty International India head, said.

The Delhi Police has yet to respond to Amnesty’s request for a comment on the investigation.

The UK-based rights group launched an investigative briefing into the riots, documenting the timeline of the alleged police brutality and analysing the role of political leaders who made hateful speeches in the build-up to the violence.

Mostly Muslims and less than a dozen Hindus were killed between February 23-29, with many of the dead said to have died of bullet wounds.

In addition to street battles, there was also immense destruction of public and private property, with homes, shops and mosques set ablaze.

“Delhi has witnessed two major communal violence incidents across a period of four decades – the 2020 riots and the 1984 Sikh massacre,” Amnesty said. “A common link between both the incidents is the human rights violations committed by the Delhi police.”

The law eases the path for non-Muslims from neighbouring Muslim-majority nations to gain citizenship. The UN has termed the law “fundamentally discriminatory”.