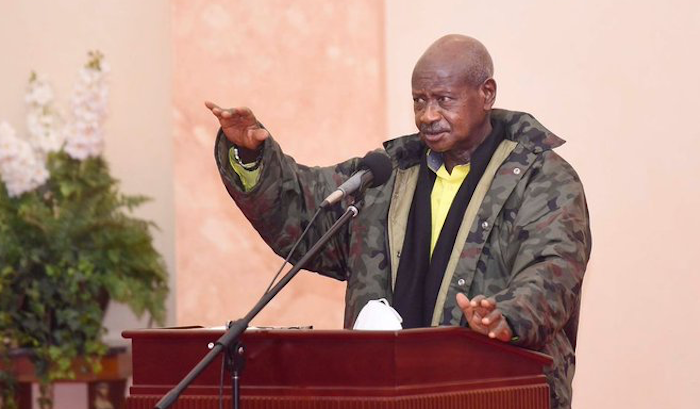 President Yoweri Museveni has accused Kyadondo East MP and presidential aspirant Robert Kyagulanyi of infiltrating Ugandan security and killing his own supporters so as to implicate his government.

In a statement issued today August 27, Museveni made reference to the 2018 Arua incident in which Kyagulanyi aka Bobi Wine’s driver Yasin Kawuma was shot dead during a scuffle between his presidential guards, SFC and Kyagulanyi’s supporters.

Since then, several Bobi Wine supporters have been killed in several confrontations and skirmishes with security personnel including Dan Kyeyune who was shot dead in the head in Nansana in February this year. Bobi Wine supporters were returning from the burial of their colleague, Ritah Nabukenya in Kiboga district, who had two days earlier, been knocked dead allegedly by a police truck in Nakawa while on her way to attend court.

“In Arua, they stoned my vehicle and attacked NRM supporters who were coming from my rally. They had even driven a road grader (tinga tinga) all the way from Kampala, I think, to use in ramming our vehicles (kutomera). The SFC soldiers in a disciplined way delivered me to the helicopter first and went looking for the ring-leaders – Bobi Wine, Zaake and others. Eventually, they found them in a hotel. These wonderful gentlemen tried to assault our soldiers with punches. The soldiers punched them back until they subdued them.” Museveni wrote.

“It is very impressive that the soldiers never used guns against Bobi Wine and Zaake in the hotel rooms where they were making a fool of themselves trying to box soldiers as if they were boxing village thieves. One person died outside the hotel in mysterious circumstances. These groups have been in collusion with foreign enemies to infiltrate groups with guns to kill demonstrators and say that government is the one killing them. We are patiently following up those,” he added.

Museveni says he has now issued new directives to police to arrest anyone including ministers who flout coronavirus guidelines. It comes at a time when Uganda’s coronavirus deaths and cases have spiked to 28 and 2,679 respectively.

Both ruling National Resistance Movement (NRM) party and opposition politicians have flouted the preventive guidelines by holding mass campaigns that have attracted multitudes of people.

The trend was set off by Health minister Jane Ruth Aceng and Information and National Guidance minister Judith Nabakooba who held mass gatherings in their home areas while trying to canvass for votes. For flouting the guidelines, the police only seems to come hard on members of the opposition and Museveni says the fact that the ministers flouted the guidelines is no invitation for others to defy as well because they will be arrested.

“We had contained the disease because the majority followed the guidelines. You cannot, if you care about Ugandans, therefore, say: “Because Aceng and Nabakooba have made a mistake, therefore, let all of us behave recklessly and many of us die”.

“Regarding the politicians that have been gathering People contrary to the guidelines, my order to the IGP is now out. No. 1, no Public meeting of any type have been allowed since March except the ones following the guidelines. In the past, the politicians (Aceng, Anite, etc.) were pleading that the People were gathering against their will. The order now is: “Do not put yourself in a situation where People gather around you. If you do, we shall arrest you.” he said.