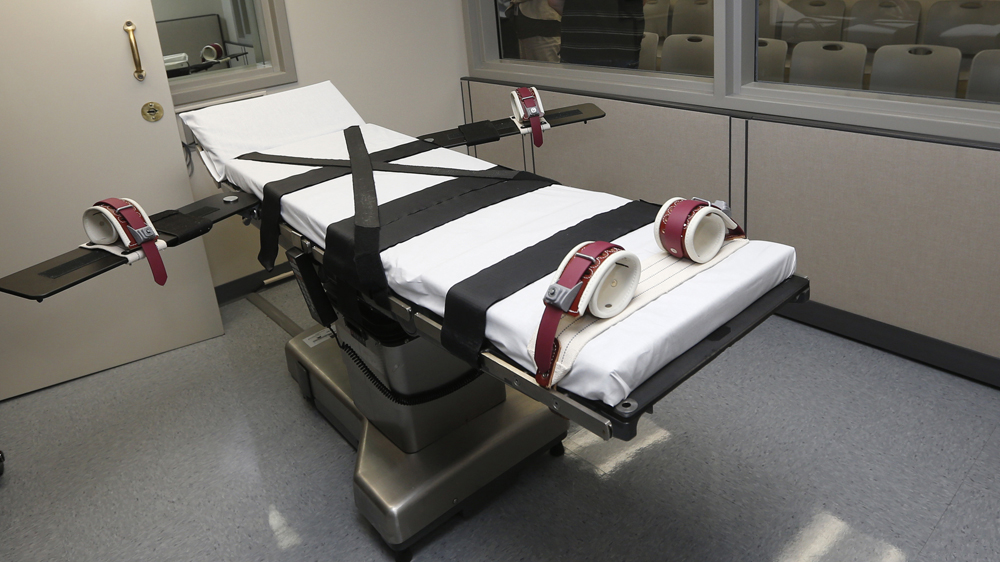 A US District Court judge in Washington, DC, has ordered a halt to the federal government’s planned execution on Friday of Keith Dwayne Nelson, saying its lethal injection protocol violates a federal law regulating prescription drugs.

In an opinion released early on Thursday, US District Judge Tanya Chutkan said the law requires the government to get a prescription for the lethal injection drug pentobarbital, which it plans to use to execute Nelson.

It is unlikely any medical professionals would issue the prescription. The government is appealing.

Nelson’s execution was scheduled to be the fifth one this year by the federal government at the death chamber of the federal prison in Terre Haute, Indiana. Nelson has been sentenced to death for the rape and murder of a 10-year-old girl.

The news comes the day after the only Native American on federal death row was executed against the wishes of the Navajo Nation, which called the sentence an affront to its sovereignty.

Lezmond Mitchell, 38, was put to death via lethal injection on Wednesday evening at the Terre Haute prison, 19 years after he was convicted of killing a young girl and her grandmother, the prison announced.

“Justice finally has been served,” said the US Justice Department spokeswoman, Kerri Kupec, in a statement.

But Mitchell’s lawyers said the federal government had “added another chapter to its long history of injustices against Native American people”.

Most crimes committed in the United States are tried in state courts, some of which are authorised to apply capital punishment.

But federal courts can take up and try the most serious cases, or crimes committed in jurisdictions outside state control, such as – under certain conditions – Native American reservations.

Federal courts rarely deliver capital punishment sentences and carry them out even less frequently. From 1988 until July, only three people on federal death row were executed.

However, under the administration of President Donald Trump, a staunch advocate of the death sentence, executions have stepped up.

Three people were executed in July. They were all convicted for the murder of children, often having committed their crimes in a particularly violent manner.

Mitchell was convicted of fatally stabbing a 63-year-old grandmother during a car theft in 2011 and slitting the throat and crushing the skull of her nine-year-old granddaughter. He then buried the heads and hands of the two victims.

Because the killings occurred on Navajo territory in Arizona and the victims and Mitchell were tribe members, US authorities should have obtained the approval of the Navajo Nation for the death penalty, say community officials who point to a 1994 law governing Native American tribal sovereignty.

The Navajo refuse to apply capital punishment to Native Americans, and the victims’ family had asked that Mitchell be sentenced to life imprisonment.

A legal challenge, concerning the sovereignty of tribal justice, failed at the last minute in the US Supreme Court.

Trump, who is standing for re-election on November 3, has advocated expanding the use of the death penalty, in particular for those convicted of killing police officers or children and for drug traffickers.