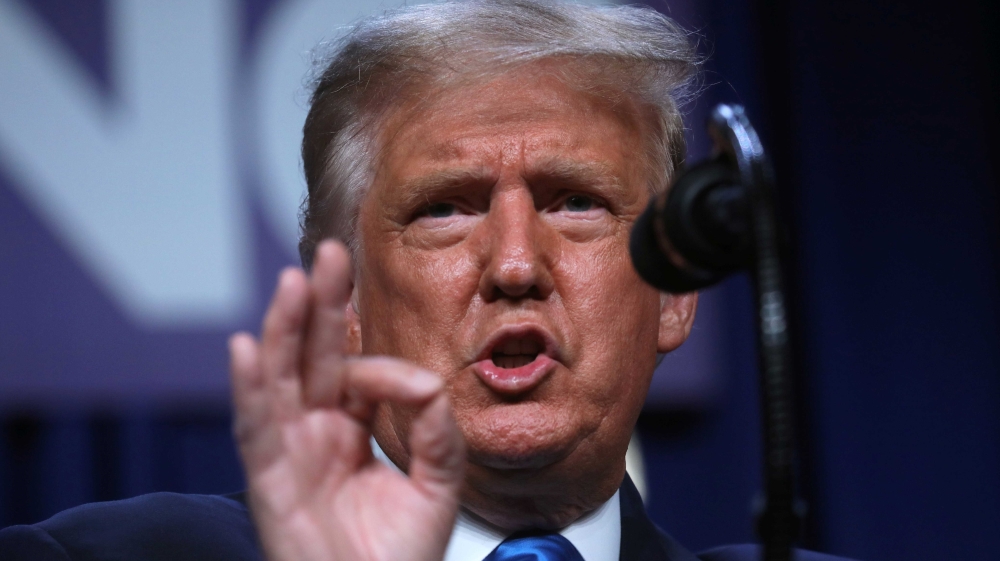 President Donald Trump will formally accept the Republican Party’s nomination for the upcoming presidential election in a speech at the White House on Thursday night that will be aimed at rallying his base of political supporters and addressing the crises of the pandemic, cratered economy and civil unrest confronting the United States.

Trump is expected to tell a television audience of as many as 20 million that the US economy was prospering before the coronavirus pandemic because of Republican tax cuts and deregulation of business and that the economy is roaring back in a “V-shaped” recovery under his leadership.

While the US stock markets have recovered from a plunge in March triggered by the coronavirus shutdowns, a dual recovery is emerging with some companies and workers prospering in the digital economy while others are struggling to get by in the physical world of bricks and mortar that is in the throes of a painful, sharp downturn.

On Thursday, the US Department of Labor reported that some 27 million Americans are collecting unemployment benefits from state and local programmes, and Congress and the president have yet to agree on a new rescue package that would be needed to keep the economy afloat through the end of the year.

Trump is taking centre stage at the Republican National Convention at a time when outrage about the police shooting of a Black man in Kenosha, Wisconsin, has sparked new protests and riots, amplifying the civil unrest that has swept US cities since May.

Trump has adopted a pro-police, anti-rioter posture towards the protests and has sought to stoke fears among white voters that election of Joe Biden and the Democratic Party, which supports police reform proposals, would lead to lawlessness and chaos.

“The chaos that began with the first George Floyd protests on Memorial Day has reached its inevitable and bloody conclusion,” Carlson said on Wednesday.

Kenosha devolved into anarchy because the authorities abandoned the people. Those in charge, from the governor on down, refused to enforce the law. They’ve stood back and watched Kenosha burn. Are we really surprised that looting and arson accelerated to murder? pic.twitter.com/oul2KUiDi3

Carlson’s remarks drew a backlash causing “Fire Tucker Carlson Now” to trend on Twitter with many saying he was justifying the killing. Rittenhouse has been charged with first-degree intentional homicide.

Democratic presidential nominee Biden said on Thursday Trump is exploiting the violence in Kenosha and other cities to help his re-election campaign.

“He views this as a political benefit to him. He’s rooting for more violence,” Biden said on MSNBC, a liberal-leaning television news outlet.

“He’s encouraging this. He’s not diminishing it at all. This is his America now,” Biden said.

Protesters march in Minneapolis during a demonstration against police brutality and racism after a video circulated on Sunday showing the shooting by police of Black man Jacob Blake – multiple times, in the back – as he tried to get in his car, in Kenosha, Wisconsin [Kerem Yucel/AFP]

Biden leads Trump by 7 percentage points in a rolling average of national polls calculated by RealClearPolitics.com. Trump argues the contest is closer and is making a case he can come from behind to win key swing states in the Electoral College as he did in 2016.

Trump and his supporters contend that the president has done more for Black Americans than any other president since Abraham Lincoln who freed the slaves during the US Civil War in 1862. As evidence, they point to high Black employment prior to the pandemic, Trump’s support for tax benefits for urban neighbourhoods, funding for historically Black colleges and criminal justice reform.

“Trump is really in a strange position because as the incumbent he is likely to take a lot of blame from for voters for the current situations, not only for the economy and the pandemic, but also for the civil unrest and rioting,” said Keith Whittington, a professor of politics at Princeton University.

The president has said he is not responsible for civil unrest in the cities, placing responsibility on state and local politicians, “a reasonable approach – from his perspective”, Whittington told Al Jazeera.

Democrats have criticised Trump for using the White House as a stage for his acceptance speech. Trump and his team have broken with US political norms that generally prohibit politicians from using federal resources for campaign purposes.

Trump will deliver his speech to a select audience of Republican legislators and party donors assembled on the South Lawn of the White House.

Using the historic building and official residence of the US presidents as a backdrop, Trump’s campaign seems to want to create a monumental setting for the speech similar to Trump’s remarks at Mount Rushmore, South Dakota, on July 3, the day before the US’s Independence Day.

In his Mount Rushmore speech, Trump warned of a “new far-left fascism” that is waging “a merciless campaign to wipe out our history, defame our heroes, erase our values and indoctrinate our children”. 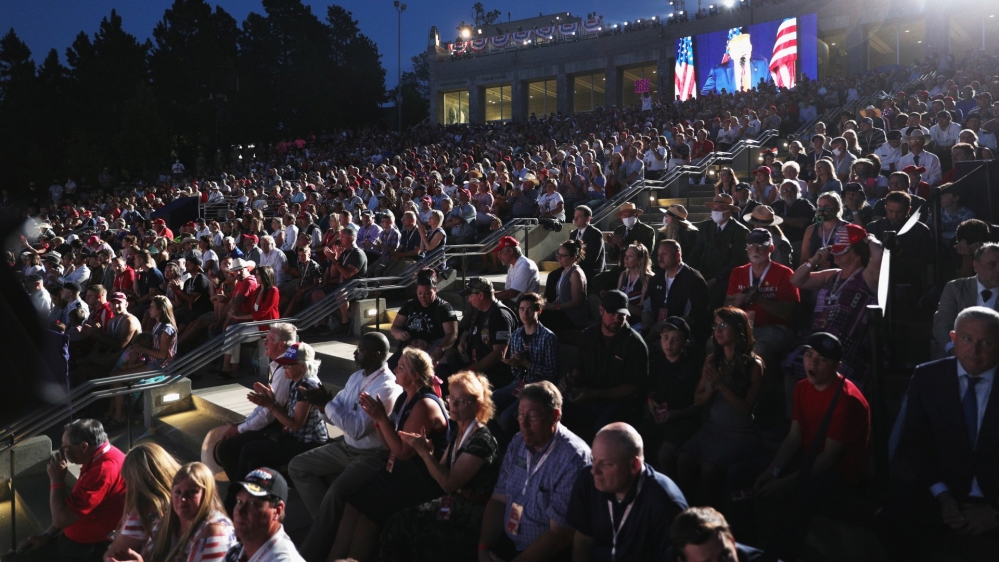 Attendees listened as President Trump spoke at South Dakota’s Mount Rushmore on July 3, 2020; Trump will use the White House as a backdrop for a similar speech on the last night of the Republican National Convention [File: Tom Brenner/Reuters]

Vice President Mike Pence spoke live to the convention programme from an outdoor venue at historic Fort McHenry in Baltimore on Wednesday, and first lady Melania Trump spoke live from the Rose Garden at the White House on Tuesday.

“I felt so blessed sharing a stage with Maddox”—Karole Kasita