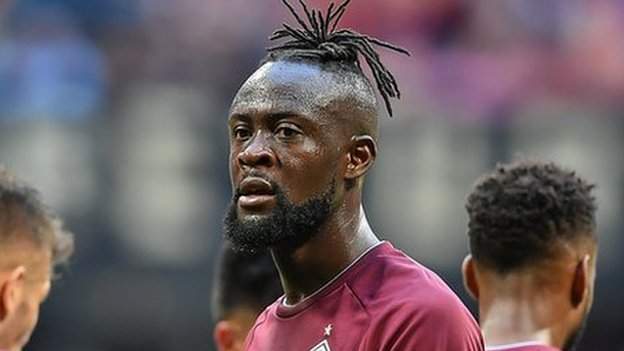 Ex-Sierra Leone striker Kei Kamara feels the campaign for social justice is more important than sport in the United States at the moment.

He was talking as his Major League Soccer (MLS) side Colorado Rapids decided not to play against FC Dallas in protest against the shooting of Jacob Blake.

Blake, a black man, was shot seven times in the back by police on Sunday in Kenosha, Wisconsin near Milwaukee.

“We don’t want to distract from what attention should be on, which is injustice happening to the black community.”

“So we want to make sure that we stand in solidarity for that, and make sure that we’re not just going on TV playing sports and people are watching and taking their minds off something bigger that’s happening in the country.”

It was part of a wider walkout by teams in various sports across the USA on Wednesday.

The sporting walkout began with basketball as the NBA postponed Wednesday’s three play-off games after the Milwaukee Bucks called off their fixture in protest.

In baseball, three MLB games were called off after teams decided not to play, and five MLS matches have been postponed.

Tennis player Naomi Osaka pulled out of a WTA match on Thursday with a strong statement saying there were more important things to deal with than watching her play tennis.

Organisers of the Cincinnati event later postponed all matches on Thursday in support of the campaign “against racial inequality and social injustice.”

A point backed up by Kamara: “It’s not about soccer or basketball or the rest.”

“And we have to follow also the NBA players who are standing in solidarity.”

“It’s very powerful (the Bucks’ walkout). Their platform is bigger than ours but when they stand for something that we also believe in as black players… there’s no way we can go in the other direction.

“We cannot stand behind closed doors. We are in support what the NBA did and they empowered our voices at the same time to say this is something we can stand for today as professional athletes together…

“Enough is enough. We’re professional players and black players and the rest of our brothers and sisters are standing together to say it’s not just about sports.

“Right now football is really just a game. It’s not life, and life is what is more important right now.”

He is also confident that sports working together can make a real statement.

“Sports is the most powerful tool around the world. Sports has the platform to stand together… during the pandemic everyone was talking about how they missed sports,” the former Norwich City and Middlesbrough forward pointed out.

“We don’t want those things to be forgotten about.”

Kamara added that he and other sportspeople are already thinking about what they can do next.

“It’s something we have to go sleep on tonight and then have more conversations in the morning to see how we go forward,” he explained.

“And see what the league does too because this is something the MLS has to take a stand with us in knowing where the players’ mindset is.”

Kamara is also concerned about the mental health of the players who are not focussed on their sport because of everything that is happening.

In June Kamara and his family joined in the protests in Colorado over the death of George Floyd as he was being arrested by police.