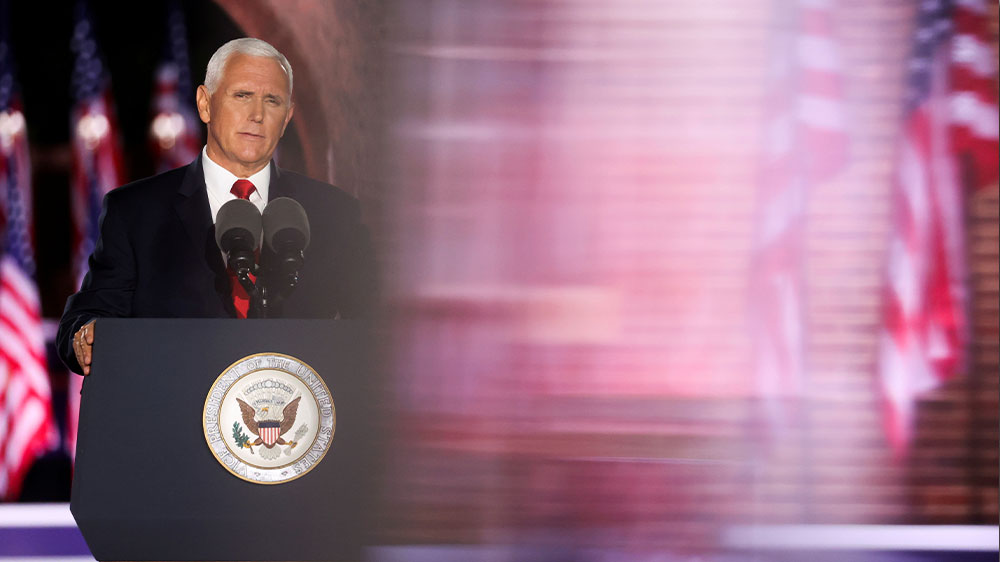 Vice President Mike Pence headlined the third night of a virtual Republican National Convention with a patriotic call for the re-election of President Donald Trump who he said had set the United States on “a path of freedom and opportunity”.

Backed by the red-white-and-blue symbolism of the American flag, Pence spoke at Fort McHenry which withstood a naval bombardment by the British Navy in 1814 and inspired the words of the US national anthem, “O say does that star-spangled banner yet wave…”

“If you look through the fog of these challenging times you will see our flag is still there,” Pence told a Republican audience in remarks on the coronavirus pandemic and civil unrest sweeping the country.

For the first time in the Republican convention, which concludes on Thursday with President Trump’s acceptance speech, Pence offered the core argument Trump and his Republican Party are making for his re-election; that the US economy was soaring before the pandemic and Trump is succeeding in controlling the outbreak and getting the economy moving again.

“The coronavirus struck from China,” Pence said, repeating a line Trump uses to cast blame for the outbreak on China because the novel coronavirus was first discovered in the central city of Wuhan.

Trump’s travel restrictions to China announced on January 31 were only partial and did not apply to Americans going back and forth.

Pence touted the White House’s partnership “with private industry to reinvent testing and produce supplies across the country including producing 100,000 ventilators in 100 days.

The US now conducts thousands of tests a day and has delivered “billions of pieces of personal protective equipment”, Pence said, although hospitals and public health officials continue to report constraints in testing and shortages of equipment.

“We are on track to have the world’s first, safe and effective coronavirus vaccine by the end of this year,” Pence said, praising the heroism of American health care workers and emergency responders.

“Thanks to the courage and compassion of the American people, we are slowing the spread, we’re protecting the vulnerable, and we’re saving lives, and we’re opening up America.”

Pence was the first speaker at the largely virtual Republican convention to directly address the coronavirus pandemic that has killed more than 180,000 people in the US, devastated much of the economy and put more than 30 million people out of work. First Lady, Melania Trump, on Tuesday expressed her sympathy for the families of those who had died.

Pence took note of Hurricane Laura’s landfall on the Gulf coast of Louisiana and Texas and said the Federal Emergency Management Agency (FEMA) was prepared to assist people displaced by the Category 4 storm that was packing a catastrophic sea water surge of 15 to 20 feet.

Pence condemned “the violence and chaos engulfing cities across this country.”

“The violence must stop whether in Minneapolis, Portland, or Kenosha too,” he said.

The convention has been overshadowed by civil unrest and riots in Kenosha, Wisconsin, where two people protesting against the police shooting of a Black man were allegedly killed by a white teenager who sympathised with police. Trump has sided with police over protesters since the unrest began in May. 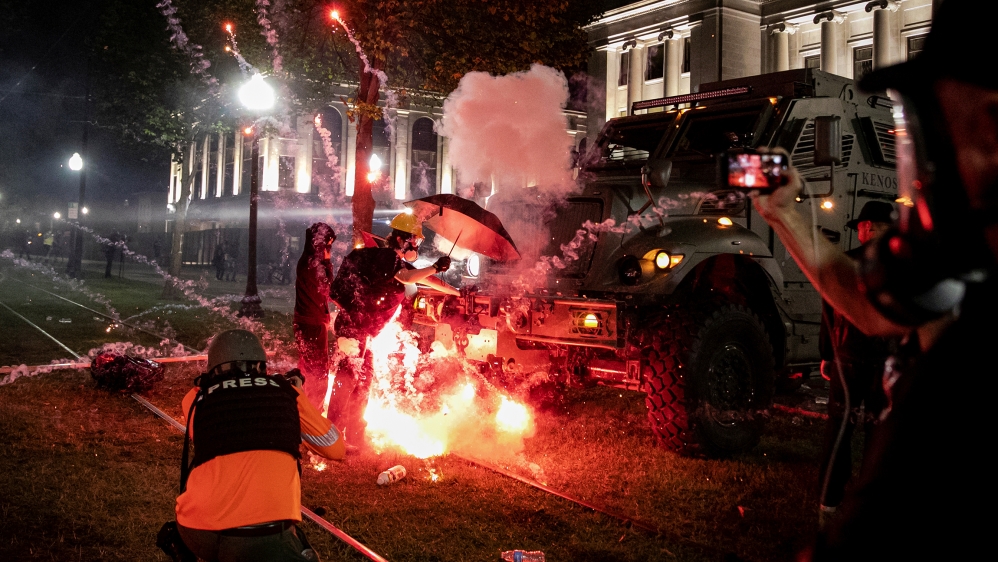 An incendiary device goes off in front of a Kenosha Country Sheriff Vehicle as demonstrators take part in a protest following the police shooting of Jacob Blake, a Black man, in Kenosha, Wisconsin, August 25, 2020. [Brendan McDermid/Reuters]

Police arrested a 17-year-old, Kyle Rittenhouse from nearby Antioch, Illinois and charged him with homicide on Wednesday. A Kenosha County sheriff said Rittenhouse may have been part of a vigilante group that intended to protect property from protesters.

“Donald Trump is offering real and lasting change and unprecedented opportunity to rise, a country that embraces the spirit of the civil rights movement of the Sixties, a place where people are judged by the content of their talents and abilities , not by the colour of their skin,” said Clarence Henderson, a civil rights activist who participated in a lunch-counter sit-in in 1960. 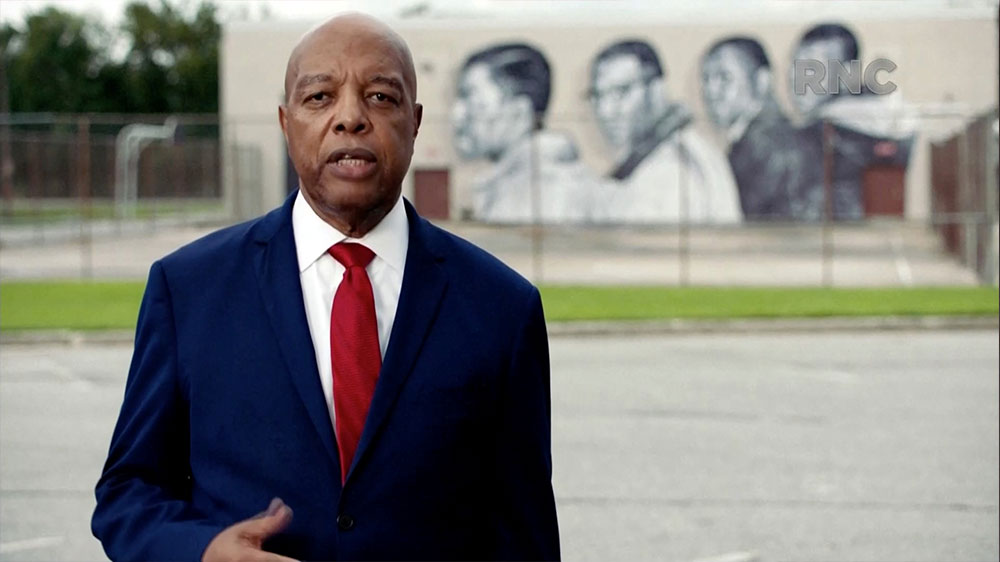 Three nights of destructive protests in Kenosha had been sparked by the shooting of Jacob Blake, a Black man, who was paralysed below the waist and has undergone surgery.

Blake, who was unarmed, was shot multiple times in the back at close range by an officer who was holding onto Blake’s shirt as he tried to lean into his vehicle. Police said they later found a knife on the driver-side floor of Blake’s car.

The officer who shot Blake was identified by Wisconsin state authorities as Rusten Sheskey, a white man who has been working at the Kenosha Police Department for seven years.

Wisconsin Governor Tony Evers called out the National Guard on Monday after protesters set cars on fire, smashed windows and clashed with police in riot gear.

Trump and Republican speakers in the convention programme have sought to characterise the protests against police shootings that have swept the US since May as riots by a dangerous, violent mob encouraged by Democrats.

Trump tweeted on Wednesday morning that he was sending more National Guard troops and federal agents to impose “law and order”.

We will NOT stand for looting, arson, violence, and lawlessness on American streets. My team just got off the phone with Governor Evers who agreed to accept federal assistance (Portland should do the same!)…

“From Seattle and Portland to Washington and New York, Democrat-run cities across this country are being overrun by violent mobs,” claimed South Dakota Governor Kristi Noem at the opening of the Republican convention on Wednesday night.

“The violence is rampant. There’s looting, chaos, destruction, and murder. People that can afford to flee have fled. But the people that can’t – good, hard-working Americans – are left to fend for themselves,” Noem said.

Republican US Senator Marsha Blackburn, who represents the state of Tennessee, said Democrats want to defund “our military, our police, even ICE” and “take away their tools to keep us safe”.

“Joe Biden, Kamala Harris and their radical allies try to destroy these heroes, because if there are not heroes to inspire us – government can control us,” Blackburn said. 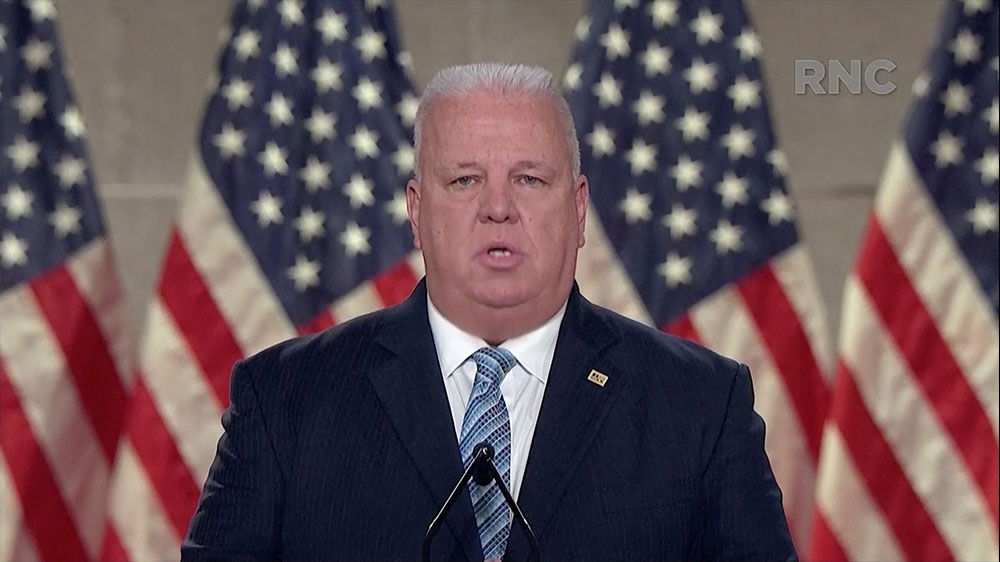 Michael McHale, the president of the National Association of Police Organizations, said, “Joe Biden has turned his candidacy over to the far-left, anti-law-enforcement radicals.” [Republican National Convention/Handout via Reuters]

But outrage over the shooting of Blake spread on Wednesday to the National Basketball Association when members of the Milwaukee Bucks team decided to boycott a scheduled playoff game against the Orlando Magic.

The NBA announced it would postpone three playoff games on Wednesday to a later date.

The boycott triggered more game cancellations by the WNBA and Major League Baseball in a widening political shutdown of sports events.

China fires ‘aircraft-carrier killer’ missile in warning to US | News

The Mith soars with 16-track ‘The UGANDAN’ music album