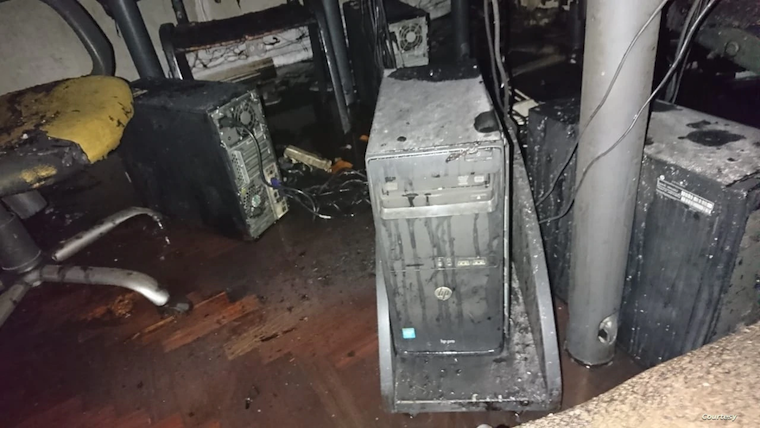 Staff at a weekly Mozambique newspaper are refusing to let an arson attack stop them from reporting. Canal de Moçambique published its regular Wednesday edition, just three days after the newsroom was firebombed.

Speaking in front of the newspaper’s office Monday, Matias Guente, executive editor of Canal de Moçambique, said he believed Sunday’s attack was retaliation for the paper’s reporting and described the arson as a “terror attack on freedom of expression and against press freedom.”

The paper’s editorial line “will not bow before the fire,” Guente said. The office was attacked with petrol bombs, and a container of gasoline was found at the site, the Associated Press reported.

Police are investigating the blaze in Mozambique’s capital Maputo, which damaged the publication’s newsroom and equipment. The paper, owned by the media group Canal I, prints about 10,000 copies weekly and has about 50,000 subscribers to its daily news website, CanalMoz.

“This attack represents a serious blow to the freedom of the press, one of the foundations of democracy,” the local civil society organization Center for Democracy Mozambique said in a report Monday.

Canal de Mozambique is known for its critical coverage of the government, including authorities’ responses to attacks by Islamist militants, as well as corruption and scandals such as the “tuna bonds” case.

In January 2019, Mozambique indicted 18 individuals on charges including abuse of office and embezzlement after some funds from loans to bolster the country’s state fishery were allegedly diverted, according to the Organized Crime and Corruption Reporting Project.

Guente, the editor, has also been previously harassed and in December, attackers attempted to abduct him, VOA Portuguese reported at the time.

“Freedom of the press is a pillar of democracy achieved by Mozambicans and must be protected,” said Nyusi in a statement posted to his Facebook page.

A tent was erected after the attack so the paper’s journalists could work because “everything was left in ash,” said Guente. The paper has around 17 staff in the capital, as well as reporters in most of Mozambique’s 10 other provinces.

Mediacoop, the publisher of Savana and Mediafax, also invited Canal to use its premises and facilities to ensure it can continue publishing, the Associated Press reported.