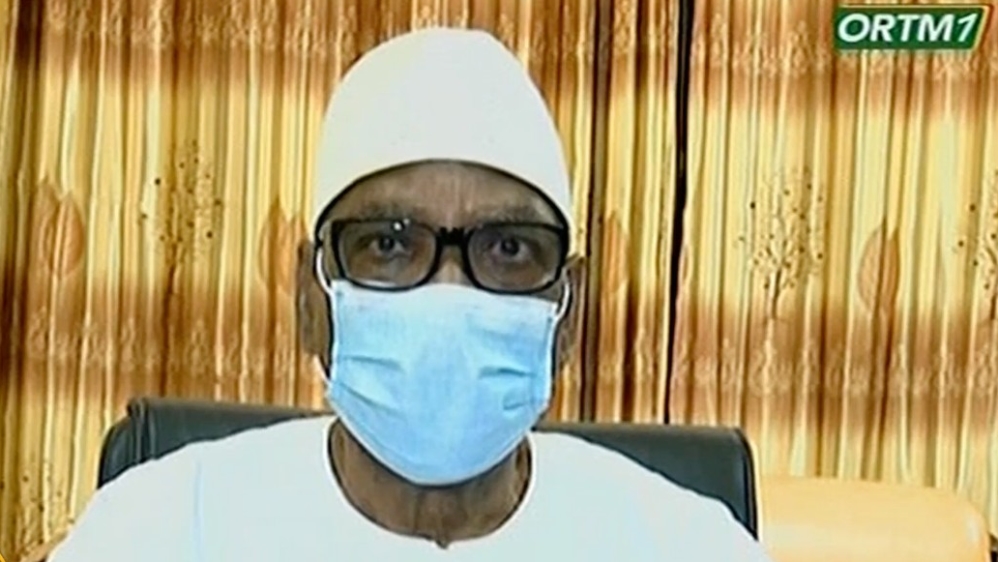 A group of military officers, who call themselves the National Committee for the Salvation of the People (CNSP), has controlled the West African country since August 18, when the mutineers detained Keita at gunpoint and forced him to resign.

“President IBK is free in his movements, he’s at home,” CNSP spokesman Djibrila Maiga told AFP news agency, referring to Keita by his initials as many Malians do. He gave no further details.

A relative of Keita, speaking on condition of anonymity, told AFP the 75-year-old former leader had returned overnight to his house in the Sebenikoro district of the capital, Bamako.

Keita, Prime Minister Boubou Cisse and other senior officials were seized by rebel troops who staged a mutiny at a base near Bamako on August 18.

The next day, Keita appeared on national TV to announce his resignation, saying he had had no other choice and wanted to avoid “bloodshed”.

The deposed president’s release had been a key demand of Mali’s neighbours and international organisations, including the African Union and the European Union.

West Africa’s regional bloc, ECOWAS, had sent a delegation to Bamako over the weekend to negotiate with the coup leaders.

The military leaders say they mutinied because the country was sinking into chaos and insecurity which they said was largely the fault of a poor government.

They have promised to oversee a transition to elections within a “reasonable” amount of time.

The CNSP told the ECOWAS delegation that they want to stay in power for a three-year transition period, Nigeria said on Wednesday.

In contrast, the West African bloc is seeking for a transitional government of no more than one year.

Police in Bushenyi district are holding the pastor of Star Light Worship Center International for allegedly having sex with a juvenile.

It’s alleged that Kushemerwa has been sleeping with this young girl since her parents allowed her to stay with the pastor’s family during the COVID-19 lockdown.

The suspect was arrested after a tip off from his wife who is also a pastor at the same church.

“The wife reported a violence case to Police and told us that his husband has also been using that girl whom they stayed together with. We called the girl here and she also confessed. We therefore had to arrest the pastor; he is in our cells now”, Tumusiime said.

Kushemerwa is currently detained at Bushenyi police station and will face defilement charges in court once Police investigations are done.

The Uganda Communications Commission (UCC) Executive Director, Mrs. Irene Kaggwa Ssewankambo has called on young girls to embrace ICTs and challenge their male counterparts in the world of technology.

Mrs. Kaggwa was speaking to various primary school girls that had gathered at UCC headquarters in Kampala on Thursday to commentate the International Girls in ICT day.

“When we were growing, people used to say this is a men’s world. They would tell you, leave that for boys. Is it because of what they (boys) are? We can do what boys do. So, if they can do it, you can do it,”  Kaggwa told the girls.

Celebrated every April 22, International Girls in ICT Day was established by the UN specialized agency for ICT, International Telecommunication Union (ITU) to celebrate women and girls and encourage them to pursue studies and careers in Science, Technology, Engineering and Mathematics (STEM).

Giving an example of herself, ICT Minister Judith Nabakooba and a number of female engineers at UCC and other female telecommunication engineers that always climb masts to fix technical glitches, Mrs. Kaggwa assured young girls that engineering should never be perceived as a men’s world by the society.

“Do not be held back by this society. What matters is what you want to be. We celebrate and we want to encourage more women to get into this field. We now have women who are in journalism, we have women in the telecoms. Before, many of these were extremely dominated by men and women would mainly take on secretarial roles, catering roles but now we see that even in the classes (computer classes, engineering classes, journalism classes) you actually see that more women have embraced this area of ICTs,” she said.

“So, in terms of what needs to be done, we need to get the message out there to help women appreciate what opportunities are there, help them understand what they can do and also for them to stop thinking that the only professions that are there are nursing, secretarial. There are so many areas where we need women.”

With the rapid expansion of Artificial Intelligence, she said, women should be brought onboard to have soft skills so that technology is complementary to human beings.

World over, children are being introduced to technology when they are young, and as a result, Kaggwa said, girls need to be exposed to technologies at a younger age so that the technology interest is nurtured in them and their innovativeness so they can get exposure that other children in other countries are getting.

“It should not be to say that they are the leaders of tomorrow. We need to groom them so that by the time they are there, they understand how to develop solutions to our challenges.”

Meanwhile, Mrs Kaggwa encouraged girls to never lose hope in case they feel their dream is not engineering and ICTs.

“If you don’t like mathematics or science, don’t say ICTs are not for me. We need lawyers, we need doctors. That is why we encourage all of you to continue your interest,” she said.


At the age of 22, Marielle Bacason experienced something that would change her life forever. In 2013, Typhoon Haiyan hit the Philippines with record ferocity, killing thousands of people and affecting millions of others.

Winds of up to 315kmph (197mph) destroyed everything in their path. When the superstorm finally subsided, Bacason said, “You could not distinguish the roads and dead bodies of people and animals everywhere. We feared for our safety every day, especially during the night. We just wanted to leave Tacloban … I was traumatised.”

Bacason did not just leave, she took action. She joined other brave survivors, local activists, workers, and fisherfolk to assert their fundamental rights before the Commission on Human Rights of The Philippines. The Commission announced that 47 big companies, including Shell, ExxonMobil, Chevron, BP, and Total, could be found legally and morally liable for human rights harms to Filipinos resulting from climate change.

Despite widespread acknowledgement that burning fossil fuels is the main cause of the climate emergency, governments are yet to take real action against the industry even while the future of the planet, and all who live on it, hangs in the balance.

Air pollution from coal, oil, and gas killed 8.7 million people globally in 2018 alone, and the climate crisis already has an annual death toll of more than 100,000 – a fast-climbing figure – with some organisations saying 100 million people will die by 2030 and billions more will be displaced. Perhaps it is a testament to the extreme greed (or extreme cowardice) of those in power that they continue to allow dirty energy corporations to fuel a crisis that even they and their loved ones will not escape.

In fact, none of us will be safe unless the global economy shifts to run on renewable energy – fast. It is not enough for wealthy countries to run on clean power if they continue to produce and export fuels that crash the climate when they are burned elsewhere. Profiting from emissions made elsewhere may make for a handy accounting trick, but the consequences of those carbon emissions will be felt by all of us, with countries in the Global South shouldering the greatest burden.

With US President Joe Biden now occupying the White House – on the eve of a climate summit hosting 17 of the world’s largest carbon emitters – many across the planet hope that we might see action on climate from the United States commensurate with what science and justice demand. As one of the world’s most influential countries and most egregious climate polluters, the US has an opportunity and responsibility to make significant contributions to a safe and stable world. To truly claim the mantle of climate leader, President Biden must seize the moment to commit to phasing out the climate emergency’s main driver: the fossil fuel industry.

Biden can do two things right now to kick off a fossil fuel phaseout. First, take executive action, and put pressure on Congress, to eliminate billions in taxpayer handouts going to oil, gas and coal companies from the federal government each year. Public money that could be freed up to invest in domestic recovery by creating jobs in upgrading public infrastructure, or a just transition led by workers and affected communities, and to support vaccines globally. Those funds could also begin to support climate-vulnerable countries so they can adapt to a heating world and transition to clean energy, instead of propping up a failing and deadly industry.

Second, if the US is serious about addressing the climate crisis, it needs to reinstate the crude oil export ban. When Democrats permanently traded it away for temporary renewable energy tax credits in the last decade, it was one of the biggest handouts yet to the oil and gas industry. A Greenpeace and Oil Change International report recently found that reinstating the US crude oil export ban could lead to reductions in global carbon emissions of as much as 73 to 165 million metric tonnes of carbon dioxide-equivalent each year. The oil export ban should be brought back and expanded to cover any fuel that puts the future of life on Earth in peril.

The fossil fuel economy is not just obsolete: it trades in inequality and exploitation. Black, Indigenous, People of Color (BIPOC) and marginalised communities worldwide have endured a disproportionate burden of toxic pollution and climate impacts, while a small cartel of fossil fuel executives, backed by their governments and impermeable finance systems, rake in hundreds of billions of dollars in profits.

Since 2016, 60 of the world’s largest banks have pumped more than $3.8 trillion into the fossil fuel industry, despite the signing of the Paris climate accords in 2015. This has led to fossil fuel financing being higher in 2020 than in 2016. And the big oil, coal and gas bosses are cashing in: their CEOs’ compensation, often in excess of $10m, is linked to the continued extraction of fossil fuels, exploration of new fields and the promotion of strong market demand through advertising, lobbying and government subsidies. Governments need to stand up and say, “No more.” People and the planet must come before profit.

It should not only be up to those most affected by the climate crisis, like Bacason, to fight for our collective future. We need leaders, like President Biden, to use their power to do what is not only necessary but is ethical and urgent. It is time to transition to a world beyond fossil fuels – because our lives depend on it.