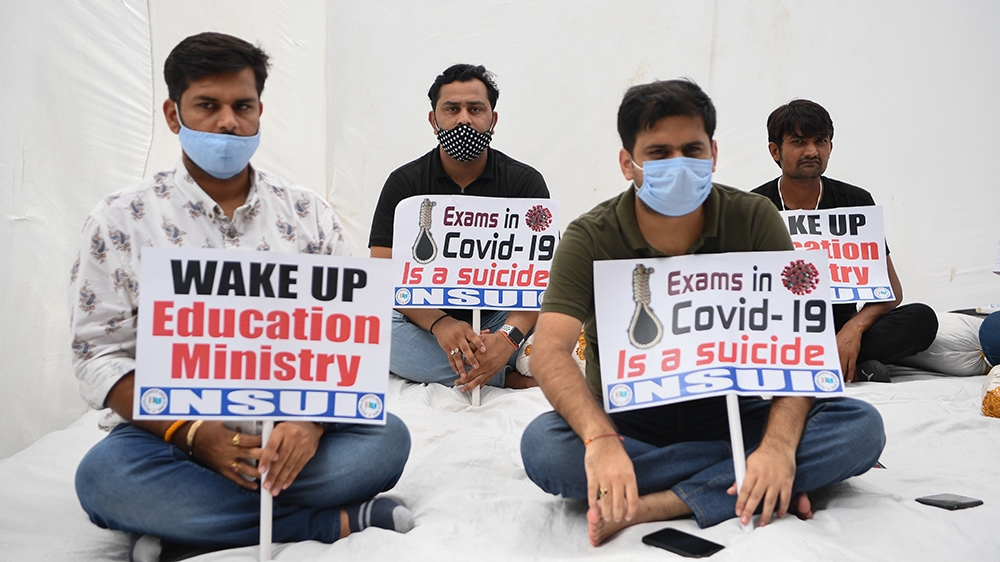 More than two million Indian students will sit for admissions tests to medical and engineering schools next week, the government said on Wednesday, despite growing concerns that the move could fuel a jump in coronavirus infections.

Many students, parents and opposition leaders have opposed the government’s move to hold the tests in the middle of a pandemic.

Many students have to travel long distances and there is a risk of infections, said the All India Students’ Union, a group that represents university students. It urged students to wear black armbands and join online protests to put pressure on the government to postpone the tests until infection rates fall.

Nearly 5,000 students took part in a virtual hunger strike at their homes in protest on Tuesday.

Students on social media have expressed concerns over health risks and availability of transport to the centres as public transport still remains restricted.

Member of Parliament Rahul Gandhi said students concerns due to COVID-19 crisis, lack of transport and flooding in Assam and Bihar states are genuine.

“GOI [Government of India] must listen to all stakeholders and find an acceptable solution,” he tweeted.

“It’s deeply unfair that students of India are asked to sit national exams during the COVID-19 pandemic and while millions have also been impacted by the extreme floods,” Thunberg said on Twitter on Tuesday.

‘In the interest of students’

But the government has released exam protocols, including social distancing and fever checks.

The National Testing Agency (NTA), which will organise the JEE and NEET exams, said the tests are being done in the “interest of students and the country”.

On Monday, the Supreme Court dismissed a plea for postponement, saying the delay would result in an unacceptable loss of the academic year.

India reported more than 75,000 infections, maintaining the world’s highest single-day caseload since August 7, a Reuters tally showed. With 3.2 million cases, it ranks third after the United States and Brazil, though its 59,449 deaths are far fewer.

Now the government is pushing for a return to normalcy to lessen the economic pain, after having imposed a strict early lockdown of India’s 1.3 billion people in March.

“We are very mindful of the safety of our students, we will take full precautions,” Education Minister Ramesh Pokhriyal told state radio, adding that the tests had to be held to ensure students did not lose a year.

Already twice postponed this year, the tests will be spread over several days and will be held at more centres than usual, to ensure there is no crowding.