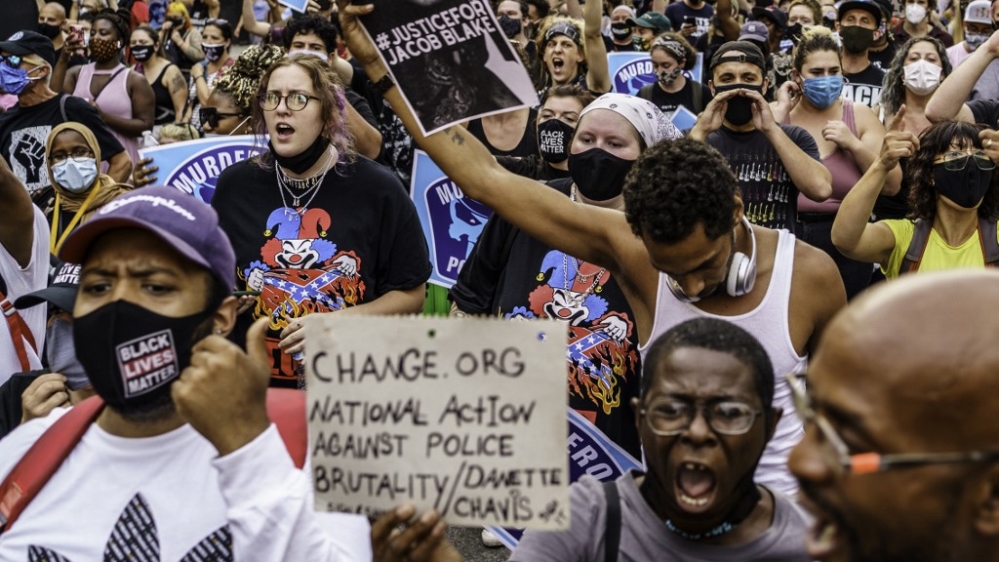 Relative calm returned to Kenosha, Wisconsin, overnight Wednesday into Thursday after two people were shot dead during protests the night before, while unrest in Minneapolis prompted the governor to declare a state of emergency, as the United States continues to grapple with racial injustice.

Kenosha authorities had on Wednesday identified the officer who fired seven shots at the back of Jacob Blake, paralysing the Black man, and sparking anti-racism protests.

After three nights of civil strife – including arson, vandalism and the shootings that killed two people on Tuesday night – calm appeared to take hold in Kenosha.

Violent protests had erupted on Wednesday night in the Midwestern city of Minneapolis, 598km (372 miles) northwest of Kenosha, following the death of a Black homicide suspect who, police say, shot himself.

The governor of Minnesota declared a state of peacetime emergency.

The city has been the centre of protests following the death of George Floyd, a 46-year-old African American man, who died in May after a police officer knelt on his neck for nearly nine minutes.

Floyd’s death and further violence against Black people have led to broader anti-racism protests and demonstrations against police brutality in cities across the US.

Minneapolis Mayor Jacob Frey imposed a curfew following what he described as mass looting of businesses, destruction of property and unrest. Authorities also said misinformation was spread concerning the death of the suspect.

A video posted on social media, which could not be verified immediately by Reuters news agency, showed shots being fired and ransacking of shops.

Minneapolis police posted a surveillance video of the shooting on Twitter, saying that the victim, a suspect in a homicide, committed suicide and that no weapons were fired by police.

The video shows a Black man shooting himself at the entrance of a building as a nearby group of people ran away and police approached the scene.

Other unverified videos posted on social media appeared to show police shooting demonstrators with less-lethal munitions as they moved away from authorities.

Minnesota Governor Tim Walz declared a state of emergency in Minneapolis and said the National Guard would be deployed in the area.

“Dangerous, unlawful behavior will not be tolerated. The Minnesota National Guard and State Patrol are headed to Minneapolis to help restore order,” Walz said in a statement.

Minneapolis, it’s time to heal. We must rebuild and recover. Dangerous, unlawful behavior will not be tolerated. The State Patrol is headed to Minneapolis to help restore order. I remain in close contact with the city and every state resource stands ready to help bring peace.

Wisconsin Attorney General Josh Kaul had on Wednesday identified Rusten Sheskey as the white police officer who shot Blake after the latter opened his car door on Sunday. Blake’s three young sons were in the car. Kaul also said investigators found a knife on the floor of Blake’s car.

Rifle-toting civilians had come to Kenosha during the protest, among them 17-year-old Kyle Rittenhouse, who was arrested on Wednesday on homicide charges in connection with Tuesday night’s shootings. Rittenhouse, a police supporter, was arrested at his home in Antioch, Illinois, about 30km (20 miles) away.

Anti-racism protests have become a polarising issue ahead of the November 3 presidential election, which Vice President Mike Pence and other Republicans described as a choice between “law and order” and lawlessness at their national convention on Wednesday.

“The hard truth is you won’t be safe in Joe Biden’s America,” Pence told the crowd seated on a lawn at historic Fort McHenry in Baltimore in reference to the Democratic challenger to President Donald Trump.

Police in Portland, Oregon, had on Wednesday declared a demonstration near a US immigration agency building as an “unlawful gathering”, ordering the crowds to disperse. Police said they made 11 arrests in the city which has been the scene of weeks of anti-racism protests and unrest.

Violent protests also erupted in Oakland, California, resulting in the arrests of several people after multiple fires were set during the demonstrations, according to police.

Oakland police said on Twitter a fire was started at the Alameda Superior Court by people who protested in solidarity with Wisconsin demonstrators on Wednesday.

The National Basketball Association (NBA) postponed three play-off games scheduled for Wednesday after the Milwaukee Bucks, protesting against racial injustice, boycotted Game 5 of their play-off series against the Orlando Magic.

NBA players and officials were to meet on Thursday to decide whether the boycott would continue.

Tennis player Naomi Osaka pulled out of the semi-finals of a tennis tournament in Ohio on Wednesday in protest against the shooting of Blake.

Osaka, who has a Japanese mother and a Haitian father and has been a vocal supporter of the “Black Lives Matter” movement, said in a social media post: “Before I am an athlete, I am a Black woman.”

Brahim Bouhlel and Zbarbooking jailed in Morocco over video

Actor Brahim Bouhlel and influencer Zbarbooking are seen swearing at children in a viral clip.

Umeme Turns Up the Heat on Electricity Thieves in Bukedi

Leading power distributor Umeme has picked up the threads of the anti–power theft operation it launched in March. It has fanned out from Central Uganda, Jinja, 80 kilometres East of Kampala, and now to Mbale city, even farther East with an excursion in Bukedi region launched today.

The operation is meant to check illegal connections, meter tampering, and to ensure bills due are settled. It comes on the heels of the increase in energy losses by one percentage point – from 16.4% to 17.5% – between 2019 and 2020.

To underscore the importance of the task, Umeme together with local leaders with support from the Uganda police combed through the township of Palisa, Kibuku and Budaka for suspected electricity thieves.

“Bukedi region covering Pallisa, Kibuku and Budaka are supplied through a power line that carries 1 million units of power and of which power losses average 400,000 units monthly, an average loss of 36%,” Trevor Kigenyi the Regional Manager Eastern Uganda said.

This accounts for 15% of the total loses in the Bukedi Elgon region losses. This amounts to Ushs 3.6 billion in lost revenue every year.

John Baptist Nuwamanya, the Umeme Metering services engineer says the region has a customer base of 3143 customers of which 153 are small and medium enterprises, 3 phase maize millers with 10 medium industrial maize millers.

In these areas, up to 928 people had by the close of last week been apprehended on suspicion of pinching electricity since the operation was launched.

Some had pirate wires connecting their premises to the overhead the national grid while others could not account for the underground cables linking their homes to the grid.

As police officers took the suspects’ statements, many confessed and offered to pay for the power they have been consuming as well as to formalise their connections.

A 17.5% loss of electricity in transit between a, say, 724 megawatt (MW) power generation plant and households translates into 126.7%.

The 126MW that is dissipated as heat and commercial loss is sufficient to drive up to four factories of Roofings Namanve’s scale.

Power theft stalls the official connection rates since those who should be looped in use the service illegally.

The vice deprives the utility of cash needed for operations and maintenance, which leads to the deterioration of the network.

The Head of Communications and Marketing, Peter Kaujju, said Umeme will not relent in the fight against electricity theft.

“The key function of this Komboa operation is to weed out illegal connections and to ensure people have access to our service in a safe manner clearing following the set electricity connection procedures,” Mr Kaujju said at the launch of operation in Pallisa.

The Electricity Act provides for fines and jail terms for those convicted of electricity theft.

Senior Supretendant of Police Ashraf Chemonges who represented the Inspector General of Police cautioned the public to desist from stealing power and vandalising electricity equipment.

The Pallisa Resident District Commissioner Ms Farida Mayanja Mpiima urged the community to be patriotic by preserving government efforts. She commended Umeme for her efforts and said she will join them in community barazas to sensitise public against power theft.

The post Umeme Turns Up the Heat on Electricity Thieves in Bukedi first appeared on ChimpReports.

Brahim Bouhlel and Zbarbooking jailed in Morocco over video