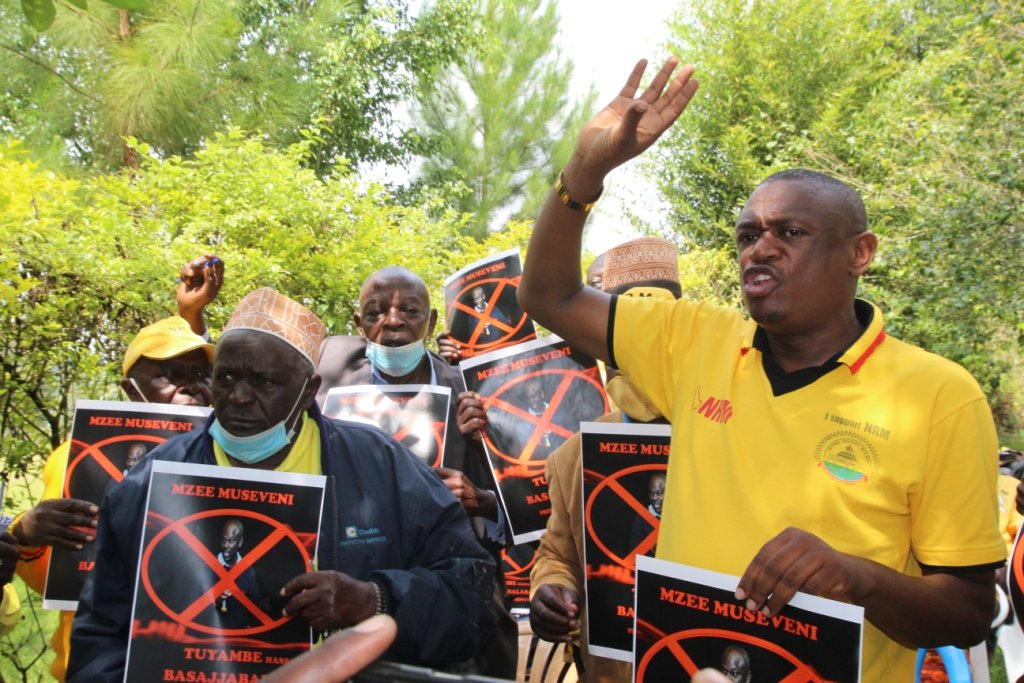 In a meeting held at Bettina Hotel in Bushenyi, the angry members who were holding anti-Basajjabalaba placards signed a petition in which they accused the latter of threatening to tear up the party.

In the petition titled ‘The Unbecoming Behavior Of The District NRM Chairperson’  members accused Basajjabalaba of failure to play an impartial role during the recent party elections, disrespecting party leaders and candidates, openly involving himself in voter bribery while supporting a section of candidates against others, conducting open rallies in different areas with massive gatherings that flout the presidential directives and Standard operating procedures as laid out by the ministry of health concerning the COVID 19 pandemic, financing illegal activities and undermining elected leaders, dividing the Muslim community, among others.

“These actions and conduct are detrimental to unity and continuity of our party and threatens our highly projected performance of our National Party Presidential Flag bearer and the NRM party in general,” the petition reads in part.

Basajjabalaba is further accused of promoting electoral violence against party candidates which left about five people seriously injured and admitted in different hospitals on the verge of losing their lives.

“The chairman has recruited a group of hooligans he has sponsored to engage in violent activities that has left four people badly injured and currently hospitalized at Mbarara regional referral hospital in critical conditions” says Yassin Kyota, the NRM chairperson Ishaka Division

It is from this that the NRM stakeholders appealed the president to refrain Bassajjabalaba from partial and selective participation in NRM primary elections before district NRM members defect to opposition political parties.

The members also want the security agencies in Bushenyi district to “apprehend the criminal gangs under the District Chairman’s sponsorship.”

He suspects that by the end of NRM primaries, most candidates will have thought of standing on independent tickets because of the rough political terrain in the district.

In response however, the accused (Hassan Bassajjabalaba) dismissed all the allegations against him calling for peaceful and fair elections among all party candidates in Bushenyi district.

“That’s not true, I condemn violence and I will never support that violence. My interest is to have a fair election and for the people to vote for capable leaders” says Bassajjabalaba

He instead accused some of the aspiring party candidates of attempting to tarnish his name after failing to fulfill all the credentials to represent the district.

“Is Annet educated? Let her produce her O’level certificate and even show us where she studied from.

On voter bribery, Mr. Bassajjabalaba claimed he was only fulfilling the 2016 pledge he promised to sub county NRM party chairpersons after massively voting for President Museveni.