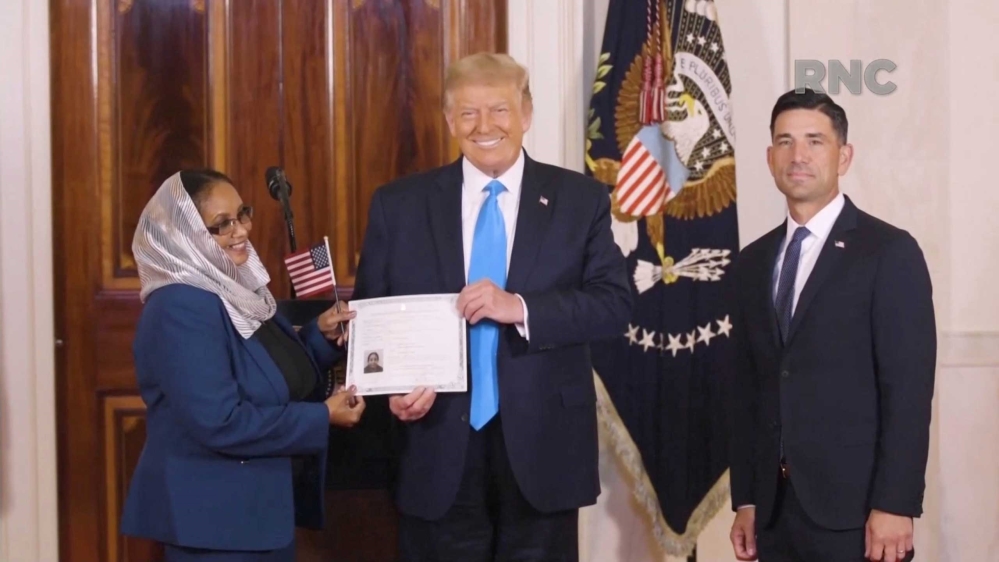 Night two of the Republican National Convention saw US President Donald Trump fully embrace the blending of official White House work and government property with political campaigning in what some observers have called an “unprecedented” fashion.

Critics had already questioned Trump’s plans for himself and his wife, First Lady Melania Trump, to deliver convention speeches from the White House, saying the backdrop raised ethical concerns. Melania went through with the speech as planned on Tuesday. Trump is slated to speak from the South Lawn of the White House on Thursday.

On the second night of the four-day convention, exhibiting the reality show flair upon which Trump has built his reputation, the president further melded the Republican convention with two more orders of White House business – segments that showed Trump signing an official pardon and overseeing a naturalisation proceeding, both from the seat of the executive branch.

Thomas Whalen, a Boston University political historian, said that no sitting president in recent history has combined the office with the campaign in the way Trump has during the convention.

He called the administration’s actions “unprecedented” and possibly illegal.

“The White House is called the ‘people’s house’, not the Republican house or the Democratic house,” Whalen told Al Jazeera. “It just flies in the face of decorum and tradition in this country.”

The Hatch Act was the wall standing between the government’s might and candidates. Tonight a candidate tore down that wall and wielded power for his own campaign. Citizen Trump is no longer presenting himself as a candidate. Now your government is telling you who should rule you.

Ethics and legal experts have charged the administration’s actions showed flagrant disregard for laws that arguably severely limit the use of public federal properties for partisan politics and that ban executive branch civilian employees, excluding the president and vice president, from participating in political campaigns in their official roles.

The first instance on Tuesday, about 15 minutes into the programme, was a pre-taped segment showing Trump sign the pardon of Jon Ponder, a man convicted of robbing banks who now runs a non-profit that helps former prisoners re-enter society.

“I will continue to give all Americans, including former inmates, the best chance to build a new life and achieve their own American dream,” Trump said during the segment.

US President Donald Trump, next to Jon Ponder and his wife, and former FBI agent Richard Beasley, after signing Jon Ponder’s pardon [Reuters]

The second portion, coming about an hour and a half into the event, saw Trump overseeing a naturalisation ceremony conducted by acting Secretary of Homeland Security Chad Wolf.

“You followed the rules, you obeyed the laws, you learned your history, embraced our values and proved yourselves to be men and women of the highest integrity,” Trump said, in an apparent attempt to rebut condemnation of his immigration policies that have made naturalisation more difficult for documented and undocumented immigrants.

The Hatch Act, titled “an act to prevent pernicious political activities”, was passed in 1939 and was upheld by the Supreme Court in 1973.

The law is meant to prevent a system where officials appointed by the president “are openly campaigning in support of their patron,” according to Whalen.

“That perpetuates a certain corruption that, if left unchecked, would basically corrode the whole foundation of a democrat Institutions of the Republic,” he said.

The Hatch Act is a civil law, so violations only lead to administrative penalties, not criminal ones. So the Trump administration ignores it.

You know what else is only a civil violation that usually carries administrative penalties and not criminal charges?

While presidents and vice presidents are not banned from campaigning in their official capacity under the Hatch Act, the use of federal properties like the White House is almost assured to require the use of public resources and executive staff, Erwin Chemerinsky, the dean of the University of California Berkeley School of Law wrote in an op-ed in the Los Angeles Times.

“An underlying concern of the Hatch Act is that it is wrong for an incumbent to use the resources of the federal government, its employees or its financial resources, to help an election campaign,” he wrote. “It is not fair and it distorts the democratic process.”

The appearance of Wolf in an event designed to be part of the convention also may represent a direct violation of the act, Kathleen Clark, a legal and government ethics professor at Washington University in St Louis School of Law, told the Washington Post, describing Trump and Wolf as “breathtaking in their contempt for the law”.

The White House, for its part, has rebutted the criticism, with spokesman Judd Deere saying the president “is free to engage in political activity wherever he chooses”, and that “RNC Convention events will be planned and executed, at whatever the venue, by the Trump Campaign and RNC”, and that any federal employees involved will do so “in compliance with the Hatch Act”.

.@SecPompeo’s participation in the #RNCConvention during the course of official @StateDept work is not only unacceptable, but appears that it may also be illegal.

Perhaps the most potentially legally and ethically murky portion of the night came from Secretary of State Mike Pompeo, who critics say broke diplomatic norms, State Department guidelines and possibly the law, by appearing in a pre-recorded video on an official trip to Jerusalem.

The White House, RNC and State Department lawyers have said they conducted a legal analysis of the speech before it aired and determined there was no wrongdoing. The details of that analysis have not been made public.

House Democrats on Tuesday announced they had launched an investigation into the speech.

“It is highly unusual, and likely unprecedented, for a sitting Secretary of State to speak at a partisan convention for either of the political parties,” wrote Representative Joaquin Castro in a letter to Deputy Secretary of State Stephen Biegun.

“It appears that it may also be illegal,” he added.