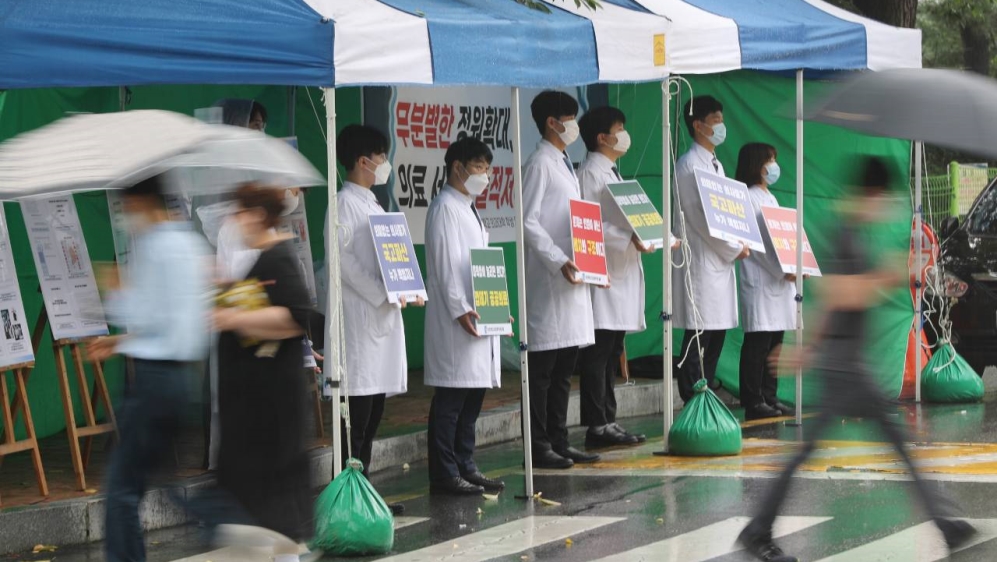 Tens of thousands of doctors launched a full-scale strike nationwide on Wednesday, defying a return-to-work order and threats of punishments to protest of the government’s medical workforce reform plan, as the country grapples with the resurgence of coronavirus cases.

The three-day strike is organised by the Korean Medical Association (KMA), which has some 130,000 members, including interns and resident doctors at general hospitals and practitioners at neighbourhood clinics.

The strike action comes following weeks of walkouts and as South Korea continues to battle a resurgence of COVID-19, with the government reporting on Wednesday at least 320 new cases in the previous 24 hours.

The medics are opposed to government plans to boost the number of medical students across several years, establish public medical schools, allow government insurance to cover more oriental medicine, and broaden the scope of telemedicine. They said the money would be better spent on improving pay and conditions to encourage more people to work outside Seoul.

An unknown number of neighbourhood clinics were also closed on Wednesday. About 33 percent of the practitioners closed their clinics during their first strike earlier this month, according to Yonhap.

Earlier in the week, the doctors reached an agreement with the government to continue to handle coronavirus patients, but failed to find a compromise on their broader concerns.

“The government now has no choice but to take necessary legal actions such as an order to open business to not put the citizens’ lives and safety in danger,” Health Minister Park Neung-hoo said in a briefing.

“We urge all trainee and fellow doctors to immediately return to work.”

Those who do not follow the government order without probable cause could have their licences revoked and even face a maximum jail term of three years or a fine of less than 30 million won ($25,000).

He said the KMA and the Korean Intern Resident Association (KIRA) had rejected several of the government’s offers.

The three-day strike is organised by the Korean Medical Association, which has some 130,000 members, including interns and resident doctors at general hospitals and practitioners at neighbourhood clinics [Jeon Heon-kyun/EPA]

In a statement, KMA said the medical community was always open to all possibilities in talks with the government, and that the doctors did not want to have to strike.

“We sincerely do want to return,” the statement said. “We ask you citizens to listen to our voice so that we can meet our patients as soon as possible.”

The government said its goal to increase the number of medical students by 4,000 during the next 10 years is necessary to better prepare for public health crises like the coronavirus pandemic.

Student doctors, however, said the plan would unnecessarily flood an already competitive market, and that the extra funding would be better spent improving the salaries of existing trainees, which would encourage them to move out of Seoul to rural areas where more health professionals are needed.

On Tuesday, both the doctors and the government agreed to launch working-level consultations.

But the talks have yet to generate a significant breakthrough, prompting the doctors to press ahead with the full-scale walkout.

South Korea has reported a total of 18,265 coronavirus cases, and 312 deaths, including two additional fatalities, reported on Wednesday, but the authorities are concerned the country is on the brink of a large outbreak after days of triple-digit increases in cases.