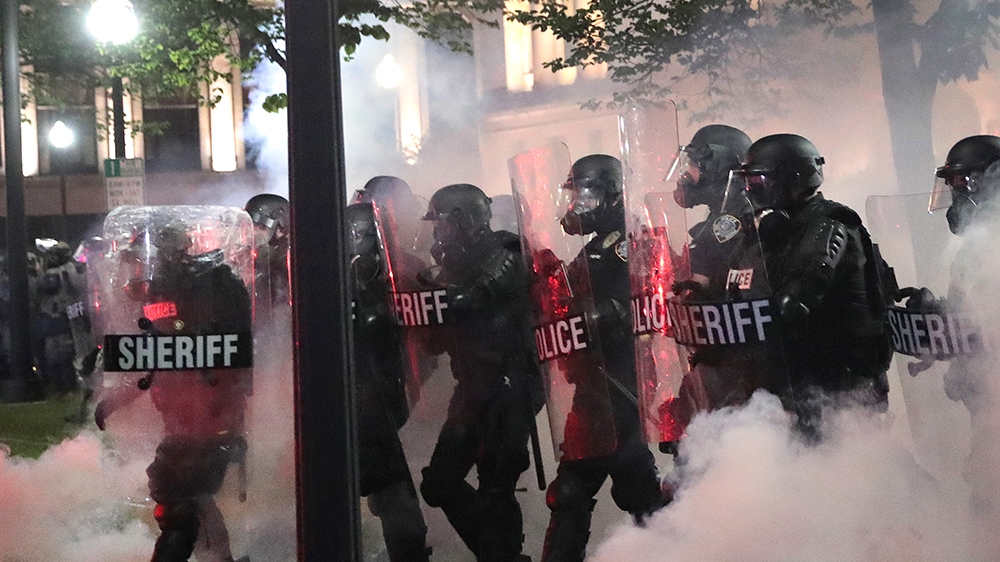 A teenager identified as Kyle Rittenhouse has been arrested and charged with homicide on Wednesday after gunfire killed two people and wounded a third during protests over the police shooting of a Black man in Kenosha, Wisconsin, court officials said.

The lakeside city has been rocked by civil unrest since Sunday, when police shot Jacob Blake, 29, in the back at close range. That incident, captured on video, has reignited protests over racism and police use of force in the United States.

The violence prompted some elected officials to call for a reinforcement of National Guard troops or the deployment of federal law enforcement officers.

Rittenhouse, 17, was arrested on a warrant in Illinois and charged with first-degree intentional homicide in Kenosha, a Lake County court official said.

Julia Jackson, the mother of Jacob Blake, a Black man who was shot several times in the back by a police officer, speaks during a news conference outside the Kenosha County Courthouse [Stephen Maturen/Reuters]

Kenosha Police Chief Daniel Miskinis confirmed a 17-year old from Antioch, Illinois was in custody in another state and efforts were being made to bring him back to Wisconsin.

“What I can’t tell you is what led to that disturbance, what led to use of deadly force,” Miskinis said.

Miskinis said the events surrounding Blake’s shooting were being investigated by the criminal division of the Wisconsin Department of Justice “to give it the outside view” and that he had no knowledge of the investigation as mandated by Wisconsin law and procedure.

Two people were killed on Tuesday night in an attack carried out by a young white man, alleged to be Rittenhouse, who was caught on cellphone video opening fire in the middle of the street with a semi-automatic rifle.

“I just killed somebody,” the person could be heard saying at one point during the shooting rampage that erupted just before midnight.

One victim was shot in the head and the other in the chest, Sheriff David Beth told the Milwaukee Journal Sentinel. A third person suffered gunshot wounds not believed to be life-threatening. 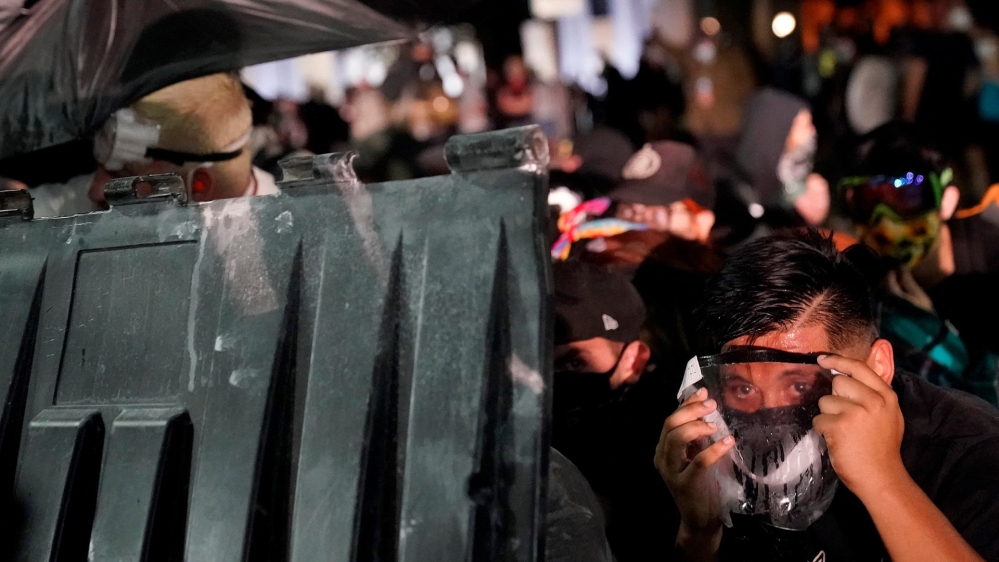 According to witness accounts and video footage, police apparently let the gunman walk past them and leave the scene with a rifle over his shoulder and his hands in the air as members of the crowd were yelling for him to be arrested because he had shot people.

As for how the gunman managed to leave the scene, Beth portrayed a chaotic, high-stress scene, with screaming, chanting, nonstop radio traffic and people running all over — conditions he said can cause “tunnel vision” among law officers.

A video posted by The Daily Caller, a right-wing news and opinion site, appears to show Rittenhouse answering questions during an interview on Tuesday night.

When asked what he was doing, Rittenhouse replies: “So people are getting injured and our job is to protect this business, and part of my job is to also help people. If there is somebody hurt I’m running into harm’s way. That’s why I have my rifle because I need to protect myself, obviously. I also have my med kit.”

Rittenhouse also appears to be a supporter of law enforcement, The Daily Beast reported. The website referenced a 2018 post by Rittenhouse which asks people to donate to a group called Humanizing the Badge (HTB).

The post reads: “I’ve chosen this nonprofit because their mission means a lot to me, and I hope you’ll consider contributing as a way to celebrate with me”, The Daily Beast said. “HTB is a non-profit organisation seeking to forge stronger relationships between law enforcement officers and the communities they serve. We’re doing this through community service projects, mental health support, social media content and strong partnerships with others blazing new paths.”

The governor’s office said he was working with other states to bring in additional National Guard troops and law officers.

“We were all chanting ‘Black lives matter’ at the gas station and then we heard, boom, boom, and I told my friend, ‘That’s not fireworks’,” 19-year-old protester Devin Scott told the Chicago Tribune.

“And then this guy with this huge gun runs by us in the middle of the street and people are yelling, ‘He shot someone! He shot someone!’ And everyone is trying to fight the guy, chasing him and then he started shooting again.”