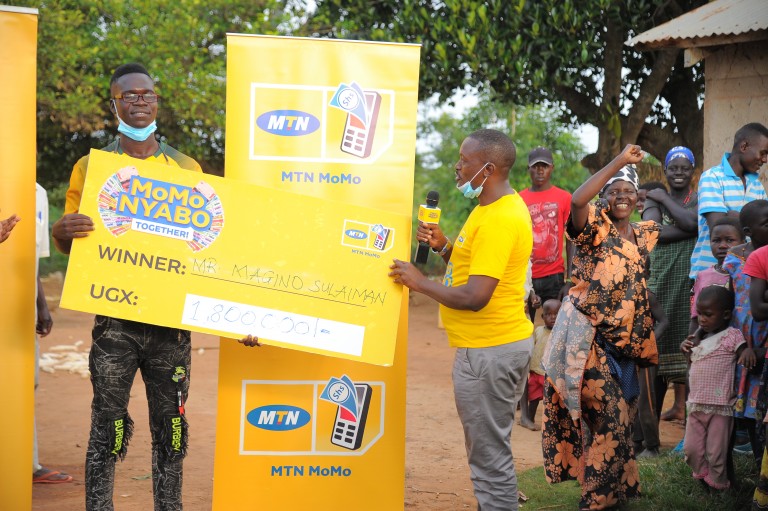 One of the biggest effects COVID-19 has caused is the closure of schools and learning institutions. The uncertainty that most students are going through is mind blowing especially because most are not sure when exactly schools will reopen. Their parents’ biggest fear however is the fact that they will be required to pay tuition, something many of them will grapple with considering the financial disruption caused by the pandemic that has left many of them without a stable source of income.

However, it is a different story for Sulaiman Magino and his parents. The senior four student from Pallisa won UGX 1,800,000 in the on-going MTN MoMoNyabo Together promotion.

The 22 year old senior four student of Mbale Progressive Secondary School danced as he received the money he won in total disbelief, saying he had never held such a huge amount of cash in his entire life.

“For the last six months I haven’t held as much as 50,000 shillings,” said an overjoyed student. Magino is a candidate who expected to sit for his final O level examinations this year was demoralized with how COVID-19 prevented him and all the other students from carrying on with their studies normally from school.

On the brighter side however, Magino was thrilled by the fact that even when schools resume, he would be able to afford school fees for his final O level year. He also intends to help his parents with the money he won. “I will start a shop for them to sell their produce seeing as they are peasant farmers,” he added.

Magino decided to share the money he won with his best friend Samuel Olupot. “We play soccer together and are in the same school and class,” he said.

Olupot was excited that his very good friend Magino shared this win with him; “I intend to start a business in selling maize, millet and groundnuts produce that will grow this money that I have won,” Olupot said.

Apart from the winners called in studio, 250 people win 50,000 shillings directly every day. All you have to do is pay using MTN MoMo and stand a chance to win

Use Mobile Money to pay for everything including airtime, data, voice bundles, yaka, water, television subscription and so much more. Watch the live draw game shows every weekday at 8.20pm on NBS TV and Bukedde TV hosted by Zahara Totto and Patricko Mujuuka. You could be the next winner because with MoMoNyabo together, everyone is a winner.

I can handle witchcraft in the music industry through prayer