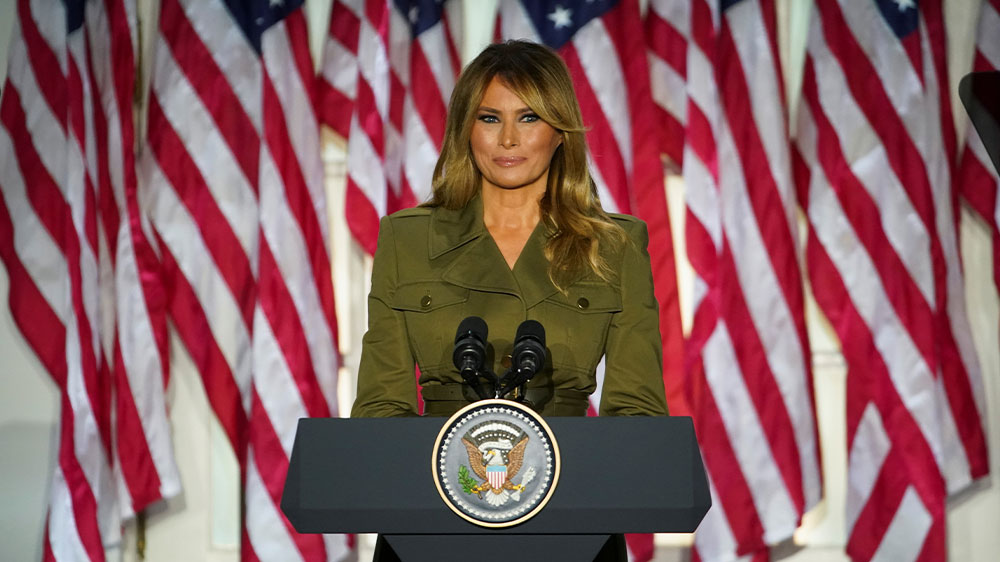 The US Republican Party put on a virtual convention programme on Tuesday painting a picture of President Donald Trump’s presidency as inclusive of women, family, immigrants, and Black Americans at a time of deep political division within the United States.

Under a repeating theme of restoring a promise of a better future for the nation’s children and grandchildren, Republicans from many walks of life and ethnicities – including Hispanics and Native Americans – advocated for Trump’s re-election.

Speakers touched on Trump’s positions on a range of issues from foreign policy to war in the Middle East, economics, abortion, the news media, Cuba, socialism, and immigration.

First Lady Melania Trump gave a 31-minute speech before a live audience of Republican legislators at the White House, in which she called for unity and civility among Americans who have been divided by race, politics and inequality under her husband’s presidency.

“We must remember that today we are all one community comprised of many races, religions and ethnicities,” Mrs Trump said.

“Our diverse and storied history is what makes our country strong, and yet we still have so much to learn from one another,” she said, calling on Americans to “take a moment, pause and look at things from all perspectives”.

The First Lady’s speech capped a two-and-a-half hour televised programme consisting of pre-recorded and live speeches staged at a mostly empty hall in Washington, DC, instead of Charlotte, North Carolina, where the convention was to have been held. She also offered sympathy to the thousands of Americans who have lost loved ones to COVID-19.

The US is struggling to contain the coronavirus with more cases – closing in on six million – and deaths – some 178,518 – than any other country in the world.

Two of the president’s children, Tiffany Trump and Eric Trump, offered praise and affection for their father and advocated for his political agenda, even as others decried alleged nepotism against his rival, Joe Biden.

Controversially, Secretary of State Mike Pompeo gave a short address to the Republican programme in which he outlined a series of claimed foreign policy accomplishments for Trump, including moving the US embassy to Jerusalem.

“The president moved the US Embassy to this very city of God, Jerusalem, the rightful capital of the Jewish homeland,” Pompeo said.

US attempts to unilaterally designate Jerusalem as Israel’s capital have drawn widespread condemnation from across the world including the Arab League, Palestinians and European nations, which have reaffirmed long-standing commitments to a Palestinian state with East Jerusalem as its capital.

Pompeo, who was on a diplomatic mission to Israel, addressed the Republican convention from the roof of the King David Hotel overlooking the Old City and Mount Zion. 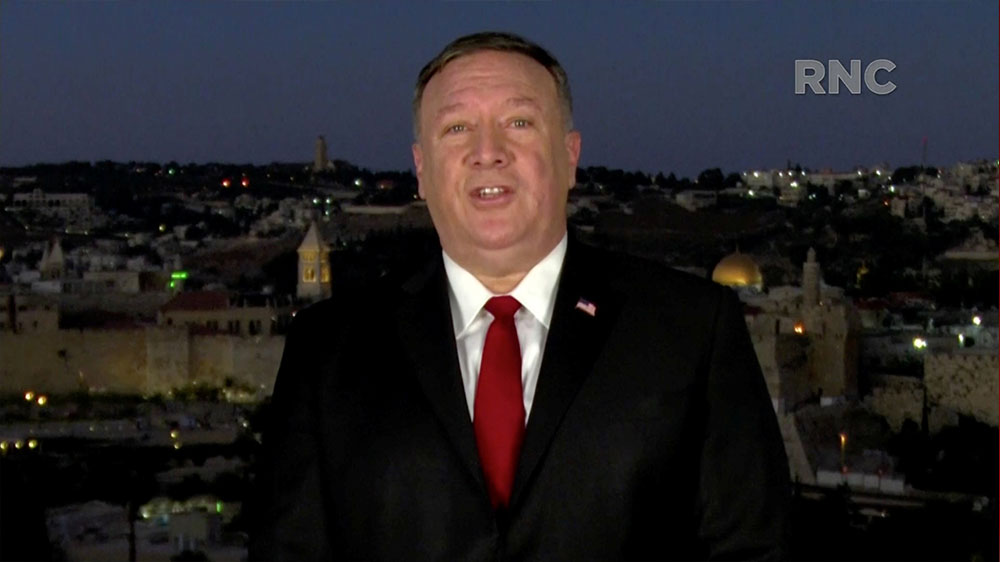 Pompeo cited Trump’s approval of a drone attack that killed Iranian General Qassem Soleimani in January and claimed credit for the defeat of ISIL (ISIS) in Syria.

“The president exited the US from the disastrous nuclear deal with Iran and squeezed the ayatollah, Hezbollah and Hamas,” said Pompeo, who is thought to be eyeing a run for president in 2024.

Pompeo’s participation in the Republican event breached an American governing tradition that holds US diplomats above politics, and drew widespread criticism.

Pompeo’s speech “tethers him and his office to the domestic political interests of the president’s re-election,” said Aaron David Miller, senior fellow at the Carnegie Endowment for International Peace, in a blog post on Tuesday.

Trump’s secretary of state is “the most politicized in modern American history and arguably the worst,” Miller said.

“I’m supporting President Trump because he believes, as I do, that a strong America cannot fight endless wars. We must not continue to leave our blood and treasure in Middle East quagmires,” Paul said.

Paul recalled accompanying Trump to Dover Air Force Base to honour two soldiers whose remains were coming home from Afghanistan. More than 2,400 US servicemen and women have been killed in the conflict.

“I will never forget that night. I can tell you the president not only felt the pain of these families but is committed to ending this war,” Paul said.

The Trump administration has engaged in talks with Taliban leaders and committed in February to the withdrawal of 12,000 US troops from Afghanistan.

Larry Kudlow, the White House economic adviser, sought to position Trump’s economic record as one of success until the pandemic forced a shutdown.

“It’s been a tough few months for all of us,” Kudlow said in taped remarks from Redding, Connecticut.
“We were enjoying the greatest economy our country had ever seen,” Kudlow said.

“Then the pandemic hit. It rocked us all back on our heels. But we’re Americans. We’re fighters. And so is our president,” he said.

In spite of unemployment data showing 30 million Americans still out of work and consumer confidence at a six-year low, Kudlow claimed the US economy is booming and poised for a rebound in the second half of the year.

Kentucky Attorney General Daniel Cameron, the first Black person elected to statewide office in the state, spoke to the racial division and Black Lives Matter protests that have reshaped US politics in recent months. 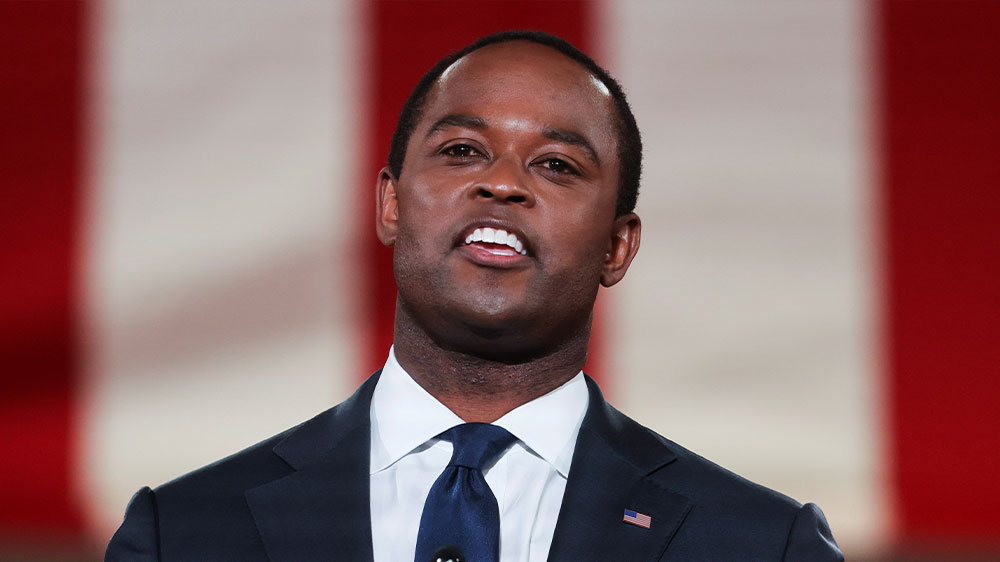 “Even as anarchists mindlessly tear up American cities while attacking police officers and innocent bystanders, we Republicans do recognise those who earnestly strive for peace, justice, and equality,” Cameron said.

“Whether you are the family of Breonna Taylor or David Dorn, these are the ideals that will heal our nation’s wounds,” he said.

Protests and civil unrest have hit more than 200 US cities in 30 states since George Floyd was killed by police who kneeled on his neck while he was handcuffed and held face down in the street in Minneapolis.

Trump a has adopted a “law and order” posture towards the protests which have at times devolved into looting, riots and violent skirmishes with police.