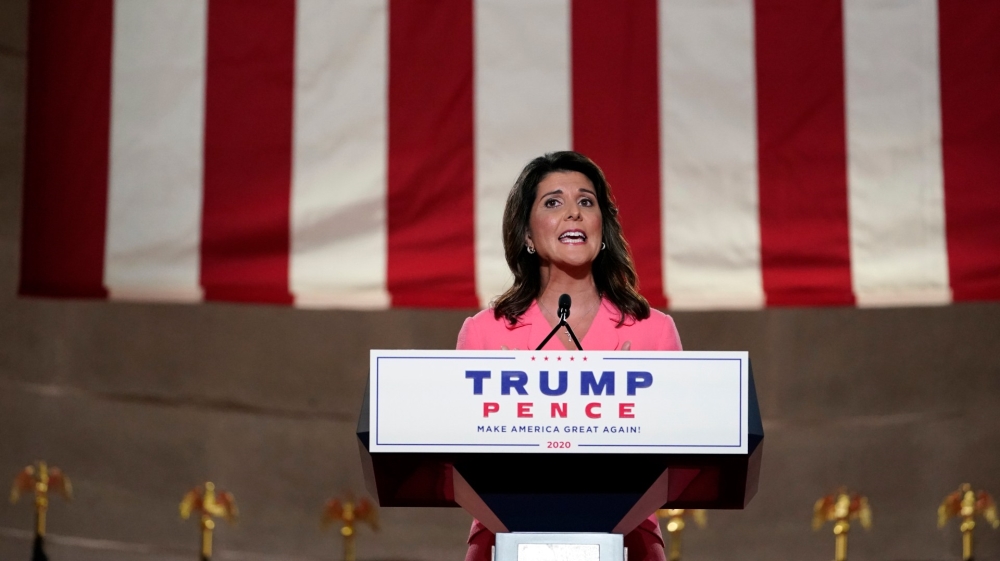 The first night of the Republican National Convention leaned into the topic of race, with a diverse lineup of speakers who derided Joe Biden’s past racial gaffes while hailing President Donald Trump’s policies.

The speakers included former US Ambassador to the United Nations Nikki Haley, who said calling the US racist had become “fashionable” for Democrats, as well as Senator Tim Scott, the chamber’s only Black Republican. Both sought to rebut accusation of racism against Trump and his administration, while highlighting their personal stories of success to portray the US as a country where any citizen, regardless of background, can triumph.

Critics have accused the president, whose early foray into politics included touting the unfounded – and widely considered racist – theory that former President Barack Obama had not been born in the US, of stoking racial tensions throughout his three-plus years in office.

Trump has provided regular fuel to those claims, including responding to a white supremacist march in Charlottesville, Virginia by saying there were “fine people” on both sides, his condemnation of the words Black Lives Matter as a “hate symbol”, and his administration’s recent crackdowns on racial justice protests across the country in the wake of the police-killing of George Floyd.

Speakers on Monday, however, sought to portray the Democrats, who have widely embraced the Black Lives Matter movement and enjoy vastly disproportionate support from Black and Latino voters, of selectively using race for political gain and treating minorities as monoliths. Recent polls show registered Black voters favour Biden by an average of about 67 percentage points over Trump.

“In much of the Democratic Party, it’s now fashionable to say that America is racist. That is a lie,” said Haley. The “proud daughter” of Sikhs who immigrated from India recalled her youth “I was a brown girl, in a Black and white world. We faced discrimination and hardship.”

“America is not a racist country,” added Haley, who has been widely criticised for the apparently contradictory statements.

When people like Nikki Haley trash the left for saying America is racist, but then tell personal stories of how their families were discriminated against, I wonder what is precisely the level of critique of racism in American politics, policy, and society that would please them

Meanwhile, Vernon Jones, a member of the Georgia House of Representatives and a rare elected Democratic official who has endorsed Trump, charged that Democrats have not made space in their party for Black “independent thinkers”.

“The Democratic Party does not want Black people to leave the mental plantation they’ve had us on for decades,” Jones said from the Mellon Auditorium in Washington, DC.

Others took a more personal tact, with Hershel Walker, a Black former American football player, saying of his 37-year friendship with the president: “I have seen racism up close. I know what it is. And it isn’t Donald Trump”.

The night’s most stirring speech – the final in the programme – came from Senator Scott, who recounted how his family “went from cotton to Congress in one lifetime”.

The Left doesn’t own me. I’m breaking the chains. pic.twitter.com/JfqFz9EwRx

He hailed the Republican Party as one where “voters judged me on the content of my character, not the colour of my skin,” while deriding Biden’s past racial gaffes, praising Trump’s policies on race, and condemning what he characterised as increasing polarisation.

“We live in a world that only wants you to believe in the bad news: racially, economically and culturally-polarising news,” said Scott.

‘The diversity of America’

Republicans appear to be responding to the expectation that they would be “raked over the coals” when it came to race representation at the convention, said Rina Shah, a former Republican strategist and political adviser who now supports Biden.

“The party, in its current form, does not reflect the diversity of America because party membership and party leadership is largely older and white,” she said.

The Left doesn’t own me. I’m breaking the chains. pic.twitter.com/JfqFz9EwRx

Shah added the messaging on Monday that focused on wanting to be judged on merit over race “was very successful” and is likely to “resonate with many people”, while noting it came from figures who have pegged their political futures to embracing Trump’s divisive brand of politics.

The night also embodied an at times awkward balancing act, focusing heavily on the theme of law and order and what Trump has described as the threat of US cities and suburbs being swallowed by violence. Critics said that messaging contains not-so-coded racial undertones.

Also featured were Mark and Patty McCloskey, a white St Louis, Missouri couple who became folk heroes among some conservatives after brandishing guns at Black Lives Matter protesters marching past their home.

Lenny McAllister, a Republican strategist who was the party’s candidate for a Pennsylvania congressional seat in 2016, told Al Jazeera that anyone who denies there is still work to do to overcome residual systemic racism in the US is “undervaluing the negative impact that racism has had on America for centuries”.

In the face of an increasingly diverse electorate, he said Republicans will have to find more ways to include minorities if the party wants to survive into the future, adding he personally found the speeches on Monday night “effective”.