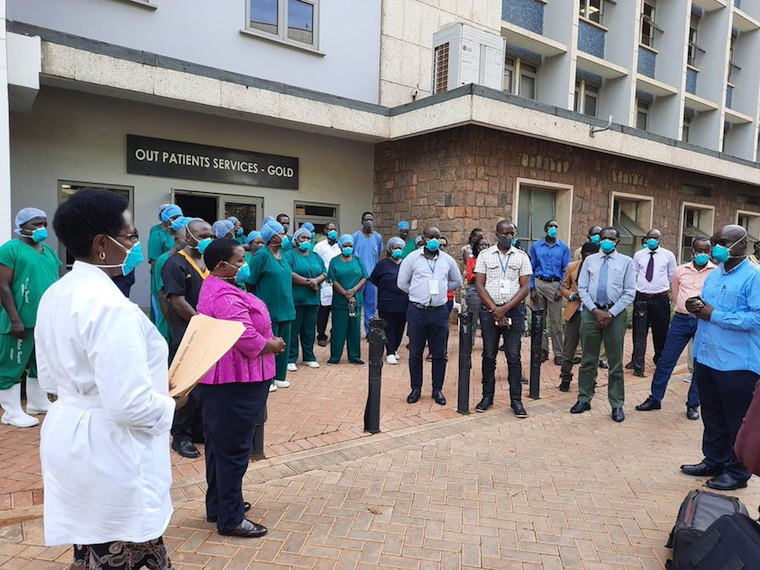 To control the surge in the number of people seeking to be screened for potential exposure to the coronavirus, Mulago national referral hospital has temporarily closed its Covid-19 sample collection centre.

The hospital insists it’s largely a treatment and isolation center.

“Mulago hospital is a treatment and isolation center. We don’t want patients moving in and meeting people dropping samples. It’s only VIPs, like MPs and ministers allowed to go there for sample collection since their number is not big,” Emmanuel Ainebyoona, the ministry of Health senior public relations officer, said in a weekend interview.

Interviewed at the weekend, Rosemary Byanyima, the deputy executive director of Mulago hospital, said the Covid-19 sample collection centre at the referral hospital was closed on Tuesday, August 18. She said all suspected cases and especially people who wanted to travel have been referred to Kiswa health center in Bugolobi and Makerere University for screening.

“Many people were coming at Mulago hospital, yet we are now concentrating on (Covid-19) case management,” she said.

As of Monday, August 24, Uganda had a total of 2,263 Covid-19 cases, 1,226 recoveries and 20 deaths. Ainebyoona said Mulago hospital’s Covid-19 collection centre has moved to Kiswa health centre in Bugolobi.

“There is a criterion at Kiswa health centre. Not all people should go there…If you don’t have signs and symptoms of Covid-19, or if you are not going to travel, don’t go there,” Ainebyoona said, adding that the ministry is working towards expanding sample collection centres.

He said many people with persistent symptoms of Covid-19 and who wanted to be tested, were usually referred to Mulago hospital to get their samples withdrawn and taken to different testing laboratories.

He said the ministry also accredited four private laboratories to test for Covid-19 at an individual’s cost to expand on the services. These are Medipal International hospital, MBN laboratories at Nakasero, Lancet Laboratories and Makerere University College of Health Sciences (Mulago).

Ainebyoona said through the ministry’s surveillance system, government picks samples of contacts of Covid-19 suspected cases from their homes. He said there is also a planned rapid assessment that will occur in greater Kampala Metropolitan, Wakiso and Mukono districts like what happened in other high-risk districts.

“We shall be selecting a number of people scattered across in these districts and test them. We shall also do risk basic testing; for example, if premise X has a case, then we test all the occupants and their contacts there,” he says.

Ainebyoona said it takes only 48 hours to know the results.

“Sometimes when the results delay, it is due to the running out of reagents or sometimes traffic jam affects movements of medical officers from sample collection centers to testing laboratories,” he said.

The ministry also has several psychotherapy teams that counsel people who are tested and found positive with Covid-19. The same team also visits different quarantine areas and hotels to counsel people from abroad.

Tests are free for all symptomatic cases in government facilities.

According to the World Health Organisation chief, the coronavirus disease pandemic could last for another two years.

The WHO has always been cautious about giving an estimate on how quickly the pandemic can be dealt with while there is no proven vaccine.
But on Friday, Tedros said that globalisation allowed the virus to spread quicker than the Spanish flu did in 1918. He added that the world now has the technology to stop it, which wasn’t around 102 years ago.

“And in our situation now with more technology, and of course with more connectiveness, the virus has a better chance of spreading; it can move fast because we are more connected now,” he told a briefing in Geneva.

“But at the same time, we have also the technology to stop it and the knowledge to stop it.
“We hope to finish this pandemic [in] less than two years, especially if we can pool our efforts.”

“That is really key with utilising the available tools to the maximum and hoping that we can have additional tools like a vaccine,” he added.

WHO’s emergencies chief Dr Michael Ryan noted the 1918 pandemic hit the globe in three distinct waves; the second wave, which began during the fall of 1918, was the most devastating.

“This virus is not displaying a similar wave-like pattern,” he said.
“When the virus is not under control, it jumps straight back up.”

Ryan added that while pandemic viruses often settle into a seasonal pattern, that didn’t appear to be the case for the Covid-19. More than 22.81 million people have been reported to be infected by the coronavirus globally since it was first identified in China last year and 793,382 have died, according to a Reuters tally.

The United States leads the world with 5.6 million confirmed cases and more than 174,000 deaths. Meanwhile, Britain’s coronavirus outbreak shrank again as the average number of people testing positive for the deadly disease dropped to below 1,000 for the first time in a week.

Doctors say the rise in cases is largely down to younger people becoming infected. Meanwhile, the World Health Organisation said the Balkans region is a “hotspot” for Covid-19 amid mounting speculation that Croatia could be added to the UK’s quarantine travel list.

The WHO said the Balkans have been a “concern of ours since early June” because of an increase in case numbers as it urged the region to impose additional measures to “nip transmission in the bud”.

Dr Catherine Smallwood told a WHO press conference: “The situation in the Balkans has been a concern of ours since early June when we started to see cases increase and it’s been very much a sub-regional hotspot over the summer period.”

This comes as France, Spain and Germany all reported their highest cases of coronavirus in months.  The new figures have been raising concerns about a second wave that could be hitting the continent.